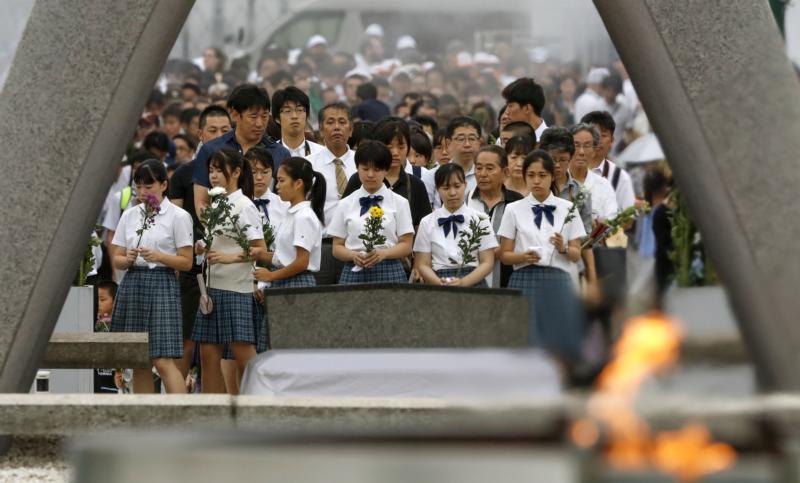 People in Hiroshima, Japan, pray for atomic bomb victims at Peace Memorial Park Aug. 6, 2019. Nuclear disarmament proponents will deliver messages of peace to the world in a campaign called The Ribbon 2020. The campaign commemorates the 75th anniversary of the atomic bombings of the Japanese cities of Hiroshima and Nagasaki. (CNS photo/Kyodo via Reuters)

CLEVELAND (CNS) — Nuclear disarmament proponents are returning to a creative and hope-filled tradition dating back 35 years to deliver messages of peace to the world and to inspire more people to take up the abolition call.

Called The Ribbon 2020, the campaign commemorates the 75th anniversary of the atomic bombings of the Japanese cities of Hiroshima and Nagasaki in August 1945.

It uses the creativity of individuals, families and communities desiring to express their hope for a world free of nuclear weapons through the window of 36-inch-by-18-inch banners that can be tied together to create one long colorful message of peace.

The effort, said Ursuline Sister Dianna Ortiz, deputy director of Pax Christi USA, is meant to reawaken awareness that “nuclear weapons, like climate change, are a threat to all that lives.”

Pax Christi USA has taken a lead role in promoting the ribbon project. Sister Ortiz said people from around the world plan to highlight their messages Aug. 1 through social media and by displaying their banners in windows, front yards, at churches and elsewhere.

This year’s ribbon campaign is patterned on The Ribbon of 1985, in which tens of thousands of people brought panels from their home communities, tied them together and assembled a continuous loop of peace messages that stretched around the Pentagon, to the White House and U.S. Capitol and back in a continuous loop.

That effort, forged by Colorado educator, activist and grandmother Justine Merritt, marked the 40th anniversary of the bombings of Hiroshima and Nagasaki, which is the center of Japanese Catholicism.

Peace activists and people of faith across the U.S. and around the world held similar events at the time in a sign of unity in the call for nuclear disarmament.

While the thousands of banners tied together in one long ribbon won’t be possible this year because the coronavirus pandemic is preventing large gatherings of people, the message participants will bring to the world’s nine nuclear powers is just as vital to share, Sister Ortiz told Catholic News Service.

Karen Levad, coordinator of The Ribbon Minnesota and a member of Pax Christi USA’s working group for the program, said the campaign for nuclear disarmament is as important today as it was in 1985.

“We need to continue to have that energy. In these troubled times, I find the ribbon project as a place of sanctuary where we can let go of our fears and produce something that really is hopeful and positive. I think desperately needed right now,” she told CNS.

Merritt conceived of the original peace ribbon after a visit to Hiroshima in 1982 and began thinking about the threat to human life posed by the then-massive American and Russian nuclear arsenals. During the Cold War of the 1970s and 1980s, nuclear stockpiles peaked at more than 50,000 individual weapons on planes, ships, submarines and underground missile silos poised to attack.

President Ronald Reagan and Russian leader Mikhail Gorbachev agreed to begin dismantling nuclear weapons systems through verifiable means detailed in negotiated arms treaties in the 1980s. However, all but one of the treaties have expired or been rendered moot as the U.S. and Russia have withdrawn from them.

Only the New Strategic Arms Reduction Treaty, or New START, remains in place between the nuclear superpowers. It capped the number of deployed strategic nuclear warheads and bombs by each country at 1,550. The pact is set to expire in February unless both countries agree to a five-year extension.

Russian President Vladimir Putin has signaled he is willing to extend the 10-year-old agreement, but President Donald Trump has declined to do so, saying he wants a new agreement and that it must include China. With about 300 long-range nuclear missiles deployed, China has said it is not interested in joining any arms control talks.

Levad also said she hopes that people can gather with their panels at observances in 2021 to mark the first and only use of atomic weapons in war. “We can continue this gentle movement and make it a year of the Ribbon.”

More information on The Ribbon 2020 is online at paxchristiusa.org/the-peace-ribbon-2020 and www.theribboninternational.org.

NEXT: Sanctuaries, shrines Catholics can ‘visit’ virtually in Europe, Mideast