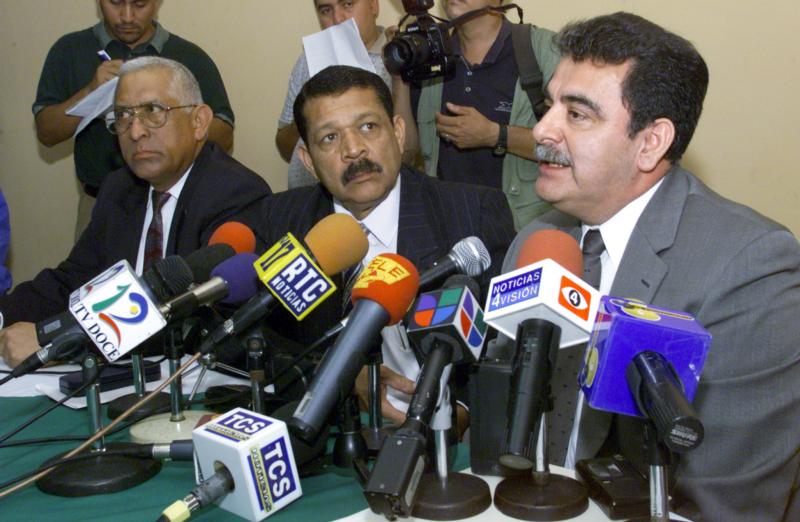 Salvadoran Gen. Rene Emilio Ponce, right, and his colleagues, Colonels Francisco Elena Fuentes, left, and Inocente Orlando Montano, center, are pictured in a 2000 photo during a news conference denying involvement in the 1989 deaths of six Jesuit priests, their housekeeper and her daughter. (CNS photo/Reuters)

MEXICO CITY (CNS) — A former Salvadoran army officer has testified that the “high command” gave orders to eliminate Jesuits priests during the country’s civil war. He also said the Central American country’s president would have known of the crimes to be committed and did not intervene.

The testimony was offered at the trial of Inocente Orlando Montano, a former colonel in the army of El Salvador, who is on trial in Spain for the murders of six Jesuits, their housekeeper and her daughter on the campus of a Catholic university.

“The entire operation was ordered by the high command,” testified Yusshy Rene Mendoza, a former lieutenant in the Salvadoran army and a cooperating witness.

Testifying July 8, Mendoza said his superior, Guillermo Benavides, a former colonel and then-director of the army academy, told troops the night before the crime that an order had come to move against Spanish Jesuit Father Ignacio Ellacuria, rector of Central American University in San Salvador.

“Benavides told me that he had to execute the order that had been received and Montano was one of the persons that gave the order to eliminate Ellacuria. He told me that several times,” Mendoza, who worked as an assistant to Benavides, told the court.

“He told us the situation of the country was critical because the guerrilla group was well positioned and, to counteract it, a decision had been made to take drastic measures because, if not, the war would be lost.”

Mendoza testified “according to Col. Benavides’ order, if there wasn’t a reversal of the order, it’s because the president had to have approved it.”

He said afterward he was giving a statement and a lawyer intervened to say that he “could not mention anyone in the high command” and only implicate Benavides and the Atlacatl Battalion, a battalion accused of carrying some of the worst atrocities of El Salvador’s civil war, which ended in 1992.

Mendoza was imprisoned after the slayings, but released after an amnesty was approved in the early 1990s. He subsequently left the country and testified from Chile, where he is a citizen.

Benavides also was imprisoned after the slayings and released with the amnesty. The amnesty was annulled by El Salvador’s top court in 2016, and Benavides returned to prison. He remains the only person convicted for the crime, though the Jesuits asked in 2017 that his sentence be suspended. A court in El Salvador denied his extradition to Spain

Mendoza testified he did not believe Benavides was the intellectual author of the Jesuits’ murder.

Montano, 76, faces charges of murder and a sentence of up to 150 years in prison if convicted. Prosecutors allege he participated in “the decision, design or execution of the killings.” He has pleaded not guilty.

The six Jesuits were pulled from their residence and murdered Nov. 16, 1989. Mendoza said soldiers did not use military weapons and simulated a firefight to cover up their actions and to try to pin blame on the guerrillas, supposedly present on the campus. He also said soldiers were told to alter their weapons afterward so ballistics could not trace them.

Father Ellacuria was a prominent figure in the peace talks to end the civil war, in which right-wing death squads and left-wing rebels fought and 75,000 lives were lost. Mendoza testified that the perception in the military was that Father Ellacuria supported the guerrilla cause.

Mendoza said he was among the soldiers entering the campus, but did not shoot anyone nor see anyone being shot dead.

He said afterward, while he was detained, his wife sought out Montano.

Mendoza testified: “Upon seeing Montano, she said, ‘How did it occur to them to kill the Jesuits?’ Montano took her by the arm and forced her into his office. He put his feet on his desk and told her, ‘Don’t ever repeat what you just said, because we’re in times of war and something could happen to anyone, including you.'”

PREVIOUS: ‘We all must get involved’ during pandemic, say Central American bishops

NEXT: The Ribbon 2020 commemorates 75th anniversary of atomic bombings