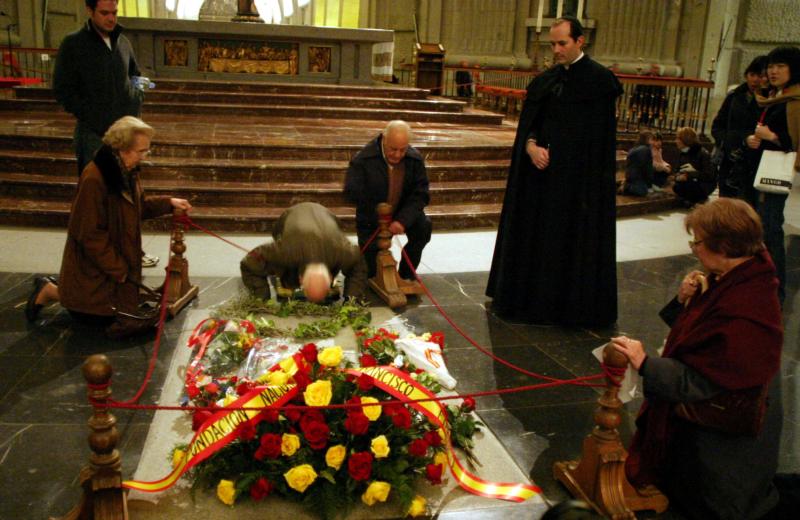 In this 2005 file photo, people pay their respects at the tomb of Spain's former dictator, Gen. Francisco Franco, in San Lorenzo de El Escorial, Spain. The Vatican released a statement July 21, 2020, distancing itself from any involvement in the Spanish government's decision to exhume Franco's remains, a divisive issue in that country. (CNS photo/Susana Vera, Reuters)

VATICAN CITY (CNS) — The Vatican distanced itself again from any involvement in the Spanish government’s decision to exhume the remains of the country’s late dictator, Gen. Francisco Franco.

The statement, released by the Vatican press office July 21, was made in response to a recent interview in which Spanish Prime Minister Pedro Sanchez suggested that Pope Francis helped him resolve the divisive issue of exhumation.

“Relations (with the church) are peaceful; Francis is a charismatic pope, I hope to meet him,” Sanchez said in the interview published July 8 in the Italian newspaper Il Corriere della Sera.

“Let me tell you something: He helped me with the issue of Franco’s remains. There was a Benedictine community in the Valley of the Fallen who opposed the exhumation. I asked the Vatican to intervene and everything was resolved,” he said.

Commenting on Sanchez’s statement, the Vatican said that “on the issue of the exhumation of Francisco Franco, the Holy See has on several occasions reiterated its respect for the legality and the decisions of the competent governmental and judicial authorities.”

The Vatican also said that on previous occasions, it “has called for dialogue between the family and the government and has never pronounced itself on the appropriateness of the exhumation or the place of burial, because it does not fall within its competence.”

Sanchez first announced plans to remove Franco’s remains from a state mausoleum at the Valley of the Fallen, near Madrid, in 2018. Besides the remains of Franco, who ruled Spain until his death in 1975, the Valley of the Fallen contains the remains of at least 34,000 people who died in the 1936-1939 civil war and includes a 500-foot-tall cross and the Basilica of Santa Cruz.

Franco’s family opposed the exhumation. However, after the family exhausted all possible appeals, the Spanish Supreme Court ruled in the government’s favor, and the remains were exhumed in October 2019.

The Vatican was forced to weigh in on the issue in July 2019 after Italian Archbishop Renzo Fratini, the former apostolic nuncio to Spain, publicly criticized the exhumation.

“It would have been better to leave him in peace. Most people and politicians think this way because 40 years have passed since his death,” Archbishop Fratini said June 30 in an interview with Spanish news agency Europa Press. “He did what he did; God will judge.”

The Vatican distanced itself from Archbishop Fratini’s statements and said that his words were “expressed in a personal capacity”; it affirmed its “respect for the sovereignty of the Spanish state and its legal system.”

PREVIOUS: Not all in same boat: Some communities ‘sink more easily,’ archbishop says