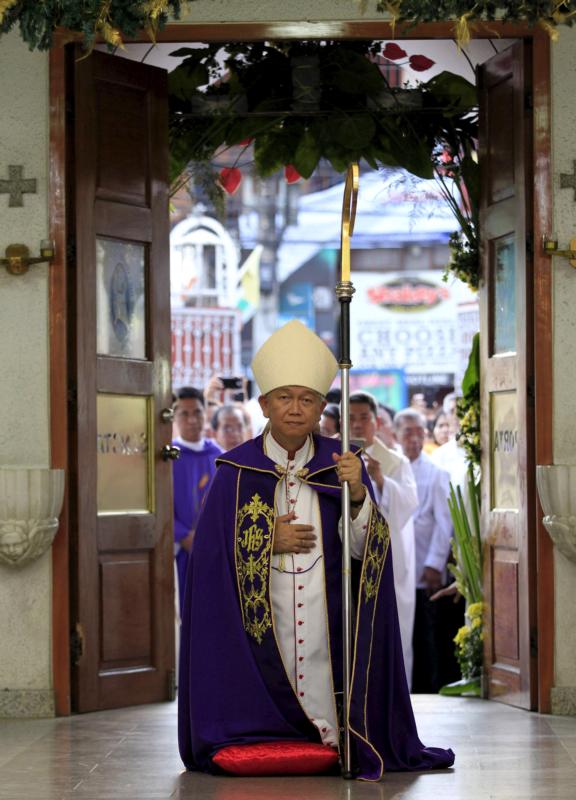 Bishop Broderick Pabillo, apostolic administrator of Manila, Philippines, is pictured in a 2015 photo. Bishop Pabillo and others in the Catholic Bishops’ Conference of the Philippines are being accused by Philippine government officials of violating the country’s separation of church and state laws by issuing a pastoral letter criticizing the nation’s newly passed anti-terrorism law. (CNS photo/Romeo Ranoco, Reuters)

Church and human rights groups oppose the law due to what they say is its vague and ambiguous provisions, reported ucanews.com.

But on July 20, President Rodrigo Duterte’s legal counsel, Salvador Panelo, said the letter “appears to have violated” the Philippine constitution with regard to separation of church and state. Panelo also accused the Philippine bishops’ conference of pressuring the Supreme Court in “calling for prayers” and appealing to the conscience of the court’s members.

Bishop Pabillo, however, has said that being bishops or clergymen did not divest them of their civil and political rights to free speech, because they are still citizens of the state.

“Don’t we have the right to speak about the government’s shortcomings because we are members of the church? We are also citizens,” Bishop Pabillo said in a news conference.

He also said that if the Duterte government believed the pastoral letter violated the constitution’s article on the separation of church and state, Panelo should press charges against the bishops.

“If it really is violative, they should file a case against us. We are challenging them if our letter really violates that,” Bishop Pabillo added.

He said the Philippine bishops did not intend to influence members of the Supreme Court, but wanted to raise awareness among all Catholics of the present issues the Philippines is facing.

“We did that (pastoral letter) in order to raise awareness among Filipinos. … Our call is clear in the text. It is a call to prayer,” Bishop Pabillo said.

Bishop Pablo Virgilio David, acting president of the Catholic Bishops’ Conference of the Philippines, also said July 20 that the conference had never intended to influence members of the Supreme Court or interfere with the operations of government.

“Our only influence is on conscience, because it is our duty to form consciences, and we are accountable to God for this. We draw inspiration from both the Scriptures and the magisterium of the church,” Bishop David added.

He said the bishops were exercising their right to freedom of expression, which he hoped was still respected by Philippine government authorities.

The bishops “respect the Supreme Court as the highest body within our judiciary, which is supposed to function independently of the other branches of government if we are to continue to function as a democracy,” Bishop David said.

“What we hope and pray for is that both our legislature and judiciary remain truly independent and continue to function as designed by our constitution,” he said.

NEXT: Vatican foreign minister: Religious freedom must be protected