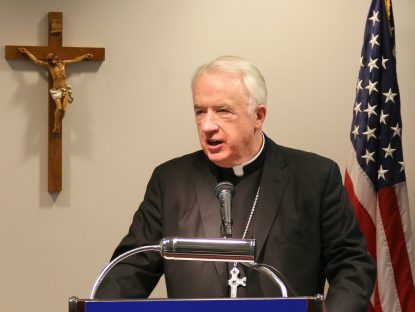 The Congregation for Bishops in Rome reached this decision on how Bishop Bransfield should fulfill Pope Francis’ requirement that he “make personal amends for some of the harm he caused” while serving in the diocese.

Bishop Mark E. Brennan, Wheeling-Charleston’s current bishop, made the announcement in a letter to the faithful Aug. 20, saying that the decision comes after extensive input from him and with consideration of governing factors in both civil and canon law.

Bishop Bransfield has now repaid the Diocese of Wheeling-Charleston the amount stipulated for “unauthorized benefits received from diocesan resources.” The diocese also has received his letter of apology, dated Aug. 15, which has been made public on its website www.dwc.org.

“I am grateful to Pope Francis and the Congregation for Bishops for accepting in large part the outline of the amends plan I presented to Bishop Bransfield in November 2019,” Bishop Brennan said in his letter to the Catholics in the diocese.

“That plan combined an insistence on restorative justice with a gesture of mercy, which is how God deals with all of us,” he added. “I hope that the people of the Diocese of Wheeling-Charleston will see in the decision of the Congregation for Bishops a fair and reasonable resolution of this unseemly matter.”

In his letter, Bishop Bransfield said he was writing “to apologize for any scandal or wonderment caused by words or actions attributed to me during my tenure” as head of the diocese. He confirmed he had repaid the diocese, but said he had been reimbursed “for certain expenditures” during his tenure that “have been called into question as excessive.” He said he had believed these reimbursements made to him “were proper.”

He also said he was profoundly sorry if by “certain words and actions I have caused certain priests and seminarians to feel sexually harassed” as has been alleged. “That was never my intent,” he said, adding he hoped the letter “will help to achieve a kind of reconciliation with the faithful of the diocese.”

Bishop Bransfield also has been urged to apologize privately to certain individuals who reported abuse and harassment. Bishop Brennan said diocesan officials are aware that some individuals have received a letter from the former bishop.

Bishop Bransfield, whose resignation was accepted by Pope Francis Sept. 13, 2018, will receive $2,250 per month as his retirement stipend, the amount recommended by the U.S. Conference of Catholic Bishops for retired bishops, Bishop Brennan said in his letter. However, no other benefits, such as for a secretary or travel, will be provided.

“This is in accord with the discretion that I have, as the current diocesan bishop, according to the same USCCB guidelines, to reduce or eliminate additional benefits for a predecessor who did not retire in good standing,” Bishop Brennan said in the letter. “Thus, Bishop Bransfield’s stipend will be about one-third of the full package of $6,200 ordinarily given to a retired bishop.”

Bishop Bransfield, whose resignation was accepted by Pope Francis, will continue to be covered by the health insurance plan for priests of the diocese, which will pay his modest long-term care insurance premium.

Bishop Brennan, who was installed to head the diocese Aug. 22, 2019, ended his letter saying that he is grateful to the faithful of the Diocese of Wheeling-Charleston for their patience during the past year.

“This has been an ordeal for all of us,” he said. “Now, I hope, we can move forward and not let the past distract us from the urgent work of faith that is so vital to the well-being of so many throughout this state who need the church’s ministry.”

“Faith in God can help us heal the wounds we have suffered,” he said, “and give us strength to move ahead with the true mission of the church: to bring Jesus Christ to the people he came to save and to work his wondrous power of renewal in them.”