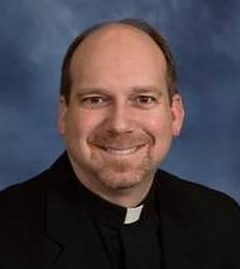 Father Michael Zacharias, pastor of St. Michael the Archangel Parish in Findlay, Ohio, is seen in this undated photo downloaded from social media. The Diocese of Toledo announced Father Zacharias was placed on administrative leave after he was arrested Aug. 18, 2020, after celebrating morning Mass at the church. He faces federal sex trafficking charges. (CNS photo/Doreen Abi Raad)

TOLEDO, Ohio (CNS) — A priest of the Diocese of Toledo is on administrative leave as he faces federal sex trafficking charges.

Father Michael Zacharias, 53, pastor of St. Michael the Archangel Parish in Findlay, about 45 miles south of Toledo, was arrested by members of the Northwest Ohio Child Exploitation and Trafficking Task Force after celebrating morning Mass Aug. 18 at the church.

Bishop Daniel E. Thomas of Toledo placed Father Zacharias on administrative leave after the charges were announced by the FBI.

“I am profoundly shocked and grieved to learn of these charges against one of our priests. The church cannot and will not tolerate an such behavior and takes any sexual abuse or misconduct on the part of a cleric with utmost seriousness,” Bishop Thomas said in a statement.

“As we await the outcome of the criminal investigation, our prayers go out to anyone affected by this situation,” the bishop added.

The diocese urged other potential victims to contact the FBI, local law enforcement authorities and the diocesan victim assistance coordinator.

The allegations of sexual abuse are the first raised against the priest, the diocese said.

Father Zacharias appeared in U.S. District Court in Toledo to hear the charges filed against him. No further court date has been set. He remains in custody.

The criminal complaint filed in federal court alleges that the priest groomed two male victims, now 32 and 26, while he was a seminarian and they were students at St. Catherine of Siena Parish in Toledo in the late 1990s.

The two victims told an FBI investigator, according to the complaint, that they later became addicted to drugs and accused the priest of supporting their addictions by repeatedly paying them to allow him to perform oral sex.

Cellphone records of the victims obtained by investigators detailed multiple text exchanges between the priest and the men in which the encounters were arranged, the complaint said.

Father Zacharias was ordained in 2002 and has served in Toledo diocesan parishes in Mansfield, Van Wert and Fremont before being assigned to the church in Findlay in 2017.

The Survivors Network of Those Abused by Priests called the allegations that Father Zacharias abused minors before his ordination “disturbing.” The organization said in a statement that it was concerned that there may be other victims in the communities in which the priest was assigned.

“We call on Bishop Daniel Thomas to personally visit each and every parish where Father Zacharias worked, detailing the charges against him and encouraging others who may been hurt by him or witnessed his misdeeds to make a report to both the FBI and local law enforcement,” the statement said.