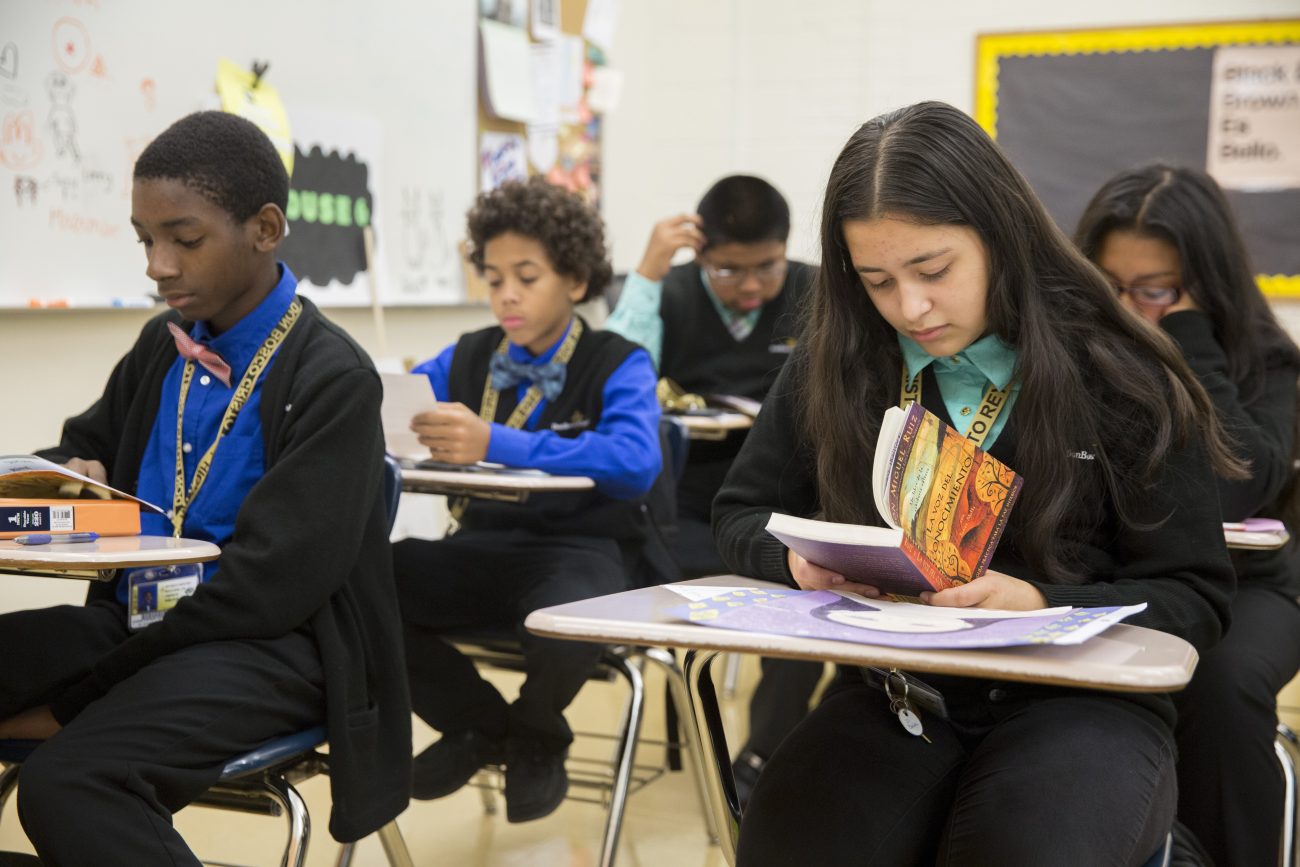 In a 2016 file photo, students at Don Bosco Cristo Rey High School in Takoma Park, Md., participate in a classroom exercise. As the Archdiocese of Washington worked on a school reopening plan, it was reviewing a Montgomery County, Md., directive ordering the closure of Catholic and other nonpublic schools' in-person learning through at least Oct. 1, 2020. (CNS photo/Jaclyn Lippelmann, Catholic Standard)

WASHINGTON (CNS) — The Archdiocese of Washington’s Catholic Schools Office hailed an Aug. 7 announcement by a Montgomery County health officer that he has rescinded his previous directives forbidding private and religious schools from opening to in-person instruction at the start of the school year.

The Catholic Schools Office called it a reaffirmation of “the autonomy of parochial schools and non-public schools to make their own re-opening decisions.”

“I am grateful that the county recognized the autonomy of nonpublic schools to make local decisions on reopening in a safe and appropriate manner,” Kelly Branaman, then interim superintendent of schools for the Archdiocese of Washington, said in a statement after the directive was rescinded.

“As we have done throughout this entire process, we will continue to work with our schools to make the decisions that work best for each of our individual school communities,” she added. (On Aug. 12, Branaman was appointed the new secretary for Catholic schools and superintendent of schools, effective Aug. 17.)

While emphasizing that “I continue to strongly believe that based on the current state of surveillance and epidemiological data, it is neither safe nor in the interest of public health for any school to return for in-person learning this fall,” Montgomery County Health Officer Dr. Travis Gayles said that he retracted his directive “despite believing that it is necessary to close nonpublic schools for in-person instruction to protect the public.”

He also stated that “there continues to be widespread community transmission of COVID-19 and increases in the daily caseload volumes within Montgomery County, the state of Maryland as a whole, and the surrounding jurisdictions.”

The move comes after state officials — including Gov. Larry Hogan and Maryland Secretary of Health Robert Neall — became involved in working to overturn the controversial order. The Catholic Schools Office, in its statement, said it was “grateful for Maryland Gov. Hogan’s executive order and the related guidance from the Maryland Department of Health.”

On July 31, Gayles issued his first directive that private, parochial, and schools affiliated with religious institutions must remain closed to in-person instruction though at least Oct. 1. In that first directive, he stipulated that violations could be punishable by up to one year in jail, a $5,000 or both.

At that time, Washington Archbishop Wilton D. Gregory said: “The Archdiocese of Washington continues to have the health and well-being of our students, faculty, and parents uppermost in mind and heart as we make our decisions regarding the reopening of our Catholic schools. We will continue to strive to be both good citizens as well as to be faithful to our religious principles, pastoral mission and our obligations to our families.”

On Aug. 3, Hogan issued an executive order overriding Gayles’ directive. The governor said at the time that “the blanket closure mandate imposed by Montgomery County was overly broad and inconsistent with the powers intended to be delegated to the county health officer.”

On Aug. 5, Gayles responded to the governor’s action by rescinding his previous directive and issuing a new one with the same stipulations, but this time citing two Maryland codes that he said gave him the authority to make such a decision.

On Aug. 6, Neall — the state’s top health official — released a memo to every county health officer in Maryland, saying, “At this time, it is the health policy of the state of Maryland that nonpublic schools not be closed in a blanket manner.”

“It is important,” he said, “that an individualized analysis be conducted so that each nonpublic school has the same opportunity that public schools have to make reopening decisions” that are based U.S. Centers for Disease Control and Prevention (CDC) recommendations and “following the guidelines in the state’s reopening plan.”

Criticism of Gayles’ directives came not just from the Archdiocese of Washington, but from private schools across the county, the Maryland Catholic Conference and politicians. A group of parents from several Montgomery County Catholic and Jewish private schools also filed a lawsuit in federal court to have the mandate overturned.

One of the main issues with detractors of the directive was that public schools could determine for themselves when it was unsafe or impractical to deny in-person instruction, but private and religious schools were ordered not to open until at least Oct. 1, despite efforts to provide a safe and healthy learning environment.

Hogan had said in a tweet that “as long as these private and religious schools develop safe plans that follow CDC and state guidelines, they should be empowered to do what’s best for their community. This is a decision for schools and parents, not politicians.”

Maryland House of Delegates Minority Leader Nic Kipke stressed that “every public school administration in the state has been given the opportunity to make a decision on reopening, the same opportunity should be afforded to private and religious schools.”

House Minority Whip Kathy Szeliga said that “to threaten imprisonment for the act of reopening a religious schools is draconian and flies in the face of the religious freedoms this state was founded on.”

The Maryland Catholic Conference expressed “deep concern with Montgomery County summarily announcing private, parochial schools are barred from opening even though they have met health and safety standards … many of the county’s Catholic and nonpublic schools have developed detailed plans for a safe, full in-person reopening or hybrid (in-person/online) opening.”

The Archdiocese of Washington has been at working ensuring a safe reopening of Catholic schools this fall. A task force was created that spent most of the spring and summer formulating a plan for opening schools.