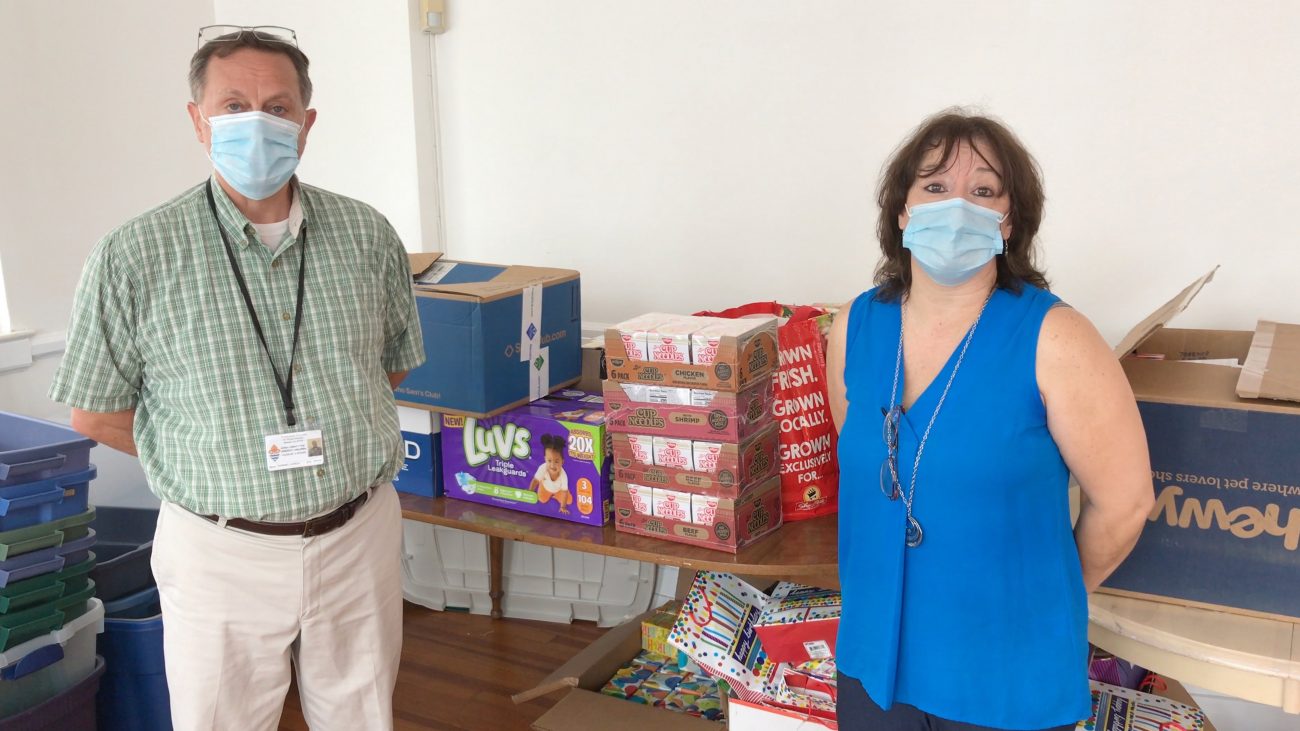 Edward Garcia and Barbara Cortes from the Scholarship Fund for Inner City Children in Newark, N.J., are seen with donations Aug. 6, 2020, during the coronavirus pandemic. (CNS photo/courtesy Archdiocese of Newark)

NEWARK, N.J. (CNS) — The demand for food and clothes has surged at the Mercy House in the Clinton Hill section of Newark where the impact of the coronavirus pandemic on the area’s poor is ever-present.

Volunteers at the Catholic resource and referral center have been giving away bags of food to the needy almost as quickly as the donations come in.

“There’s a lack of food,” said Cheryl Riley, director of Mercy House. “In the first few weeks when we reopened, we were bone dry. There was nothing.”

Riley said demand for food, clothes, and toiletries is the highest it’s ever been since the Mercy House was established in June 2018 in Newark’s South Ward in a former convent. Meanwhile, donations are down.

“We’re wiped out of all our clothes,” Riley told The Catholic Advocate, newspaper of the Archdiocese of Newark. “Everything. Bedding. We had people that were counting on us to help get small household items, and everything came to a halt.”

Like so many other organizations and businesses around the world, the Mercy House closed in March because of pandemic lockdown measures. The organization reopened in May for one day a week, on Tuesdays, with new health protocols. Until recently volunteers gave away food and clothes to the needy over a table by the front door.

“You feel bad because the whole purpose was to let people come in and give them dignity to be able to look on the racks and pick out what they want,” Riley said. “They’re not going to the mall shopping. They just basically have what we give them.”

Riley hopes to open the Mercy House for a second day every week soon and recently began letting two people in the building at a time. Masks and gloves are required.

Donations of clothes and household items are starting to come back, she said, but food is still in high demand. Unemployed and underemployed residents are adding to demand, Riley said. She also has noticed an increase in residents being evicted and seeking housing assistance.

One of the reasons there was so much demand for food is because it took some time for many area food pantries like Blessed Sacrament next door to reopen.

The Mercy House also counts on donations from Catholic schools, which are also shuttered.

“Parishes would do a diaper drive or school kids would come down and volunteer to help us, and that all stopped,” Riley said.

She is grateful to the parishes, organizations, and individuals that have made donations, and encouraged more people to get involved. People can drop off nonperishable food, toiletries, diapers, wipes and clothes on Tuesday for now.

One trend that Riley has observed during the pandemic is a heightened interest in religious items, like Bibles, rosaries, and statutes of Mary.

“I think because of COVID people really had time to be alone and focus on some spirituality,” she said. “A poor woman came in and asked me for dresses so she could go to church. All she wanted was to be able to go to church.”

Volunteers at the Mercy House encourage residents to attend Mass and baptize their babies. As a result of their efforts, five babies were baptized into the faith by Father Albert Nzeh, the pastor of Blessed Sacrament.

Riley is grateful for the volunteers at Mercy House who have been working under stressful conditions in very hot weather.

“There is something about it at the Mercy House that hooks you in,” she said. “People want to come and help down there. They want to volunteer, they want to help, they want to donate, they want to give. It’s a feel-good thing. You’re helping people. Just think about not having anything. That’s what it is. The need is tremendous.”

Agnish writes for The Catholic Advocate, newspaper of the Archdiocese of Newark.

NEXT: Letter: Democrats must make room for pro-lifers