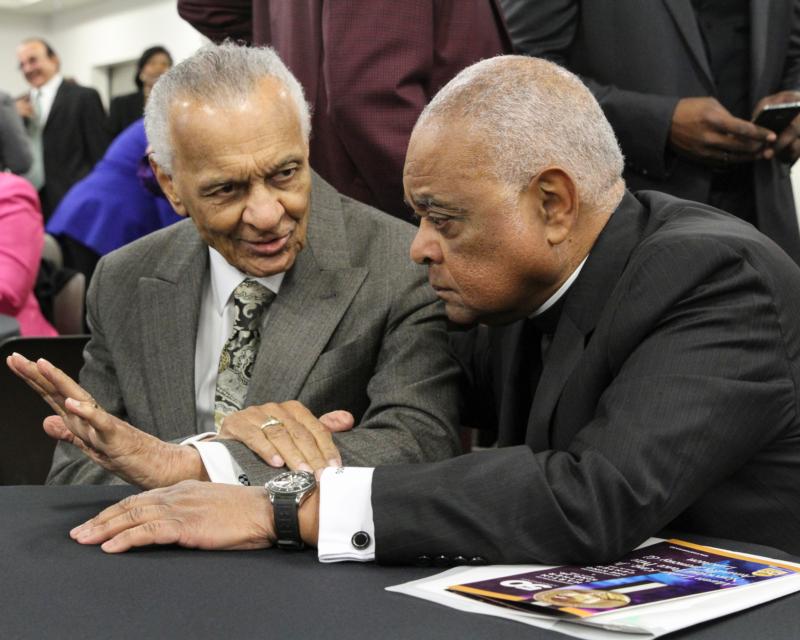 WASHINGTON (CNS) — In a class within an anti-racism course at the University of Notre Dame, Washington Archbishop Wilton D. Gregory spoke in a teleconference call to students, faculty and alumni about the moral imperative of opposing racism.

“The enduring bequest of slavery in the United States still leaves a misery that is not so easily dismissed,” Archbishop Gregory said. “That legacy needs reconciliation and the Catholic Church must exercise its mission as the repository of reconciliation given to it by the Lord Jesus himself.”

The class, which took place over Zoom Aug. 21 through Notre Dame’s Klau Center for Civil and Human Rights, began with an address from the archbishop and allowed time for students to ask questions.

Archbishop Gregory noted how bishops in the United States have issued several pastoral statements on the topic of racism and racial intolerance.

“Over the years, these statements have grown increasingly direct and forceful,” he said. “They have also revealed that changing focus from charity toward people to a serious realization of the personal and universal consequence that slavery has left on this nation and all others as well who were participants in the business of slavery.”

In the 19th century, the archbishop said, American Catholic bishops did not take a formal position condemning slavery, “fearing perhaps that such would result in dividing Catholic people along the extraordinarily complex matters that would eventually result in a four-year Civil War dividing the nation into warring camps.”

“Who will ever know the number of African American Catholics we might have had if the Catholic Church had publicly and prominently and enthusiastically jointly chosen to be identified with the anti-slavery movement,” Archbishop Gregory said.

When the civil rights movement began nearly a century later, Archbishop Gregory said the American bishops issued a document “disavowing segregation but urging prudence to bring about the end of segregation.” However, as things began to progress to 1968, the archbishop continued, civil unrest and threats of violence began to grow, moving the bishops to “speak with persistence and a passion that was new and greatly needed.”

“As we remain still on the threshold of a new millennium of Christianity, we stand at a hopeful juncture where the church can fulfill the nobility of its mission and live out the dignity of a documented history,” Archbishop Gregory said. “Those in leadership of tomorrow’s church will be judged by a much higher standard, one that is rooted in the Gospel and the Catholic Church’s ability and obligation to reconcile and heal the sins of humanity as well as those that may still lodge in the heart of the church herself.”

When asked how people might reclaim the moral dimension surrounding action against racism, Archbishop Gregory emphasized each individual’s heart and actions.

“I’d like to focus the question of the morality on the individual, that is, ‘Where is my heart?'” Archbishop Gregory said. “Taking down statues may be an important gesture, movement, long overdue in many situations, but asking the more important question of the individual is, ‘What is my attitude? How do I need conversion?’ I can take down a statue of Robert E. Lee or some of the other Confederate heroes, but if I don’t move my heart, all I’ve done is to take down a granite statue, but the hardness of heart that is mine is still there.”

Archbishop Gregory also called for an expansion of the pro-life movement to emphasize that “every life is sacred at every moment.”

“To be truly pro-life, we have to say that after the child is born, we have to work for the environment where that child’s life, under all circumstances, is honored and respected,” Archbishop Gregory said.

In closing, the archbishop recommended some books and media for the students to continue educating themselves about anti-racism efforts. He recommended a speech given to United States bishops in 1989 by Sister Thea Bowman, the first African American member of the Franciscan Sisters of Perpetual Adoration, and the book “History of Black Catholics in the United States” by Benedictine Father Cyprian Davis, as well as select articles on the Black Catholic experience published in the journal U.S. Catholic Historian.