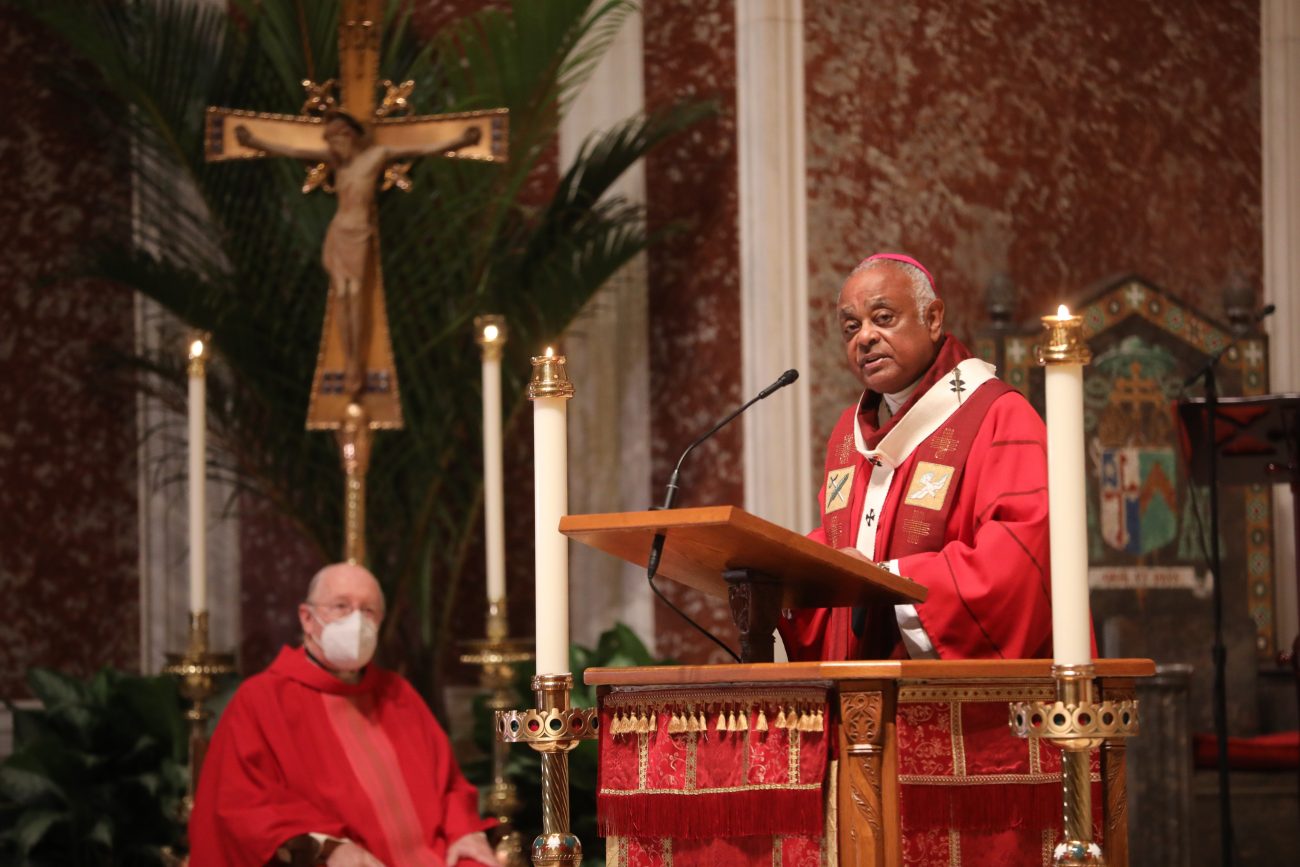 Washington Archbishop Wilton D. Gregory preaches his homily during an Aug. 28, 2020, Mass of Peace and Justice at the Cathedral of St. Matthew the Apostle, marking the 57th anniversary of the 1963 March on Washington for Jobs and Freedom. (CNS photo/Andrew Biraj, Catholic Standard)

WASHINGTON (CNS) — Celebrating an Aug. 28 Mass to mark the 57th anniversary of the Rev. Martin Luther King’s historic March on Washington, Archbishop Wilton D. Gregory urged Catholics to continue the dream of the late civil rights leader and to work for reconciliation and unity building.

“Ours is the task and the privilege of advancing the goals that were so eloquently expressed 57 years ago by such distinguished voices on that day,” Archbishop Gregory said. “Men and women, young and old, people of every racial and ethnic background are needed in this effort.”

The Mass of Peace and Justice was celebrated at the Cathedral of St. Matthew the Apostle in Washington in honor of the 1963 March on Washington. It was organized by the Archdiocese of Washington’s Office of Cultural Diversity and Outreach and the archdiocesan Secretariat for Pastoral Ministry and Social Concerns.

Washington Auxiliary Bishops Mario E. Dorsonville, Roy E. Campbell Jr., and Michael W. Fisher concelebrated the Mass, which was livestreamed on various social media platforms. Because of COVID-19 restrictions, seating was limited at the cathedral, but Archbishop Gregory said, “the intensity of our prayer is not diminished in the least.”

“We are at a pivotal juncture in our country’s struggle for racial justice and national harmony,” he said. “Believers and nonbelievers, sports stars and corporate giants, small town residents and urban dwellers must all engage in the work of reconciliation and unity building so that our common future will be better and more secure than the past.”

To that end, Archbishop Gregory announced during the Mass an archdiocesan initiative to “fight against racial injustice everywhere.” The initiative was outlined on a scroll presented to the archbishop by archdiocesan Catholics. including Betty Wright, a parishioner at St. Martin of Tours Parish in Washington, who participated in the 1963 March on Washington.

The initiative will include a wide range of pastoral activities and outreach, including prayer, listening sessions, faith formation opportunities and social justice work.

Archbishop Gregory called the historic March on Washington “a moral and religious event.” He also noted that he was celebrating the Mass in the cathedral where then-Archbishop Patrick O’Boyle had invited people to pray before the march. Archbishop O’Boyle also delivered an opening prayer on the steps of the Lincoln Memorial that day.

Calling that march “a deeply faith-inspired event,” Archbishop Gregory said, “it was less about achieving something than about becoming something — becoming a single family of justice, unity and harmony.”

“Surely those goals are noble and more than desirable even today — perhaps especially today,” the archbishop said. “Death has silenced most of the great voices of Aug. 28, 1963 — Dr. King, John Lewis, A. Philip Randolph, Mahalia Jackson and Marian Anderson to mention only a few — nevertheless the intensity, determination and the energy of their spoken and sung words echo still today.”

“The vast majority of the oratory of the day highlighted social and civil concerns but always with an undeniable touch of religious faith,” Archbishop Gregory said. “People from a wide variety of religious traditions were united in a prayerful moment for our nation. The existing social order was clearly challenged by people of faith. That is exactly what we need today.”

“The spirit that they shared on that remarkable day was unmistakably sacred,” Archbishop Gregory said. “With that spirit they were ready to change the world. It gave them a clear vision of what our nation was called to be — what we must become, as it was described so eloquently in the words of Dr. Martin Luther King Jr.”

Noting that the Gospel reading for the Mass was taken from St. Matthew’s account of the Sermon on the Mount, Archbishop Gregory said the beatitudes “fit the commemorative observance perfectly as they highlight the virtues and the spiritual vision that are necessary for society’s renewal.”

The beatitudes, he said, “all point to a society of harmony and justice which were the desired end of that march 57 years ago.”

“Dr. King spoke movingly about what our nation was destined to and must become — he no doubt must have reflected often on the beatitudes,” Archbishop Gregory said.

The archbishop has had a long association with the late civil rights leader.

He previously served as archbishop of Atlanta, Rev. King’s birthplace. He has preached in Atlanta’s Ebenezer Baptist Church, where both Rev. King and his father preached and, in 2006, he was inducted into the Martin Luther King Board of Preachers at Morehouse College in Atlanta.

He noted that the Mass was being celebrated during the COVID-19 pandemic and at a time of nationwide protests for racial justice following highly publicized police shootings of unarmed Black men and women.

He urged the faithful not to become discouraged in their fight to end racism. “We must take heart and not be dissuaded or intimidated by the voices that seek division and hatred because ‘We shall overcome,'” the archbishop said as he concluded his homily, quoting a gospel song that became an anthem for the civil rights movement.

After the Mass, he spoke with and blessed some young adults who had participated in the march earlier that day.