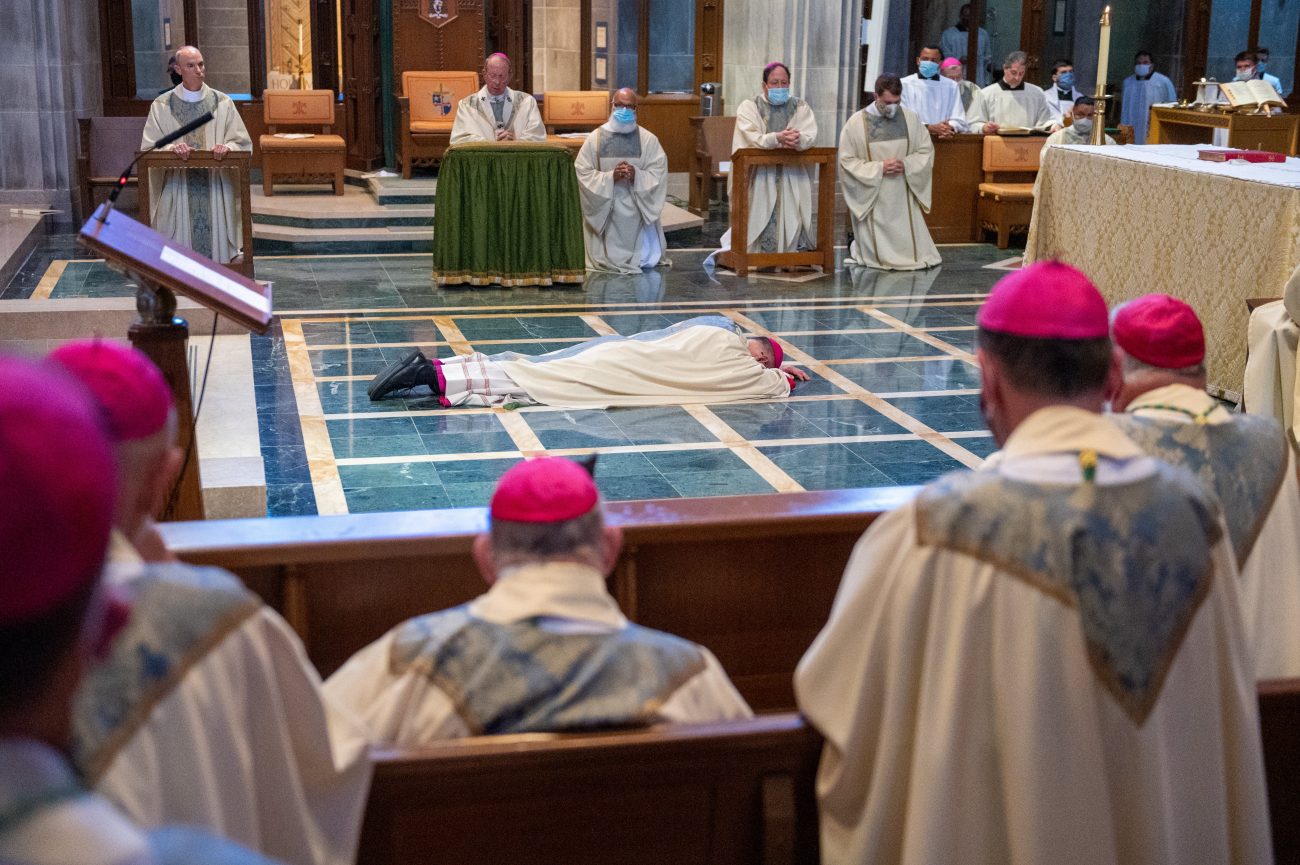 Bishop Bruce A. Lewandowski lies prostrate on the floor in the sanctuary of the Cathedral of Mary Our Queen in Baltimore during his episcopal ordination as a Baltimore auxiliary Aug. 18, 2020. (CNS photo/Kevin J. Parks, Catholic Review)

BALTIMORE (CNS) — The lives and spirituality of the Redemptorists were woven into the ordination Mass of Baltimore’s new auxiliary, Bishop Bruce A. Lewandowski, a member of the international religious order whose founder told his confreres they should resist honors and any higher episcopal roles.

Archbishop William E. Lori of Baltimore referred to St. Alphonsus Liguori, the Redemptorists’ founder, who was surprised and distressed when Pope Clement XIII named him a bishop in 1762.

“I know that you shared St. Alphonsus’ surprise and hesitancy on being named by Pope Francis as auxiliary bishop of Baltimore,” the archbishop said in his homily just before he laid hands on and ordained Bishop Lewandowski.

“I, however, had no hesitancy in recommending you to Pope Francis,” the archbishop said, “for I have seen firsthand that you are a true son of St. Alphonsus Liguori in your missionary zeal and your practical pastoral love for those you serve.”

In the Mass Aug. 18 at the Cathedral of Mary Our Queen, the archbishop also recalled St. John Neumann, another Redemptorist, who was ordained to the episcopate a few miles south of the cathedral at St. Alphonsus Church in Baltimore.

After the ordination rite, Archbishop Lori led the new bishop to a chair in the sanctuary that had been used for Bishop Neumann’s ordination in 1852 when he became bishop of Philadelphia.

The archbishop focused on the threefold role of a bishop to teach, sanctify and shepherd, “a ministry you will share with me and my brother bishops and priests and indeed the whole local church.” 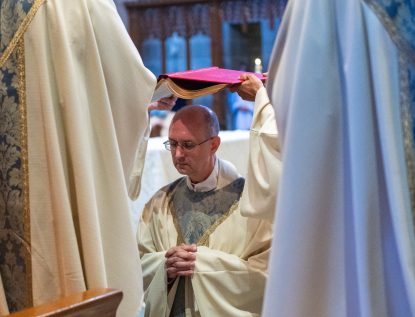 The Book of the Gospels is held over the head of Bishop Bruce A. Lewandowski during his episcopal ordination as a Baltimore auxiliary at the Cathedral of Mary Our Queen Aug. 18, 2020. (CNS photo/Kevin J. Parks, Catholic Review)

“Like St. Alphonsus or St. John Neumann, whose mission fields constantly expanded, you will bring the Gospel not only to the spiritual family of your parishes, but indeed to the highways and byways of the Archdiocese of Baltimore and beyond,” Archbishop Lori said.

“Your preaching will be addressed to everyone without exception, but will resonate in a special way among immigrants struggling to make their way, among those who mourn over their separation from family members and loved ones, among those in economic distress and those who are especially susceptible to illness, among those who are victims of xenophobia and racism,” he said.

“As a Redemptorist, you will awaken in us a newfound love of Jesus, our Redeemer, and call us to a way of life that befits anyone who would be a true missionary disciple,” he added.

Archbishop Lori said a bishop’s responsibility for sanctifying is closely tied to the Eucharist, devotion to which St. John Neumann promoted. He said that as bishop of Philadelphia, the future saint “was described as ‘a human dynamo’ — a description that many would say applies to you, Bishop Bruce, as much as to him.”

As shepherds, both St. Alphonsus and St. John Neumann brought the mind and heart of Christ to new believers and drawing people back to the faith and had a special love for the poor.

“It is this kind of shepherding, Bishop Bruce, which is so necessary in our times,” the archbishop said. “That is why Pope Francis urges bishops and priests not to remain in our comfort zone but also to be on the move, encountering and accompanying the people we serve, uniting them to the Lord’s one flock and leading them to the church’s eucharistic heart.”

The archbishop encouraged Bishop Lewandowski to entrust his ministry to Mary under her title of Our Lady of Perpetual Help, an icon of which was entrusted to the Redemptorists in 1866 by Pope Pius IX, who encouraged the order to make her known throughout the world.

An icon of Our Lady of Perpetual Help was present for the Mass in front of the ambo from which the Scripture was proclaimed.

The choir sang an invocation of the Holy Spirit to begin the rite of ordination.

The bishop-designate then stood before Archbishop Lori to promise his faithfulness and his resolution to uphold the faith.

He then lay prostrate on the floor of the sanctuary as the choir sang a litany of supplication.

The archbishop and the co-consecrators — Auxiliary Bishop Adam J. Parker of Baltimore, and Auxiliary Bishop John J. McIntyre of Philadelphia — each laid their hands upon Bishop Lewandowski’s head. They then prayed the solemn prayer of consecration as two deacons held open the Book of the Gospels over his head.

The archbishop anointed Bishop Lewandowski’s head with sacred chrism to signify the final outpouring of the Holy Spirit during the ordination rite.

The bishop then received the Book of the Gospels and the other insignia of his office — a ring, a crosier and a miter.

The archbishop and the dozen bishops present — including Cardinal Joseph W. Tobin of Newark, New Jersey, who also is a Redemptorist — then greeted the new bishop with a hug, each one wearing a face mask.

The Mass included elements in English, Spanish and Portuguese, to represent the bishop’s facility in language and ministry.

About 30 members of the bishop’s family came from Ohio and elsewhere for the Mass, including his older sister, Felician Sister Mary Francis Lewandowski, who gave the second reading. His parents and his brother and sister also attended.

Due to coronavirus restrictions, attendance was limited to invited guests only, numbering about 200 people, in a cathedral that would normally have been filled with 1,400 people. All wore face masks, and pews were blocked throughout the church to provide appropriate social distance.

The Mass was livestreamed on various platforms in English and Spanish so that those who could not attend in person could participate.

After Communion, Bishop Lewandowski took up his crosier, a simple, gold pastoral staff that was a gift from the Redemptorists’ Baltimore province of which he is a member.

Wearing his miter and carrying the staff, he processed through the aisles of the cathedral giving his first blessings as a bishop.

After the blessings, he began his remarks in Portuguese and also spoke in English and Spanish.

Referring to the vestments of a bishop, he said he stood there in old clothes, old not in years but in centuries, but underneath was a Redemptorist habit “of one who’s more comfortable with poor people than anyone else, the collar of a priest who loves the Eucharist and the sacramental life of the church,” he said.

“Underneath all of this is a stubborn, strong-willed man who sometimes likes his own ideas too much,” Bishop Lewandowski said. “And a Polish heart that has a Latin beat,” and a stomach that loves Polish specialties just as much as rice and beans.

“Underneath all this is one who stands with those who suffer and who can’t stand to let anyone suffer alone and one who’s willing to make the struggles of others his own,” he said, getting emotional, as he did during his homily for vespers the night before. “Underneath all this is someone who loves Jesus and would do anything and everything to get others to love him also.

He thanked his parents, siblings, family and Redemptorist family.

“I don’t know what God will do with my life,” he said in closing. “But I give myself completely and totally to the service of God and God’s people. God, do with me what you will.”