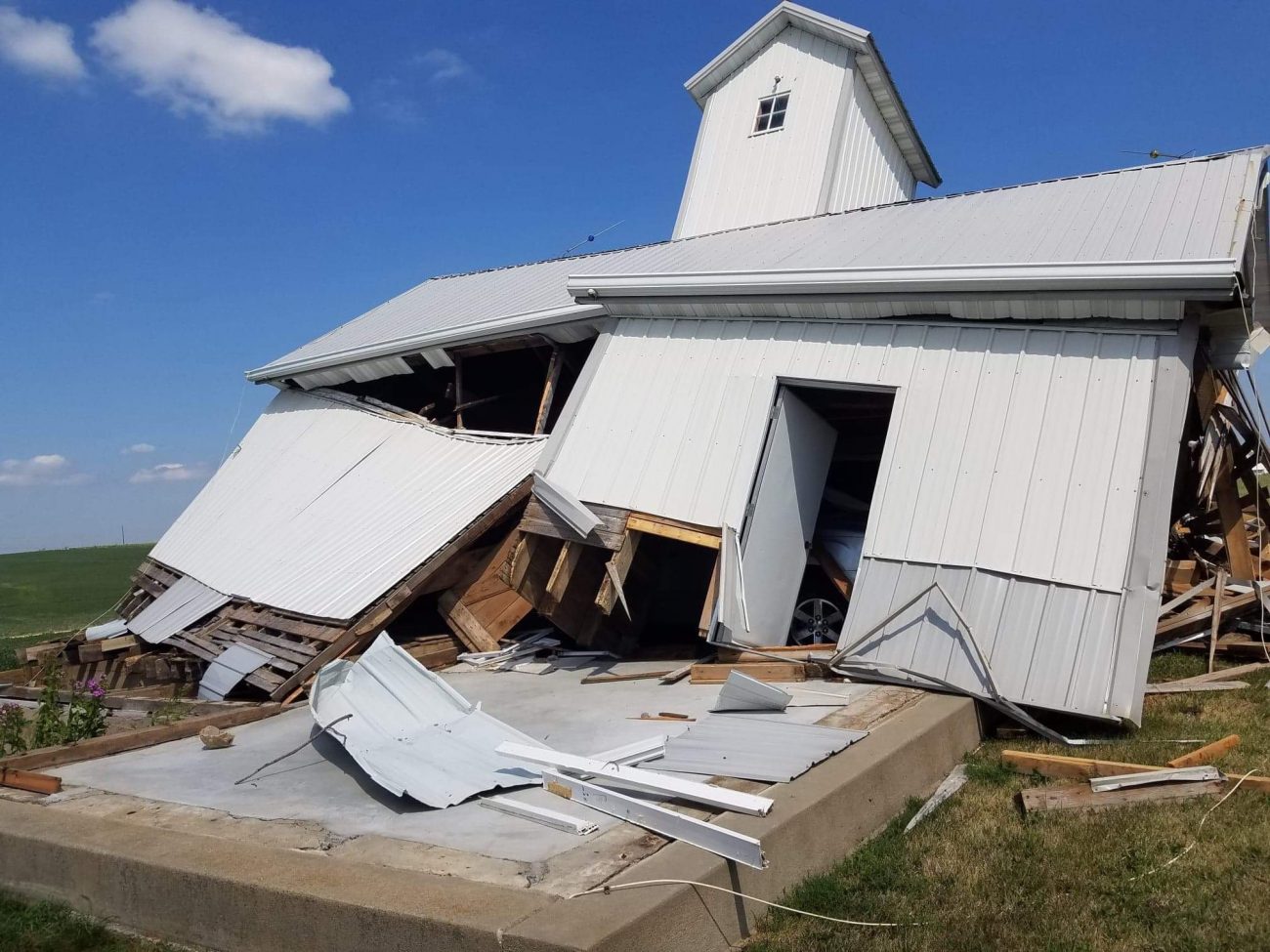 A destroyed barn belonging to Abby and Tim Clark of Ainsworth, Iowa, is seen Aug. 18, 2020. A derecho windstorm barreled through the area Aug. 10 leaving about 500,000 Iowans without electricity during that time. (CNS photo/courtesy The Catholic Messenger)

DAVENPORT, Iowa (CNS) — The derecho storm that ravaged Iowa Aug. 10 caused an estimated $4 billion in damages, and Gov. Kim Reynolds requested an expedited Presidential Major Disaster Declaration for the state to assist with the recovery.

“From cities to farms, Iowans are hurting; many still have challenges with shelter, food, and power. Resilience is in our DNA, but we’re going to need a strong and timely federal response to support recovery efforts,” Reynolds said in an Aug. 16 news release.

She requested funding under the Federal Emergency Management Agency’s Individual Assistance Program for 27 counties, including nine in the Diocese of Davenport. She also requested funding under FEMA’s Public Assistance Program for repair or replacement of public infrastructure and debris removal for 16 counties, seven of which are in the Diocese of Davenport.

Reynolds said she had spoken days before to President Donald Trump and Vice President Mike Pence, who pledged the full support of the federal government.

On Aug. 17, Trump signed the disaster declaration, but an AP story said he had approved only the public assistance portion of the governor’s request for $3.99 billion.

The next day during his visit to Cedar Rapids, Iowa, Trump was pressed by Mayor Brad Hart and other local officials to provide more disaster funds, and he said, “OK, we’ll take care of it, Mayor,” according to the Des Moines Register daily newspaper.

The approved amount totals about $45 million for 16 counties, covering debris removal and repair to government buildings and utilities. But state officials said much more is needed, including an estimated $82.7 million for homes destroyed or with major damage and $3.77 billion for agriculture damage to farmland, grain bins and buildings.

Among Catholic churches in the Davenport Diocese that sustained damage was SS. Philip and James Parish in Grand Mound, which had its roof opened up by the derecho storm.

Peter Whitman, the parish’s building committee chair, said the rubber on the church’s roof peeled back and popped up. Water entered the exposed area, soaking through the foam insulation and down into the church. Ceiling tiles fell, the carpet was soaked and some lights were damaged. A window also was broken.

“The wood in the ceiling is saturated,” he said.

During a phone interview Aug. 14, Whitman said the church still had no power. “A group of guys got a generator and we got the air conditioning on,” he told The Catholic Messenger, newspaper of the Diocese of Davenport.

When they hooked up the generator, he said, the temperature in the church was 81 degrees with 100% humidity. “It was pretty soupy in there.” Someone turns off the generator at night and turns it back on in the morning.

Large floor fans helped to move the air around and assist with drying things out. “We have our own tornado going on inside,” he laughed. The day after the storm, workers temporarily sealed the roof until repairs are made.

The roof of St. Mary Church in Oxford also sustained wind damage. Some clay tiles blew off and others were lifted up but did not return to the correct position. “We are so thankful it isn’t worse,” parish office staffer Kathy Brack said.

Father Ross Epping, pastor of St. Mary Parish in Grinnell, experienced the storm up close and personal inside the rectory.

Other diocesan entities reported tree damage, primarily; some had greatly diminished power after the storm.

When John Conway, a member of St. Joseph Parish in Wellman, learned where the worst of the storm occurred, he contacted the secretary of his Model A club based in Marion, Iowa. He volunteered his services to anyone in the area in need of help.

Conway has a grapple-equipped skid steer loader and chainsaws, perfect for tree removal. To date, he has assisted several families, working from Aug. 11-15 and then again on Aug. 17. He remained on call to provide additional help.

Driving back and forth to his volunteer assignments, he said, “It broke my heart to see how awful the cornfields looked. In my 50-plus years of farming, I have never seen this much damage to a corn crop in such a short time.”

“Doing good for the sake of doing good feels good,” he wrote in an Aug. 14 post on his Facebook page. “Volunteered myself and my grapple-equipped skid steer loader and chainsaws to help someone who had none of the above and literally dozens of very large trees down in their yard.” He didn’t get the job done that day, but later.

“The folks were complete strangers when I drove into their yard, but we are good friends now,” he wrote.

Monica Harter made a presentation on marital spirituality and prayer without her husband, Lynn, during a virtual marriage preparation program Aug. 15.

“My husband is in Cedar Rapids. He’s a power lineman,” Monica explained to her virtual audience of six young couples.

Lynn was working 17 hours a day, seven days a week restoring power to homes and businesses thrown into the dark by the ferocious derecho storm Aug. 10. He expected to continue that demanding schedule for another couple of weeks, she said. She asked for prayers for her husband, his co-workers, and all the people affected by the storm.

Cheryl Costello of Our Lady of the River Parish in LeClaire listed tree removers and power linemen among the people and things for which she is grateful in her Aug. 16 Facebook post.

“I will no longer wonder why MidAmerican (Energy Co.) guys sit in their trucks,” she wrote. “I now know they’re waiting for the tree guys and don’t want to abandon the folks waiting to turn on their light(s), their presence represents a beacon of hope. I now have increased appreciation for the power pulsing through the lines to my house, respect for the force of the wind and am humbled by the weight of one tree.”

Roseanne Wisor, a member of Our Lady of the Holy Rosary Parish in Lost Nation, wasn’t able to make it to her diocesan pastoral council meeting Aug. 15, sending this email as explanation:

“We are still helping folks with their cleanup, especially family in rural Cedar Rapids with no power. Please keep all these folks in your prayers. It’s hard to believe until you actually see it. I live in Lowden and most are still waiting for power, etc. I have never experienced such kindness toward neighbors. We didn’t get much damage but everyone is helping out. This is a good example of living the Gospel.”

Later, she told The Catholic Messenger that she had just returned from her sister’s home in Van Horne where Wisor and other helpers cleaned up downed trees.

“Again, that was living the Gospel,” she said. “Here in Lowden I was so touched by the folks sharing generators so all wasn’t lost and they could experience the joy of a warm shower or food in their refrigerators. We don’t realize how blessed we are until we are without the small things.”

Arland-Fye is editor and Amacher is assistant editor and a reporter at The Catholic Messenger, newspaper of the Diocese of Davenport. Staff reporter Lindsay Steele contributed to this story.

PREVIOUS: Foundation prize is ‘validation’ of all Homeboy Industries does, says priest

NEXT: Redemptorist priest with Phila. ties ordained bishop in Baltimore