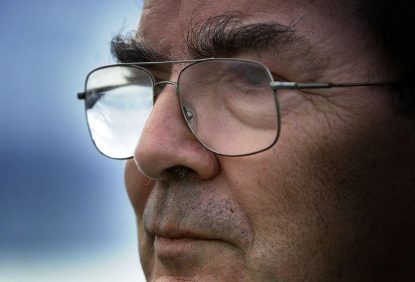 DUBLIN (CNS) — Archbishop Eamon Martin of Armagh, Northern Ireland, has hailed political leader John Hume as a “paragon of peace” for his key role in bringing an end to the conflict in Northern Ireland.

As a young man Hume trained for the priesthood, before becoming a community activist and later a politician highlighting the plight of the Catholic community in Northern Ireland in the 1960s and 1970s, when discrimination in employment and housing was rife.

Saddened to learn of Hume’s death, Pope Francis sent “the assurance of his prayers to his family and to all who mourn his loss,” said the message, written on behalf of the pope by Cardinal Pietro Parolin, Vatican secretary of state.

“Mindful of the Christian faith that inspired John Hume’s untiring efforts to promote dialogue, reconciliation and peace among the people of Northern Ireland, His Holiness commends his noble soul to the loving mercy of almighty God,” the cardinal wrote.

Archbishop Martin — who, like Hume, was born in Londonderry, Northern Ireland, said, “A great sadness has descended on my home city of Derry today as we learn of the death of one of our greatest sons, Mr. John Hume.

“That sadness ripples out to every corner of Ireland and all around the world, where the mere mention of the name of John Hume evokes admiration, respect and thanksgiving for a life dedicated to peace and social justice.

“Today we are remembering a paragon of peace, a giant of a statesman whose legacy of unstinting service to the common good is internationally acclaimed, even though it is still perhaps only unfolding,” the archbishop said.

Hume is credited with convincing the Provisional IRA to declare a cease-fire in their conflict with the British in 1994 and with being the key architect of the Good Friday peace agreement four years later.

Archbishop Martin said that “as a priest working in Derry, I came to know John as a man whose convictions were rooted in a deep faith, in prayer and practical Christianity.”

Hume’s commitment to peace building was recognized in 1998 when he received the Nobel Peace Prize along with David Trimble, then the most influential politician in the Protestant community in Northern Ireland. In 2012, Pope Benedict XVI conferred Hume with papal knighthood.

Archbishop Martin said this honor was “in recognition of his commitment to peace, reconciliation, nonviolence and social justice.”

“John put Catholic social teaching into practice — sometimes at great personal cost and risk — working ceaselessly for a process of reconciliation through which the dignity of every human person is recognized and upheld,” he said.

Bishop Donal McKeown of Derry described Hume as “one of the greatest peacemakers and champions of social justice of our time.”

“He dedicated his life to the welfare of this community, at no small cost to himself. His name became a byword for dedication to the cause of peace, whatever the obstacles or criticisms,” Bishop McKeown said.

Bishop Noel Treanor of Down and Connor also praised Hume.

“Motivated by a strong personal faith and responding to the needs of the community, John was a champion of human rights,” said Bishop Treanor.

“John Hume uniquely shaped a new and prophetic political narrative which enabled the decommissioning and disarmament of weapons and generated an infrastructure for a peace process that led to the Good Friday Agreement, and the foundations of a new politics that is his lasting legacy,” Bishop Treanor said.

Irish President Michael Higgins said, “All of those who sought and worked for peace on our island of Ireland, and in the hearts of all, will have been deeply saddened by the passing of
John Hume, Nobel Peace laureate and statesman.

“Whatever the loss to all on this island, to his family his loss is greatest. To his wife Pat, his children, and all those who loved him, Sabina and I send our deepest sympathy,” Higgins said in a statement.

British Prime Minister Boris Johnson said Hume “stood proudly in the tradition that was totally opposed to violence and committed to pursuing his objectives by exclusively peaceful and democratic means.”

“With his passing we have lost a great man who did so much to help bring an end to the Troubles and build a better future for all,” Johnson said.

Hume was buried Aug. 5 after a Mass in St. Eugene Cathedral in Londonderry. Due to COVID-19 restrictions, members of the public were not permitted to attend, but the funeral was broadcast live by the national broadcaster RTE.

Archbishop Martin and Bishop McKeown presided over the funeral Mass, according to Vatican News Aug. 6.

In his opening remarks, Bishop McKeown said Hume’s vocation in life “was to be a peacemaker for the good of others. Because of his past we can face the future.”

NEXT: Lebanon’s Catholic leaders seek help; here’s where you can donate