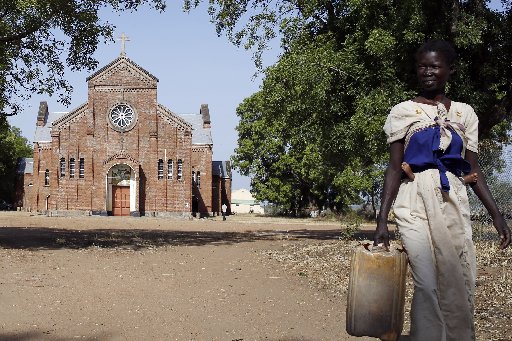 A young woman is pictured in a file photo near a church in Rajaf, South Sudan. The murder of three young girls in South Sudan's capital, Juba, has generated response from Catholic leaders and united the entire country. (CNS photo/Matthieu Alexandre, Caritas Internationalis)

NAIROBI, Kenya (CNS) — The Catholic archbishop of Juba condemned “in the strongest terms possible” the murder of three young girls, killed while watching television in their Juba home.

The girls — ages 9, 7 and 4 — were the children of Edward Jami Andrea, a lecturer at the Upper Nile University in the capital. The children were alone in the house Aug. 1 while their mother was at the market.

“I don’t know whether it was revenge or ritual killings, but these were innocent children who someone just decided to take their lives,” Archbishop Stephen Ameyu Mulla told Catholic News Service from Torit, where he is on a pastoral visit. “I am very shocked and saddened by the deaths.”

“What kind of monstrous cowards can sneak up on defenseless children and slaughter them in their home?” he asked, saying he joined all of South Sudan in condemning the murders.

“We, the peace-loving people of South Sudan, must stand united … in the face of those who would use violence and intimidation,” said Bishop Kussala.

Although South Sudan has experienced violence and insecurity for years, this incident has united the whole nation in condemnation.

On Aug. 3, President Salva Kiir said he was shocked and saddened by the heartless murders and demanded quick arrest of the killers.

“I offer my condolences to the parents of the children … and all South Sudanese who are grappling with the magnitude of this crime,” said Kiir. “The pain and trauma inflicted on us by the perpetrator(s) … is enormous, but we as a country will prevail.”

The girls’ deaths came as the country mourned another 23 people killed in an Anglican church in the eastern state of Jonglei. The two separate incidents underlined the persistent insecurity in the country.

Most of the dead in the early August attack on the church in Makol Cuel village were women and children. Scores of children were also abducted and more than 500 head of cattle raided.

Jonglei is the homeland of Dinka, Nuer and Murle, three herder communities that raid each other’s cattle and fight over pasture and access to the Nile River. Recently, the raids have become more militarized as communities acquired military-grade weapons. Children are often abducted in the raids.

NEXT: John Hume, peacemaker in Northern Ireland, dies at 83