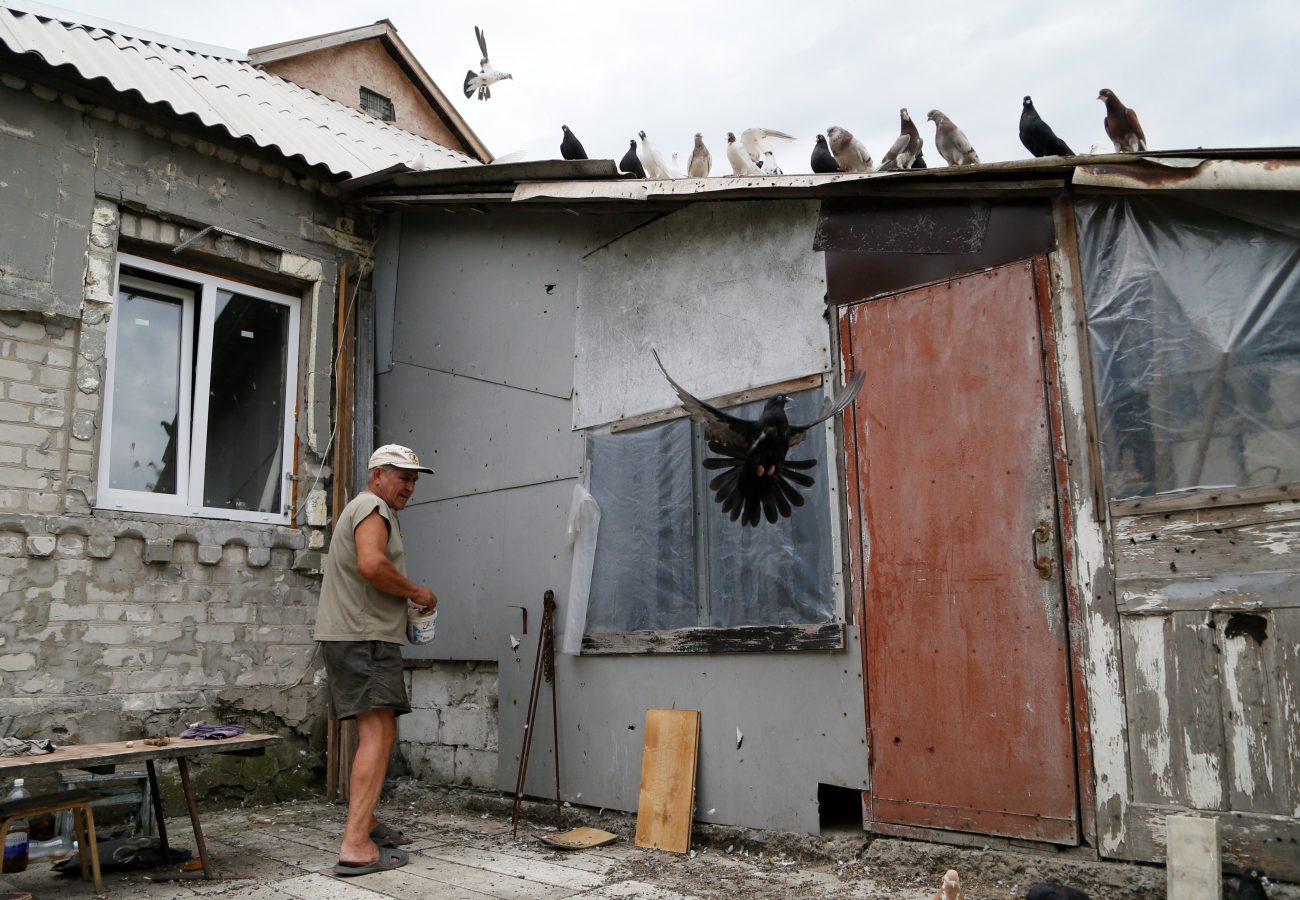 Local resident Nikolay Shuliga, 63, feeds pigeons outside his home in late July in the village of Vesele, Ukraine. The home was damaged during a conflict between militants of the self-proclaimed Donetsk People's Republic and the Ukrainian armed forces. (CNS photo/Alexander Ermochenko, Reuters)

“We thought we’d overcome war in Europe, but a whole growing generation here now knows only war — teenagers who look like teenagers everywhere, but will tell you how they routinely hide in cellars to escape gunfire,” said Andrij Waskowycz, president of Caritas in Ukraine.

He said with multiple world crises, officials of the Catholic charitable agency did not expect attention to stay focused on Ukraine, “but it’s crucial European countries, institutions and churches continue showing solidarity with the Ukrainian people in its suffering.”

However, he added that supplies had been disrupted by the COVID-19 pandemic, and drinking water was also running short because of infrastructure damage.

“Eastern Ukraine now has the highest concentration of old people in a conflict zone, with all the physical and mental health consequences,” Waskowycz said. “It’s also one of the world’s most mine-contaminated areas, with land mines still being sown widely before the cease-fire. With transportation deteriorating during the coronavirus, most people see little hope of change.”

“Caritas is trying to deliver humanitarian aid to both sides, but this is very difficult since we cannot cross the contact line and have to rely on trucks from the United Nations and Red Cross,” he added.

The Organization for Security and Cooperation in Europe reported continuing violations of the July 27 cease-fire between Ukrainian government and rebel forces. The cease-fire had raised hopes for reviving a 2015 peace plan, which would restore Ukrainian control over separatist-held Donetsk and Luhansk in return for self-rule.

However, Waskowycz said OSCE monitors had reported 257 cease-fire violations up to Aug. 11.

More than 14,000 soldiers and civilians have died from fighting and shelling in eastern Ukraine since 2014, according to the United Nations.

In a July report, the U.N. Office for Coordinating Humanitarian Affairs confirmed basic services remained severely disrupted in eastern Ukraine, raising the number of people in need to 3.8 million, close to a tenth of the country’s population.

Father Igor Yatsiv, information director of the Ukrainian Catholic Church, told CNS Aug. 5 his church had prayed for peace throughout the war, but believed any accord “must be based on justice and reparations, not mass killing.”

A leader of Ukraine’s smaller Roman Catholic Church said the cease-fire had made a “powerful invasion” less likely, but added that Catholic parishes close to the war zone remained “practically empty.”

“We are asking God for peace, and we’ve cautious hopes it will come,” Bishop Pavlo Honcharuk of Kharkiv-Zaporizhia told CNS Aug. 5. “But experience also shows it’s unwise to count on this, since there’s simply no basis for trust.”

NEXT: Cardinal Pell tells U.S. Catholics: ‘We rely on you’