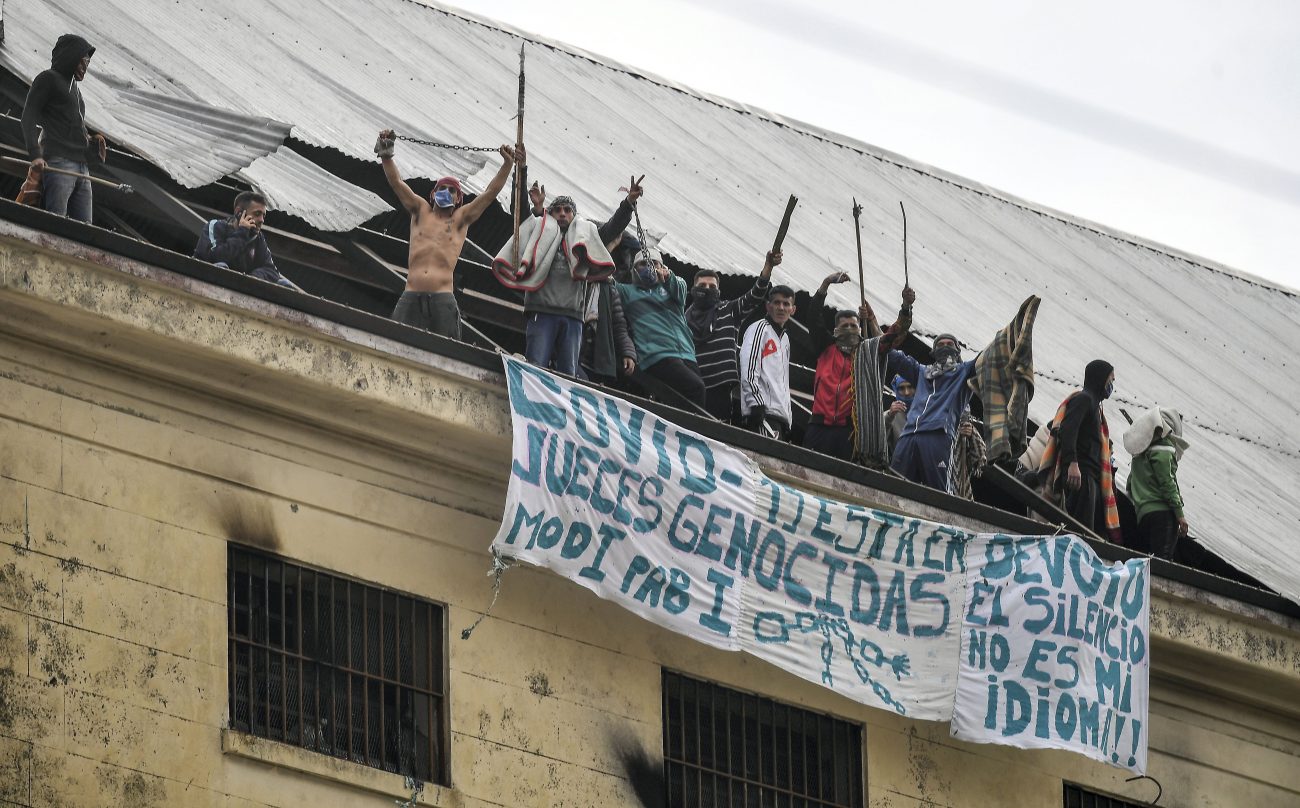 Prisoners protest in late April on the roof of the Devoto prison in Buenos Aires, Argentina, demanding action on overcrowding during the COVID-19 pandemic. (CNS photo/Victor Carreira, Latin America News Agency via Reuters)

A recent survey carried out by the Latin American Criminology Society showed that three-quarters of the region’s penitentiary systems are overcrowded.

With 115,000 prisoners and an overcrowding rate of 51 percent in Colombia, the nation’s congress approved legislation to release a large number of prisoners. But only 3,500 inmates had been sent home by mid-summer.

“That’s insignificant. There has been no real impact to reduce contagion and deaths,” said Father Wilson Castano, coordinator of the country’s prison ministry commission.

“Some penitentiary centers have an overcrowding rate of 200%. Many have infrastructure problems and a lack of water,” he added. Cases of infection have been seen in at least 25 prisons.

Inmates in several Colombian jails rioted in March, protesting overcrowding and the lack of protection from the coronavirus. At Model Prison in Bogota, 23 prisoners were killed and 90 were wounded during the disturbances.

“The stress level continues to be high,” Father Castano said; by late July 3,477 prisoners had been infected and eight died.

Since the COVID-19 pandemic began, the prison ministry commissions of bishops’ conferences throughout Latin America have been warning their governments that the virus would have a devastating impact on their overcrowded and unsanitary facilities.

“In general, Latin American prisoners are poor, migrant, black. Many of them are particularly vulnerable due to other health conditions,” like diabetes and hepatitis, Bishop Garcia Cuerva said. “It’s a critical landscape that the pandemic is somehow revealing to a greater part of society,” which seemed to have no idea what the prisoners were like.

Releasing select groups of detainees should be a natural response to the pandemic, especially considering that a large number of inmates should not be in prison in the first place, Jesuit Father Luis Arriaga, a human rights specialist and president of Iteso University in Guadalajara, Mexico, told CNS. “Statistics demonstrate that the Latin American judiciary system moves the processes with great delay. Large masses of detainees wait for years to be finally sentenced.”

It is also common that inmates who could already be approved for parole or who even served their full time remain imprisoned.

“This kind of thing doesn’t happen to the ones who have money to pay for a lawyer,” Father Arriaga added.

In Brazil, where there are at least 750,000 prisoners — half of whom have not been sentenced yet — the government’s National Council of Justice (CNJ in Portuguese) recommended in March a set of measures to prevent new incarcerations and to release a significant number of prisoners to contain contagion. But most judges only partially adopted such procedures.

“They think prisons will solve the issue of violence in the country. A judge in southern Brazil recently argued that the CNJ’s recommendation was only a recommendation, so she didn’t have to comply with it,” said Sister Petra Pfaller, a member of the Missionaries of Christ and national coordination of the prison ministry.

“I don’t know how those people are able to sleep at night,” she said.

At least 11,200 inmates have been infected and 74 have died in Brazil, but the actual number may be much higher, considering the lack of adequate testing and medical assistance, she said. “Conditions are terrible. There’s not enough water and food in many prisons, they’re overcrowded, they’re unsanitary. Reports of torture have increased.”

The CNJ said that between March and May, 35,000 prisoners were released — only 4.6% of the total prison population.

Mexico also has seen prison riots during the pandemic. “There were occurrences in Chiapas, Tabasco and Mexico states, particularly after the implementation of measures to restrict visits,” Father Arriaga said.

Families and prison ministers have been forbidden to visit detention centers for long periods. “But in most prisons, people depend on food and other products brought from the outside,” he added.

With the prohibition of taking food into prisons in Guanajuato state, for instance, starvation is hitting many inmates, the priest said.

In Honduras, the Committee for the Liberation of Political Prisoners, Territorial Defenders and Environmentalists said during an online news conference July 30 that there had been 1,055 cases of contagion and 25 deaths among the country’s inmates. It said 60% of the 22,000 detainees are still waiting for their sentences.

With the help of parishes, the prison ministry is donating food, medicine and face masks to prisoners and to their families, who have been impacted by the ensuing economic crisis, said Zobeida Mendoza, coordinator of San Pedro Sula’s prison ministry.

“Prisons are a reflection of what happens outside. Honduras has a collapsed health care system, there are no medicines. The situation will certainly get worse,” she said.

In the Dominican Republic, the National Penitentiary of La Victoria — a facility built for 2,000 inmates but housing more than 8,000 prisoners — already had 255 confirmed cases of COVID-19 by the end of April.

“La Victoria was created by dictator Rafael Trujillo in the 1950s. It’s terribly humid, inhumane, overcrowded,” Father Aristides Jimenez Richardson, national coordinator of the prison ministry commission, told CNS. The commission has been calling for La Victoria’s closure since 1989, and a new facility should replace it soon.

The number of infected inmates in the country surpassed 900 by the beginning of July. The Dominican prison ministry commission has been allowed to visit the prisons and has distributed more than 45,000 hygiene products to inmates, Father Jimenez said. “Fortunately, we received many donations from parishioners, despite their own lack of resources due to the economic crisis.”

Bishop Garcia Cuerva said the prison ministry in Argentina also has been helping the prisoners’ families obtain hygiene kits and other necessary goods and deliver them to the prisons.

“We’ve been in virtual contact with detainees — they have been allowed to keep smartphones so they could communicate with their families during the pandemic — and supported all their self-organization initiatives,” he said; in several penitentiaries, prisoners set up their own precautionary protocols and organized sanitation measures to contain the virus.

The Argentine government debated the possibility of releasing some of its 95,000 inmates, but there were strong reactions from some citizens, and only a few prisoners who were considered to be at high risk were sent home.

“The pandemic brought prisons back to the public debate. From a Catholic viewpoint, we must ensure that the prisoners have human dignity, with proper housing, food, water, hygiene and basic information from the outside,” Father Arriaga said.

NEXT: Teens hide in cellars: Official tells of conditions in eastern Ukraine