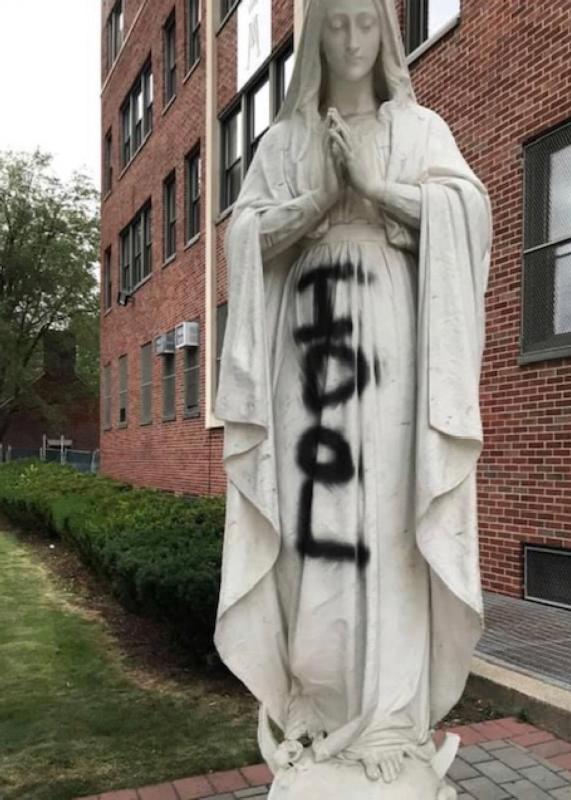 A statue of Mary defaced July 10, 2020, is seen on the grounds of Cathedral Prep School and Seminary in the Diocese of Brooklyn, N.Y. On Sept. 11, a second statue in the diocese was attacked. More than a week later police were still looking for a vandal who desecrated a statue of Our Lady of Guadalupe at Our Lady of Solace in Brooklyn’s Coney Island neighborhood. (CNS photo/courtesy Diocese of Brooklyn)

NEW HAVEN, Conn. (CNS) — The Knights of Columbus has donated $10,000 to Our Lady of Solace Church in the Diocese of Brooklyn, New York, after a vandal desecrated the parish’s beloved statue of Our Lady of Guadalupe.

A security camera captured the Sept. 11 assault on the statue at Our Lady of Solace in Brooklyn’s Coney Island neighborhood. The base of the statue was damaged along with the face, hands and veil on the figure of Mary.

The New York City Police Department is offering a reward of $2,500 for any information about the culprit.

Supreme Knight Carl Anderson directed the gift to show solidarity with the Brooklyn church after parishioners were stunned by the statue’s desecration.

“The desecration of our Catholic statues and churches is a grievous crime against all people who value religious freedom,” Anderson said in a Sept. 21 statement. “Together with Pope Francis, our bishops and faithful everywhere, we stand against violence, hatred and bigotry.”

Father Javier Flores, parish administrator at Our Lady of Solace, called the Knights’ gift overwhelming, and said the goal is to have a statue of Our Lady of Guadalupe in place by her feast day, Dec. 12.

The Tablet, Brooklyn’s diocesan newspaper, reported Sept. 18 that the statue remained mostly intact — suffering damage to the face, hands and base — after the vandal threw it on the sidewalk. “Volunteers picked the statue off the sidewalk and brought it into the church,” the paper said.

“It’s not clear if the church intends to have a new statue built or use the donations to repair the damaged statue and then put funds toward maintenance,” The Tablet story said. The church said the statue was worth $4,000; it has set up a fundraising site at and has begun to raise funds to buy a new one.

In the last few months, there has been a wave of attacks on Catholic statues around the country. A July incident also was directed at a Catholic property in Brooklyn: A statue of Mary on the grounds of Cathedral Prep School and Seminary was defaced with the word “Idol.”

Most recently, in the Diocese of El Paso, Texas, police apprehended a suspect accused of entering El Paso’s St. Patrick Cathedral Sept. 15 and destroying an almost 90-year-old statue of the Sacred Heart of Jesus.

“Whether those who committed these acts were troubled individuals crying out for help or agents of hate seeking to intimidate, the attacks are signs of a society in need of healing,” said Archbishop Thomas G. Wenski of Miami and Archbishop Paul S. Coakley of Oklahoma City in a joint statement issued late July 2.

“In those incidents where human actions are clear, the motives still are not. As we strain to understand the destruction of these holy symbols of selfless love and devotion, we pray for any who have caused it, and we remain vigilant against more of it,” they said.

Among incidents the two prelates pointed out was the beheading of a statue of Christ at a Catholic church in the Miami Archdiocese. They also highlighted two church fires, one that severely damaged the interior of a church in the Diocese of Orlando, Florida, and one that gutted a 230-year-old mission church in the Los Angeles Archdiocese.