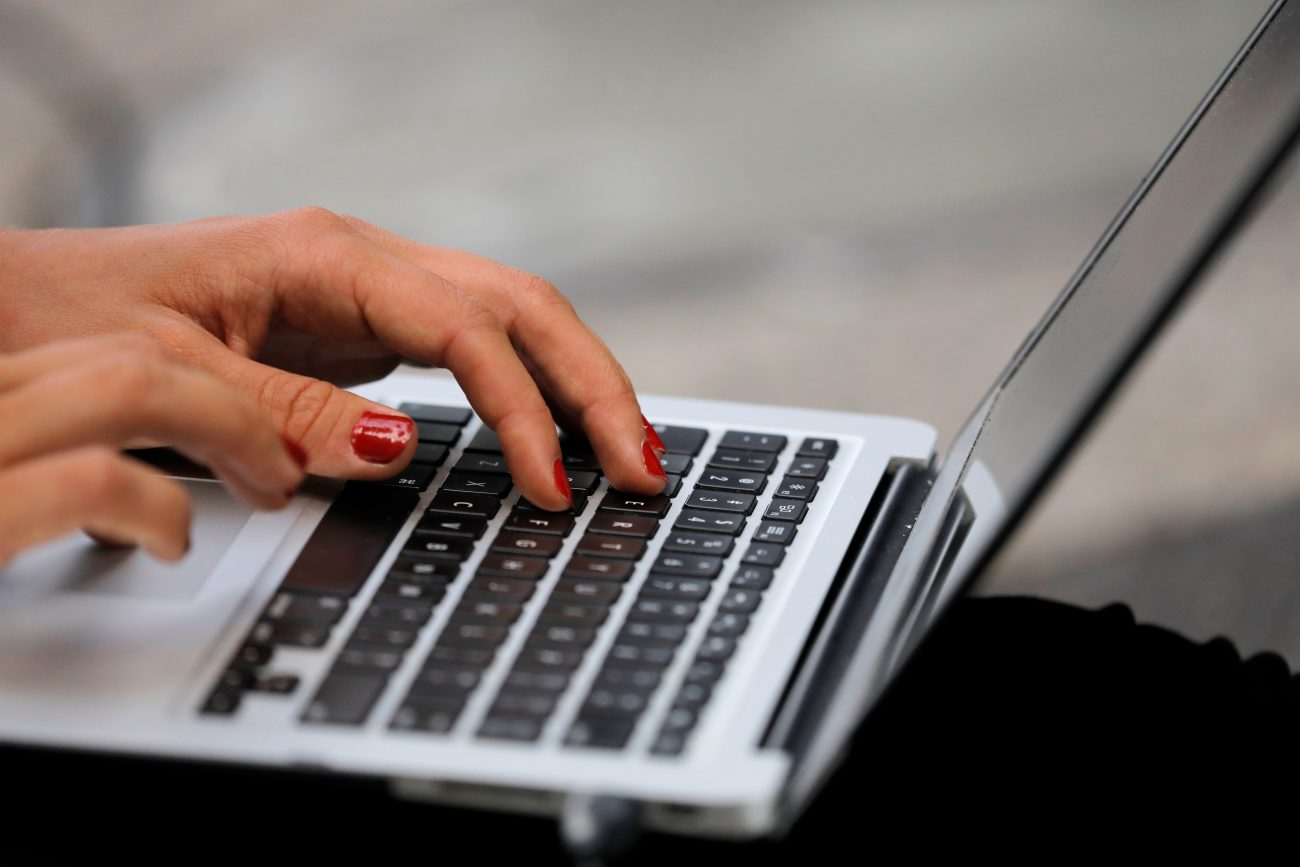 A woman uses a laptop in this illustration photo. (CNS photo/Andrew Kelly, Reuters)

ST. PAUL, Minn. (CNS) — The coronavirus pandemic has disrupted lives in many ways — from schools to workplaces, sports to socializing.

It also has impacted the Archdiocese of St. Paul and Minneapolis’ efforts to assist victim-survivors of clergy sexual abuse.

Since starting in June 2019 as the archdiocese’s outreach coordinator for restorative justice and abuse prevention, Paula Kaempffer has developed a list of healing events, presentations on restorative justice, listening sessions and other opportunities available through the Office of Ministerial Standards and Safe Environment.

And last September, she started an in-person support group to help victim-survivors of sexual abuse. It met monthly for about 90 minutes in a Twin Cities-area local library. In-person attendance had been sparse, Kaempffer said, but those who participated valued the experience.

So, when the pandemic in March drove schools to online instruction and many adults connected to work virtually, Kaempffer wondered if technology could serve support groups. She chose Zoom videoconferencing to connect participants.

By late March, she offered the first of four monthly online support groups for anyone victimized by clergy. A second group helps people who were sexually harmed by clergy as adults. A third group is for men who have suffered from clergy sexual abuse. And a fourth is for those sexually abused or harmed by clergy or others.

To spread the word about the virtual sessions, Kaempffer contacted several dioceses and the U.S. Conference of Catholic Bishops, asking them to notify victim assistance coordinators and “safe environment people,” and any victims and survivors they knew. It worked.

While an in-person group typically attracted a couple of people, the first online support group in late March brought 18. Now, an average of 12 to 14 people meet online in each group. Kaempffer said attendees from across the U.S. participate.

“The response has been wonderful,” Kaempffer said. “I think the surprise of the pandemic is that many people joining our virtual support groups find an extra layer of safety being in their own homes during a meeting.”

Some participants have asked that the online groups continue after social distancing ends.

Besides giving people an option to connect, it means being part of a larger group, Kaempffer told The Catholic Spirit, newspaper of the Archdiocese of St. Paul and Minneapolis. “They’re starting to recognize one another and get to know one another. The verbal support they give each other and the verbal affirmations they offer is just quite remarkable.”

Kaempffer said she is aware of only a few U.S. dioceses to offer these types of online groups. One is the Archdiocese of Chicago.

Tom Tharayil, director of its Office of Assistance Ministry, said Kaempffer is a leader within victim assistance programs nationwide in offering virtual support groups for victims of clergy sexual abuse. He started a virtual group in late March after hearing from victim-survivors that they were feeling isolated during the pandemic.

Tharayil sees advantages to both in-person and virtual support groups. A virtual setting opens up the possibility for victim-survivors to connect with people who are reluctant to show up in person, he said. And it’s a low level of risk to engage in a process that might help someone.

“You can be anonymous,” he said. “You don’t have to be seen. You can spend all of your time listening.”

He has heard victim assistance coordinators say it can be difficult to have many victim-survivors show up in person. But a virtual group can bring people together from small towns to large cities across the country.

Two local victim-survivors of clergy sexual abuse said the Zoom meetings conducted in the Archdiocese of St. Paul and Minneapolis are convenient and a respectful, safe environment for sharing. Participants email Kaempffer to register ahead of time. Then she emails them a link to the Zoom session for which they registered.

Paul, 62, from Minneapolis, who asked that his last name not be used to protect his privacy, said he has participated both in person in a general support group for survivors of abuse and through two virtual groups. “People are Zooming right and left,” he said. “So, it’s not that unfamiliar to participate in an online group.”

Paul said he has been through a lot of therapy and is surprised at the growth he is experiencing from the online group.

“When I’m with these people, there’s some sort of soul recognition … that has opened me up even more to feeling,” he said. “I feel more whole and more comfortable in a new way being around these people, and it’s surprising.

“I say this with some caution, but to me it is a ministry in the broadest sense of the word,” he added. “When we are able to … fully be present to each other there, there’s an existential love that shows up. And that’s the power of the Spirit showing up and healing together.”

Paul said he appreciates that the archdiocese is open to this kind of work of the Spirit in the world. “It really says a lot about the largeness of heart and spirit coming from the archdiocese,” he said.

“What I’m finding in these groups is that the healing is coming from each other,” said Kaempffer, who experienced clergy abuse as an adult.

“And it’s pretty amazing how they are supporting one another,” she said. “How they affirm one another; they don’t try to fix one another. We just share our experience in a restorative justice framework. It’s just wonderful to witness.”

Deborah, a 60-year-old clergy abuse survivor from Coon Rapids, Minnesota, who also requested that her last name not be used, said she has participated both in-person and with virtual support groups.

She said she struggled before with “if people knew who I am and what’s happened, they wouldn’t want me here.” But now she has a place to be with those she describes as “the wounded lambs of the church,” where she also is able to offer compassion and listen to and validate people.

Having participants from other parts of the United States provides different perspectives, she said.

Whether she participates in person or via Zoom, Deborah said she is reminded of her childhood and growing up seeing the image of the Sacred Heart of Jesus.

“He’s showing you his wounded heart,” she said, “and it’s like what I experience with each of these people who come and share a little story. It’s like, here’s Jesus in that person showing me and … the feeling you get when Jesus shows you his heart in the pictures: ‘What can I do to heal you?’ Well, here he is sitting in front of you and this wounded member of the body of Christ. … You can help with healing someone.”

Umberger is on the staff of The Catholic Spirit, newspaper of the Archdiocese of St. Paul and Minneapolis.

PREVIOUS: ‘You are not alone,’ archbishop tells victims of wildfires