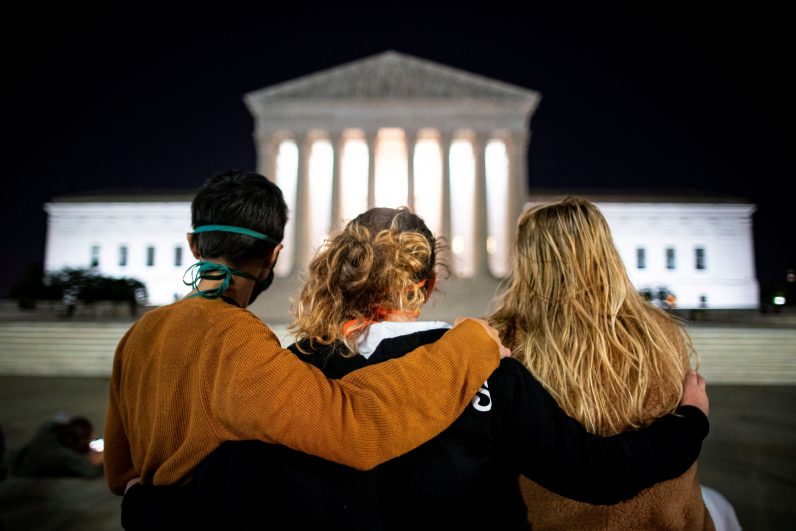 WASHINGTON (CNS) — Supreme Court Justice Ruth Bader Ginsburg, who died Sept. 18 at age 87, has been described in countless tributes as a cultural icon and a giant despite her small size.

“Our nation has lost a jurist of historic stature. We at the Supreme Court have lost a cherished colleague. Today we mourn, but with confidence that future generations will remember Ruth Bader Ginsburg as we knew her — a tireless and resolute champion of justice,” said Chief Justice John Roberts in a statement released by the court.

Ginsburg was surrounded by her family at her home in Washington when she died from complications of metastatic pancreatic cancer.

The second woman appointed to the court, who served there for more than 27 years, is primarily remembered for her pioneering work for gender equality and for writing pointed dissents and asking tough questions. In anti-death penalty and pro-immigrant opinions, she sided with Catholic Church leaders, but she differed with them in her support for legalized abortion, same-sex marriage and the mandate that contraception be covered in all health insurance plans.

Ginsburg, who was Jewish, had a framed passage from the Book of Deuteronomy on her chamber wall: “Justice, justice you shall pursue.”

“I am a judge, born, raised and proud of being a Jew,” she told the American Jewish Committee after her 1993 appointment to the court by President Bill Clinton. “The demand for justice runs through the entirety of Jewish history and Jewish tradition,” she said.

Ginsburg had what many describe as an unlikely friendship — sealed with humor and a shared love of opera — with fellow Justice Antonin Scalia, a Catholic, who disagreed with her on many issues in the courtroom. After his death in 2016, Ginsburg wrote: “From our years together at the D.C. Circuit, we were best buddies. We disagreed now and then, but when I wrote for the court and received a Scalia dissent, the opinion ultimately released was notably better than my initial circulation.” 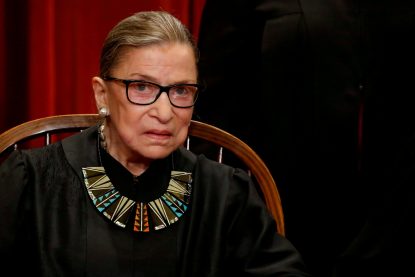 After Scalia’s death, Msgr. Peter Vaghi, pastor of the Church of the Little Flower in Bethesda, Maryland, said the friendship of the two justices, on opposing sides in the court, represented “the way things used to be in Washington. … One can differ and disagree on issues, but still respect each other as individuals. We’ve come a long way from that,” he told the Catholic Standard, archdiocesan newspaper of Washington.

A native of Brooklyn, New York, Ginsburg, graduated from Cornell University, attended Harvard Law and graduated from Columbia University School of Law in 1959. Before she served on the nation’s highest court, she argued six cases there over gender-based discrimination. She then served as a judge of the U.S. Circuit Court of Appeals for the District of Columbia Circuit, appointed to that court in 1980 by President Jimmy Carter. While serving on the federal appeals court, Ginsburg wrote key opinions on civil rights, freedom of speech and religion, and sex discrimination.

In 2018, two movies about her were released: “On the Basis of Sex,” which focused on her early career arguments for women’s equality, and the documentary “RBG.” The latter focused on her work as a legal pioneer and a pop-culture phenomenon whose moniker “Notorious RBG” was a spin on the name of the deceased rapper, “The Notorious B.I.G.”

Ginsburg, who worked out with a trainer, faced two bouts with cancer and missed her first oral argument last year while recuperating from surgery. In a talk at the University of Notre Dame in 2016 she said that she had no immediate retirement plans and would continue to work “as long as I can do it full steam, and that means I have to take it year by year.”

She also spoke at Fordham University in the New York borough of the Bronx that same year where she challenged students to use their legal talents to help their communities. She also reminded them the law is to “serve a society of people — all people, not just the wealthy.”

For the past five years, including this February, she addressed students at Georgetown University Law School, where her husband, Marty, who died in 2010, had been a professor.

Georgetown Law Dean William Treanor said he will never forget Ginsburg’s visits to the school and her interactions with the students. “It was a joy to watch their faces as they saw their hero. She embodied the best in the law, and I admired her more than I can say. Her death is a profound loss.”

Sister Helen Prejean, a Sister of St. Joseph of Medaille and longtime anti-death penalty activist, said on Instagram that she was “deeply saddened to hear that Justice Ginsburg has passed away. She was a trailblazer in the truest sense … Our nation is the poorer for her loss.”

Political leaders also expressed their admiration for Ginsburg, and depending on their political leanings, spoke of the urgency of not filling her post right away or quickly doing so, before the presidential election. Crowds also gathered outside the court for hours after her death was announced chanting, “RBG!”

Ginsburg told her granddaughter days before she died that she felt strongly that her Supreme Court seat should not be filled “until a new president is installed,” National Public Radio reported.

As tweets speculated who might take her seat on the bench if she is replaced soon, the name of Amy Coney Barrett, a Notre Dame law professor on the seat of the U.S. Court of Appeals for the 7th Circuit, was raised. Barrett’s confirmation hearings for that post received considerable attention when Senator Dianne Feinstein, D-California, grilled Barrett on the role of her Catholic faith.

At her Georgetown Law School talk in February, Ginsburg alluded to current political strife and a hope that things could improve.

“Susan B. Anthony never got to the see the 19th Amendment ratified, but she knew it would happen,” she said.

“In my long life, I have seen such positive change. Yes, there are things that make us all worried. But I am hopeful there will be leaders on both sides of the aisle who will say, it’s time to get together and work for the good of the country. That is my hope, and I would be content if I could see it happen in my lifetime.”

Ginsburg is survived by her two children, four grandchildren and one great-grandchild. She will be buried in a private interment service at Arlington National Cemetery in Virginia.

NEXT: Global biotech company ends use of aborted fetal cell lines for vaccines