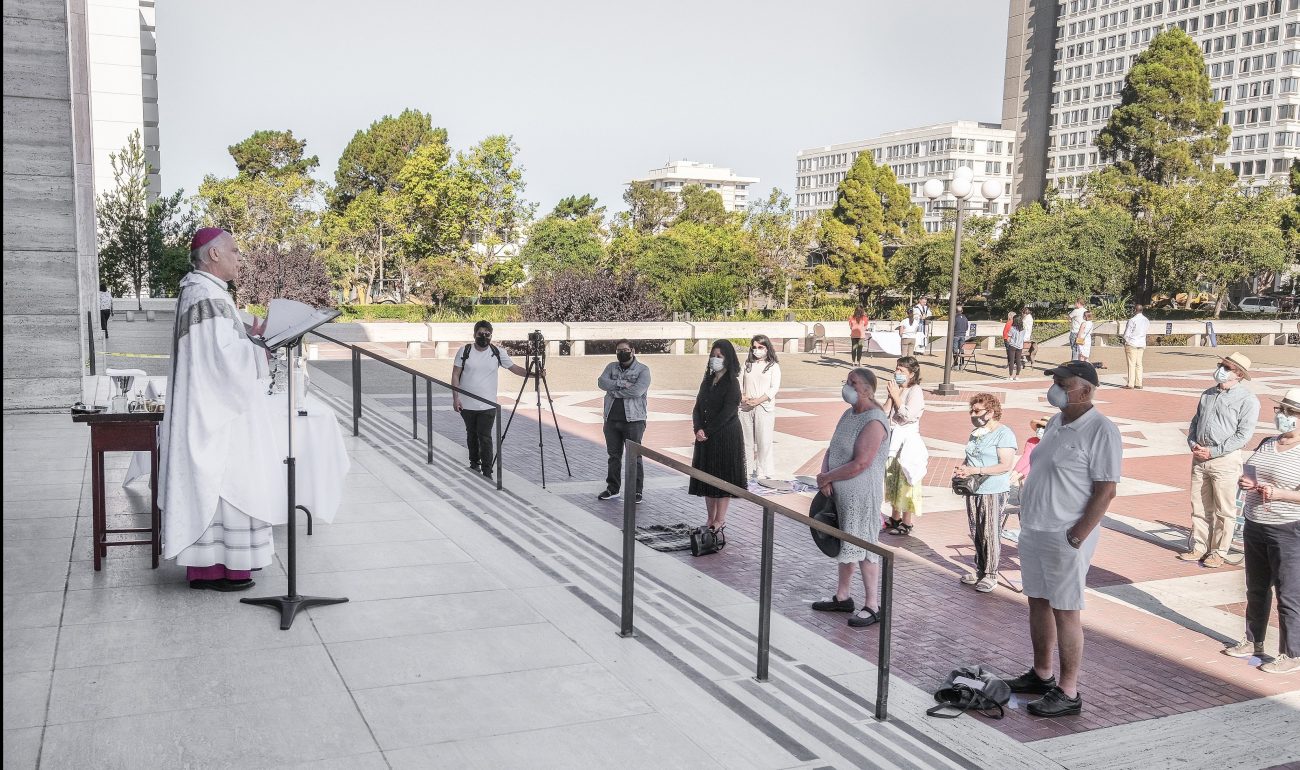 Currently, Masses may be celebrated only outdoors in San Francisco, with only 12 attendees. According to archdiocesan spokesman Mike Brown, a dozen priests have been celebrating Masses simultaneously on Sundays at Cathedral Plaza in the city.

“San Francisco is the only government in the entire Bay Area that restricts public gatherings to 12 people out of doors. Ours and others’ faith is being treated as less important than a trip to the hardware store, or a nice dinner out on the patio,” Archbishop Cordileone said in his Aug. 31 message to Mayor London Breed, Dr. Grant Colfax, the director of public health, and Dr. Tomas Aragon, a city health officer.

“This denial of access to safe outdoor public worship is a serious deprivation of our rights as Americans under the First Amendment and our spiritual needs as people of faith,” the archbishop said, adding that more than 1 million public Masses have been celebrated since the pandemic without any outbreaks of COVID-19.

Removing the “excessive limits” on public worship, he said, would be “at a minimum” of what he seeks.

California had banned all public worship statewide once the pandemic struck in March, allowing them to reopen in late May, but leaving the ultimate decision to cities and counties.

San Francisco had initially declared that public worship could resume June 15, but four days before that, it imposed the attendance and outdoor-only rules after an increase in COVID-19 cases.

In early July, the archdiocese agreed to the restrictions after the city threatened to file a cease-and-desist order and shut down churches after some churches in the city were found to be celebrating Masses indoors with larger numbers of worshippers, with neither priests nor worshippers wearing masks.

The restrictions apply to all houses of worship in San Francisco, which is both a city and a county. They do not apply to Marin and San Mateo counties, the other territory in the archdiocese’s jurisdiction.

Brown, in a Sept. 2 interview with Catholic News Service, said some parishes are celebrating Masses indoors, but only for livestreaming purposes.

“Particularly for us as Catholics, attending the Mass and receiving the Body and Blood of Christ in person is the source and the summit of our faith, and we have shown we can celebrate the Mass safely,” Archbishop Cordileone said.