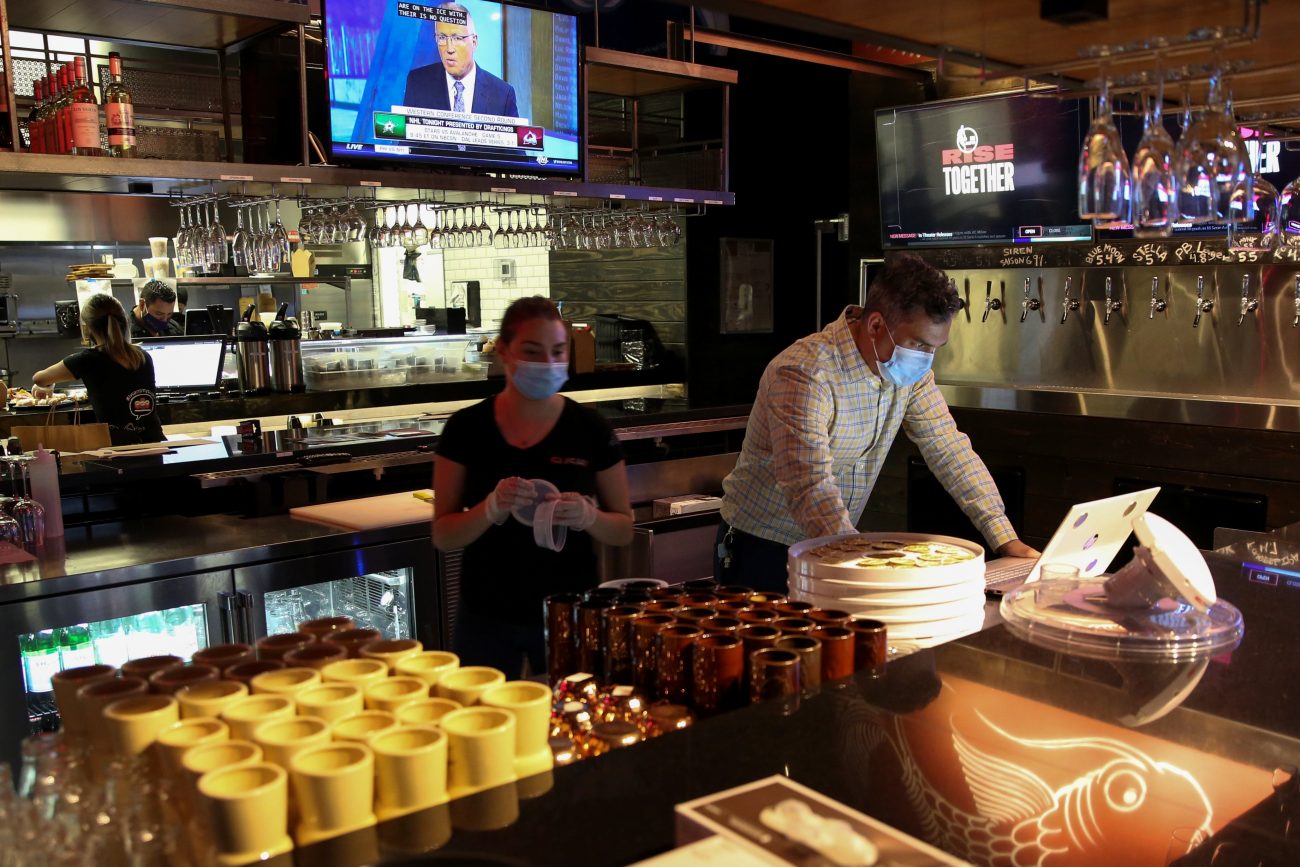 People in Miami work at a restaurant Aug. 31, 2020, during the coronavirus pandemic. (CNS photo/Marco Bello, Reuters)

WASHINGTON (CNS) — Given the “somber” realities imposed by the coronavirus pandemic, for companies to put profits over safety is “unjust,” said Archbishop Paul S. Coakley of Oklahoma City, chairman of the U.S. bishops’ Committee on Domestic Justice and Human Development, in the U.S. bishops’ annual Labor Day statement.

Even before the pandemic, “a significant number of Americans were trapped in low-wage jobs, with insecurity around food, housing and health care, and with little opportunity for savings or advancing in their career,” Archbishop Coakley said in the statement, issued Sept. 2. “Those same workers have been hit particularly hard, and, it is devastating to say, many have paid with their life. As one New York subway worker put it: ‘We are not essential. We are sacrificial.'”

Archbishop Coakley quoted Pope Francis in his exhortation,”Evangelii Gaudium,” saying: “Today we also have to say ‘thou shalt not’ to an economy of exclusion and inequality. Such an economy kills.”

“What was wrong before the pandemic has been accelerated now,” Archbishop Coakley said. “What may have been hidden to some is now revealed. Against this backdrop, the murder of George Floyd was like lighting a match in a gas-filled room.”

Pope Francis, who is currently writing a series of reflections on the pandemic, noted in an address based on these writings: “We are all frail, all equal, all precious. May we be profoundly shaken by what is happening all around us: the time has come to eliminate inequalities, to heal the injustice that is undermining the health of the entire human family!”

“Injustice does not need to have the last word. The Lord came to free us from sin, including the sins by which we diminish workers and ourselves,” Archbishop Coakley said in the Labor Day statement, titled: “‘Behold, I make all things new’ — Rebuilding a Dignified Post-COVID World.”

“Beginning with our own decisions, we might ask when we buy goods from stores or online: Do we know where they came from? Do we know whether the people who made them were treated with dignity and respect? Was the workplace made safe during the pandemic, and did workers receive a just wage? If not, what can we do to remedy this?” he wrote.

Government has a part to play as well, according to the archbishop. “Policymakers must address the outstanding needs that people have around nutrition, housing, health care, jobs and income support, as I and my brother bishops have written repeatedly. People are hurting, and some of the relief measures of previous legislation are expiring. Congress and the White House should reach a deal that prioritizes protecting the poor and vulnerable.”

“Founded to do more than meet emergency needs, CCHD supports low-income-led efforts to address poverty, create good jobs and be a force for transformation in families and communities. Over its history, CCHD has distributed over 8,000 grants worth more than $400 million to help create grassroots change,” he said. “Pope Francis has made the work of the popular movements that CCHD supports a key theme in his pontificate.”

Archbishop Coakley cited one example of how CCHD-funded organizations have stepped up since the pandemic was declared in March.

“Workers in meat processing plants are faced with dangerous working conditions as companies fail to provide basic protections from COVID-19 or do not make sufficient workplace modifications to reduce risk of exposure to the virus. The CCHD-supported Rural Community Workers Alliance has helped organize workers in rural Missouri, pressuring employers to take these concerns seriously and advancing the dignity of workers,” he said.

“These groups, as well as labor unions and other worker associations, make an invaluable contribution to the safety and well-being of workers.”

In addition to practicing solidarity with low-wage workers, “we can offer charitable assistance to all those who have become unemployed during this time by donating to local food banks and Catholic Charities agencies,” Archbishop Coakley said. “Catholic Charities helped 13 million people last year, and the demand has increased 30-50% so far during the pandemic and is anticipated to increase.”