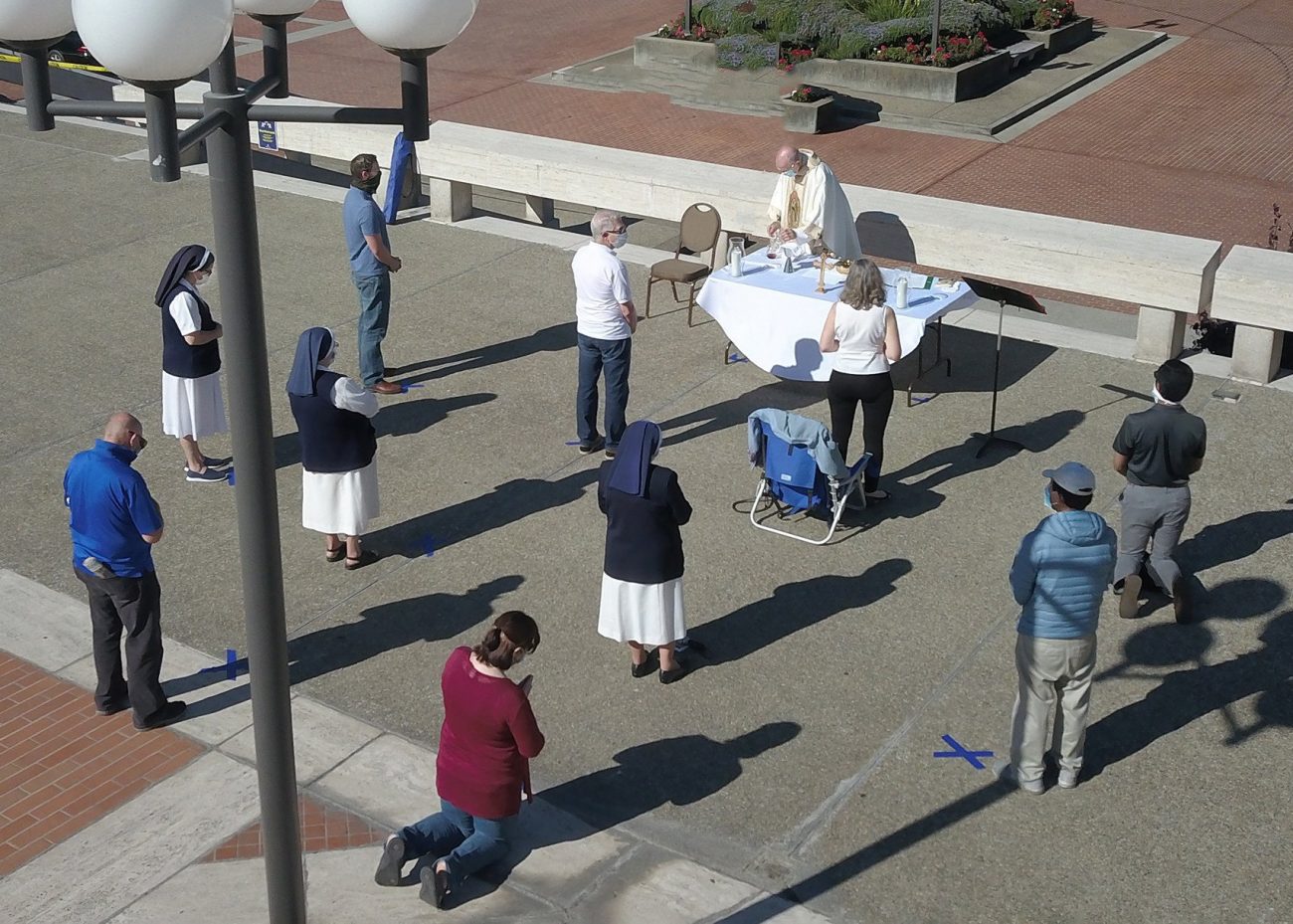 Jesuit Father John Piderit, San Francisco's archdiocesan vicar for administration, celebrates Mass simultaneously with three other priests on the feast of the Assumption near the steps of the city's Cathedral of St. Mary of the Assumption Aug. 15, 2020. (CNS photo/Dennis Callahan, Archdiocese of San Francisco)

SAN FRANCISCO (CNS) — San Francisco’s archbishop is calling on all parishes in the archdiocese to each gather parishioners to participate in eucharistic processions to U.N. Plaza next to City Hall Sept. 20 “to witness to the city that faith matters.”

Archbishop Salvatore J. Cordileone said Sept. 13 that three parishes are each organizing a procession that he hopes all parishes will join.

After reaching the plaza, the entire group, he said, will process together to the Cathedral of St. Mary of the Assumption for the celebration of multiple outdoor Masses. Participants will be wearing masks and following “proper social distancing,” he added.

“We can’t be silent any longer” about ongoing “punitive” restrictions on in-person Mass attendance, the archbishop said. He made the comments in a memo to all the priests of the archdiocese.

“Believers are being singled out for uniquely punitive treatment,” he said.

“We cannot simply standby while our people are treated with this lack of compassion for their needs, and this lack of respect for their rights,” Archbishop Cordileone wrote in the memo.

He has formed “a strategy committee consisting of both chancery staff and others, both clergy and lay, to advise me on how we can best make our voice heard in a peaceful but forceful way.”

In his memo, he noted that San Francisco Mayor London Breed announced that, effective Sept. 14, she would possibly ease some restrictions on attendance for indoor religious services in houses of worship and “in the more distant future possibly make other adjustments.”

The city has been allowing just 12 people to gather for an outdoor Mass, and in some churches where a Mass was being livestreamed, 12 people could be there. In both settings, participants of course must be masked and socially distant.

“First, the mayor announced that ‘houses of worship will be able to allow’ 50 people at religious services outdoors starting Sept. 14. However, the civil government has no right to dictate to the church whether or not it may ‘allow’ worship,” the archbishop said.

“Similarly, the civil government can issue regulations to protect public health that apply to everyone, the worshipping community included, but those regulations have to be reasonable and consistent,” Archbishop Cordileone said.

“They cannot be so restrictive as to effectively ban public worship. San Francisco is the most restrictive county in the entire country when it comes to public worship, but the state of California is not much better, with its limit of 100 people for an indoor worship service.”

He called it government “overreach” into “the life of the church and an infringement of our right to worship as protected by the First Amendment of the Constitution.”

The archbishop also said any numbers set for attendance at indoor and outdoor gatherings for worship are “arbitrary.”

“Why only 50 people outside? Why only 100 indoors? If social distancing is maintained, why is there any limit?” he asked. “The city, in fact, has allowed, and even participated in, street protests without any limit on number.”

The cathedral “could easily fit 1,000 people either indoors or outdoors, with proper social distancing,” he said, adding that Breed “hopes to allow” attendance for indoor religious services at 25% capacity, up to a maximum of just 25 people. This is “less than 1% of the total capacity of St. Mary’s Cathedral,” he added.

He reminded the priests he has worked behind the scenes “to partner with the city to protect our own people’s health and that of our neighbors, and to demonstrate a determination to adhere to sound principles of public health.”

Archbishop Cordileone said among his efforts, he presented city officials with data “showing Masses can be conducted safely.”

He said three infectious disease specialists reviewed data on over 1 million public Masses celebrated over the last 14 weeks and concluded that for churches following health protocols, such as opening windows, sanitizing properly, closing off every other pew and socially distancing, “no outbreaks of COVID-19 have been linked to church attendance.”

“I have done my best to make the case that the Mass is safe, and the data show that, but it has been to no avail,” Archbishop Cordileone said.

He asked the priests to help with three things: get a group together for the Sept. 20 processions; urge Catholics to go to the website FreeTheMass.com and sign a petition calling on Breed to lift her “unfair restrictions” (over 3,500 people signed it the first week it was posted); and display prominently at their churches a banner with the motto “We Are Essential: Free the Mass!”

The archbishop said the banners are being made for the processions and afterward they will be available to pastors to display at their churches; 100 banners will be in English, 15 in Spanish and five in Chinese.

In a Sept. 14 op-ed in the San Francisco Chronicle newspaper, one Catholic parishioner pleaded with Breed to compromise on the congregation size for indoor worship.

Kathryn Reese, a parishioner of San Francisco’s Church of the Epiphany for more than 40 years, said that as a Black Catholic, her faith has sustained her through good and bad times and receiving Communion at Mass “is for me, as it is for all Catholics, the Bread of Life.”

Reese wondered how it is she is not restricted by the government from spending hours shopping at Nordstrom department store while being masked and keeping socially distant, but she cannot attend indoor Mass.