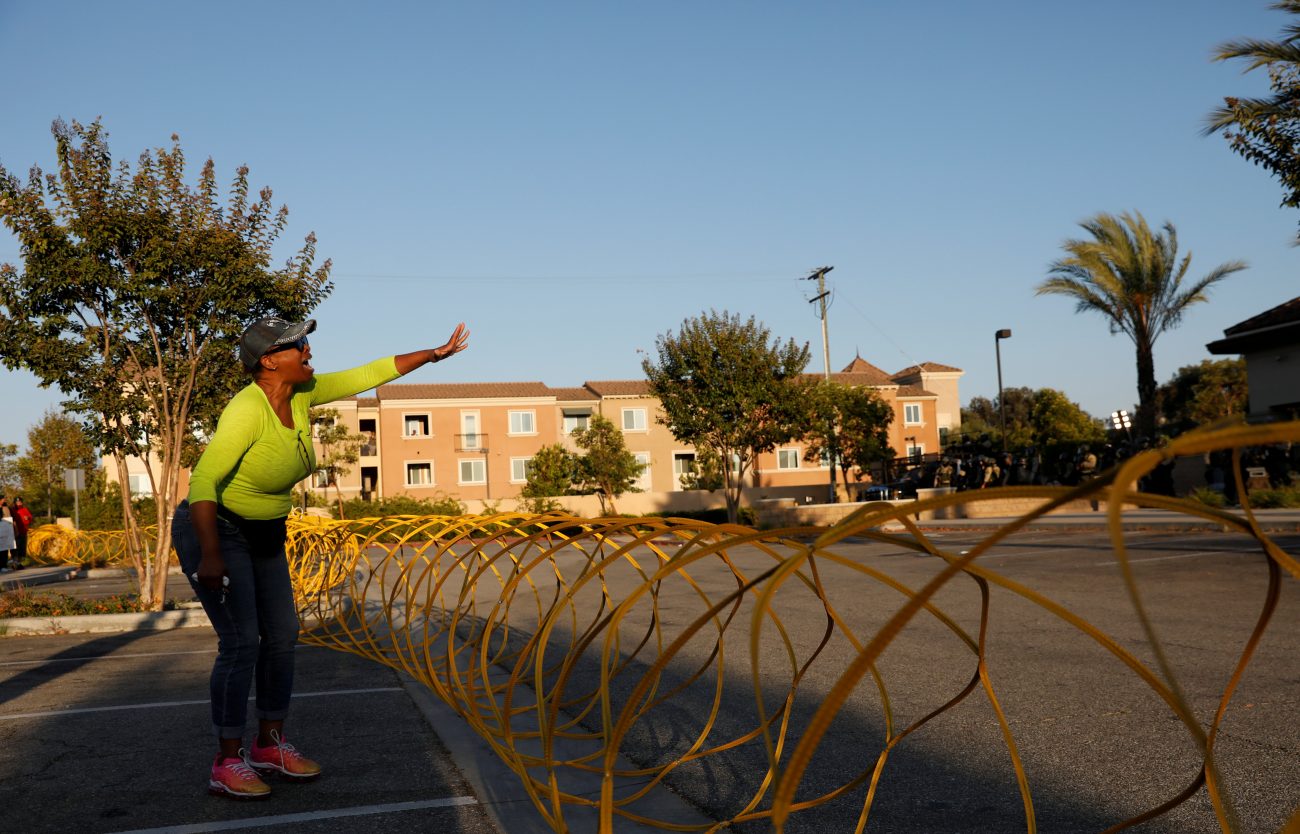 A demonstrator in Los Angeles gestures outside the Los Angeles County Sheriff's department Sept. 1, 2020, during a protest against the shooting death of Dijon Kizzee. Authorities report that Kizzee, a Black bicyclist, was stopped for a traffic violation, assaulted a deputy and reached for a firearm that he dropped. (CNS photo/Patrick T. Fallon, Reuters)

LOS ANGELES (CNS) — The Catholic bishops of California have announced a yearlong initiative to address personal and systematic racism, both in the church and wider society.

After a Sept. 9 Zoom conference with African American Catholic leaders from their state, the California bishops released a statement pledging to “begin a journey aimed at converting our hearts to more fully understand the extent and nature of the sin of racism in ourselves, our church and our nation. This journey is intended to offer tangible change.”

The meeting and announcement occurred on the feast of St. Peter Claver, which many dioceses — including all in California — observed as a day of prayer and fasting to end racism. St. Peter Claver was a 17th-century Spanish Jesuit who ministered to enslaved Africans in the Caribbean.

The 25 diocesan and auxiliary bishops of California spent three hours listening to three African American Catholic leaders, two laywomen and a priest, who recounted the racism they had experienced inside and outside the church.

“The people shared from their heart. Some of the things were pretty tough to listen to,” said Steve Pehanich, director of communications and advocacy for the California Catholic Conference.

As an example of everyday slights, a high-ranking employee in a Catholic institution spoke of recently moving to a well-to-do community, where her new neighbors asked if she was the nanny, he said.

Although some stories reflected badly on the church, “the bishops were touched. There were some tears. There were some hard to bear moments, but I think they really appreciated it,” Pehanich said.

The California initiative will unfold in three phases: listening, dialogue and action. It was important to the bishops “to listen before we jump to solutions and act as if we know the answer,” Pehanich said.

Listening sessions at the parish, diocesan and statewide levels “will be designed to understand the impact on individuals of racism in our nation, our society, and our church so we can address it and eliminate it wherever we can,” the bishops wrote.

All Catholics in California will then be urged to use the knowledge gained from those sessions as the basis for dialogues that include African-Americans. Finally, in 2021, “we will implement strategies that root out racist thinking and practices and foster a ‘culture of encounter’ within all aspects of our dioceses, parishes, places of education and homes.”

The initiative is a response to the nationwide protests that followed the May 25 death of George Floyd. The African American man, who a store employee had accused of spending a counterfeit $20 bill, died after a white Minneapolis police office knelt on his neck for almost nine minutes. He was declared dead later at the hospital.

The outline for the bishops’ initiative draws on church teaching. It quotes an encyclical of St. John Paul II, “Sollicitudo Rei Socialis” (“On Social Concerns”), which urged Catholics to address both personal sin and the “structures of sin” that sinful people create. The anti-racism initiative also cites the U.S. bishops’ guidance on political engagement, “Forming Consciences for Faithful Citizenship,” which identifies racism as a violation of human dignity that can never be justified.

The goal is to create an ongoing culture in which racism will be neither practiced or ignored, and in which racial reconciliation can occur.

“We must bring about a change of heart and cultivate new habits of the heart that will transform our communities with the wisdom and mercy of Jesus,” the bishops wrote.

Rodgers writes for Angelus, the online news platform of the Archdiocese of Los Angeles. 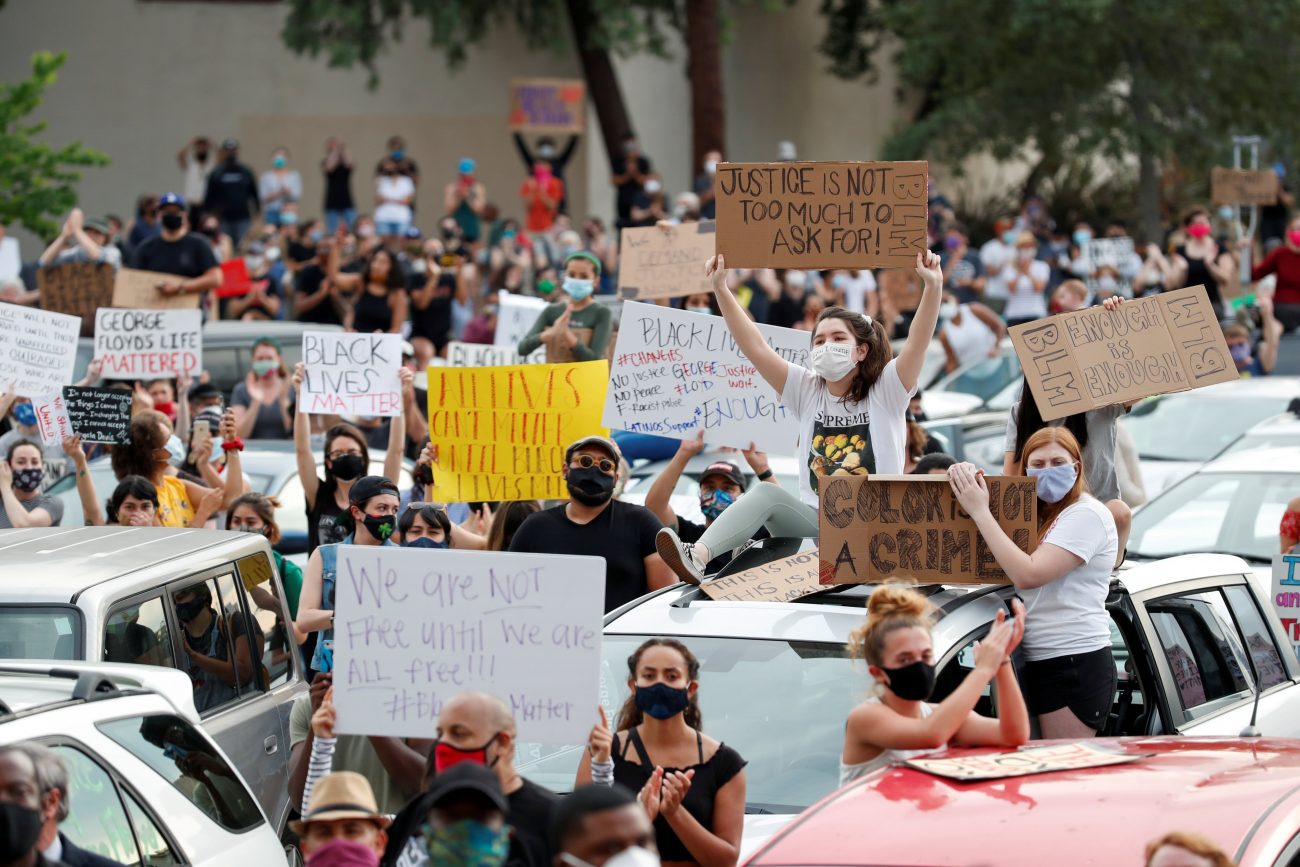 People in Pasadena, Calif., take part in a vigil for George Floyd June 2, 2020. Demonstrations continue after a white police officer in Minnesota was caught on a bystander’s video May 25 pressing his knee into the neck of George Floyd, an African American, who was later pronounced dead at a hospital. (CNS photo/Mario Anzuoni, Reuters)

NEXT: Pastoral urges Catholics to draw closer to God, one another amid pandemic