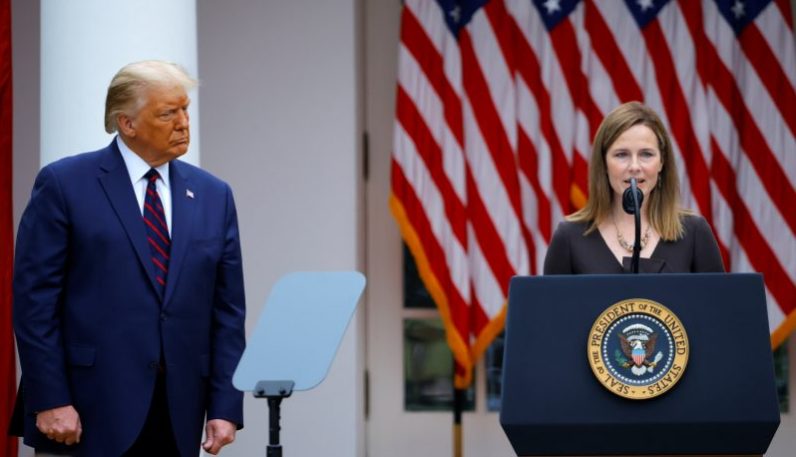 WASHINGTON (CNS) — Eight days after the death of Supreme Court Justice Ruth Bader Ginsburg, President Donald Trump announced Sept. 26 that Judge Amy Coney Barrett, a judge on the Chicago-based U.S. Court of Appeals for the 7th Circuit, is his nominee to fill that seat.

The president said he was honored to nominate Barrett whom he described as “one of the nation’s most gifted legal minds” to the court and praised her for her loyalty to the Constitution.

This should be a “straightforward and prompt confirmation,” he added before a small crowd seated in the White House Rose Garden. “The stakes are incredibly high,” he added.

Barrett, for her part, said she was “humbled by the prospect of serving in the Supreme Court,” and said if she were confirmed, she would always be mindful she would be following in Ginsburg’s footsteps.

Noting she would be in a group of nine as a justice, she said this is something she is very used to, with her husband and their family of seven children. She also stressed that if confirmed she would “assume the role to serve you,” the American public, and she has no illusions that the road ahead will be easy.

Trump’s pick is not a surprise. The 48-year-old Catholic and law professor at the University of Notre Dame was reported to be on the president’s short list of nominees just hours after Ginsburg’s death and news outlets began announcing she was the likely pick a day ahead of the official announcement. 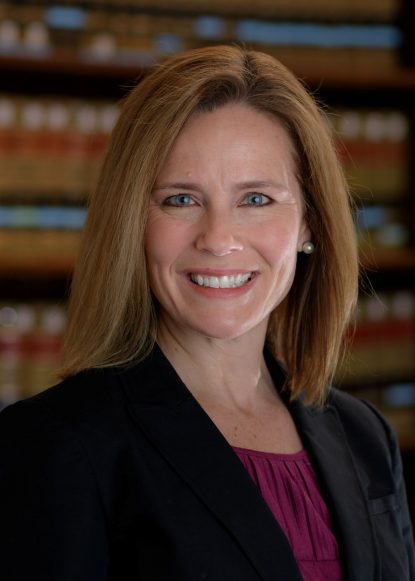 Amy Coney Barrett, a Catholic, who is a judge for the U.S. Court of Appeals for the 7th Circuit and a law professor at the University of Notre Dame is President Donald Trump’s Sept. 26, 2020, nominee to replace the late Associate Justice Ruth Bader Ginsburg. She is pictured in a 2018 file photo. (CNS photo/University of Notre Dame handout via Reuters)

The news drew immediate reaction from both sides of the political spectrum and Catholics were similarly vocal in either support or alarm over Trump’s nominee choice.

Brian Burch, president of CatholicVote, an independent political advocacy group, said in a Sept. 26 statement ahead of Trump’s formal announcement: “Catholics are thrilled with the expected nomination of Judge Amy Coney Barrett and believe she represents the best choice to protect the rule of law and our constitutional rights.” He added that she “deserves a speedy confirmation process and a Senate vote as soon as possible.”

Catholics expressing concern about Trump’s pick stressed unease with her stance on a number of issues. For example, John Gehring, the Catholic program director for Faith in Public Life, a Washington-based advocacy group, said in a Sept. 26 tweet: “Being ‘pro-life’ isn’t a single issue. Many Catholic voters are worried that Amy Coney Barrett could undermine health care access, workers rights’, environmental protections and other moral issues central to church teaching.”

Barrett is not an unknown. Two years ago, she was viewed as a potential candidate for the nation’s high court after Justice Anthony Kennedy retired, in the slot that was filled by Justice Brett Kavanaugh. At the time, Trump reportedly told advisers that he was “saving” Barrett if Ginsburg announced her retirement during his presidency.

In 2017, Barrett, who had clerked for Justice Antonin Scalia, was nominated by Trump to serve on the 7th Circuit in Chicago and she garnered support from some for her responses to the line of questioning she received in her confirmation hearing from Senate Democrats that focused on her Catholic faith.

Sen. Dianne Feinstein, D-California, told her: “The dogma lives loudly within you, and that’s a concern,” to which Barrett responded: “It’s never appropriate for a judge to impose that judge’s personal convictions, whether they arise from faith or anywhere else, on the law.”

After this interaction, several Catholic leaders spoke out against pointed questions about Barrett’s faith.

Feinstein had been referring to Barrett’s speeches and a 1998 article she co-wrote about the role of Catholic judges in death penalty cases. The senator also questioned Barrett about upholding Roe v. Wade, the 1973 Supreme Court ruling that made abortion legal.

When Sen. Dick Durbin, D-Illinois, asked Barrett if she considered herself an “orthodox” Catholic, Barrett said: “If you’re asking whether I take my faith seriously and am a faithful Catholic, I am. Although I would stress that my present church affiliation or my religious beliefs would not bear in the discharge of my duties as a judge.”

She ended up getting bipartisan support and was confirmed with a 55-43 vote.

Prior to this vote, The New York Times reported that Barrett was a member of a group called People of Praise, an ecumenical charismatic community, which gained some attention at the time that has now been revisited. The group, based in South Bend, Indiana, has more than 1,700 members living in 22 branches in the United States and its members are primarily Catholic.

A key aspect of the group is that many of its members sign a lifelong commitment or covenant. Massimo Faggioli, a professor of theology and religious studies at Villanova University, said the Senate Judiciary Committee should be prepared to “examine any covenant — a solemn contract binding before God” that Barrett signed in the course of becoming a full member of the group. “Doing so will protect, not erode, America’s foundational value of religious liberty,” he wrote in a Sept. 24 commentary in Politico magazine.

In 2018, Our Sunday Visitor spoke with Auxiliary Bishop Peter L. Smith of Portland, Oregon, who is a member of People of Praise, who said misunderstandings about the group are a “a fundamental part of what’s going on in our culture and in our political system right now — where we decide we don’t like somebody, maybe they have different views from us … so we demonize them.”

Another concern expressed by those opposed to Barrett’s nomination is that she could be a vote for dismantling Roe v Wade.

In her 2017 hearing she said she would “commit, if confirmed, to follow unflinchingly all Supreme Court precedent,” adding: “I would not want to leave the impression that I would give some precedents more weight than others because of some sort of academic disagreement.”

As a judge, she has not ruled specifically on abortion cases but as a member of the full appeals court she has voted in a few Indiana cases related to abortion. After several judges determined that an Indiana law requiring fetal remains to be buried or cremated following an abortion was unconstitutional, Barrett voted to rehear the case. She also dissented when appeals court judges attempted to block an Indiana law mandating parental consent for a minor to have an abortion.

In a 2013 speech at University of Notre Dame, she said if Roe were overturned, “abortion would be neither legal nor illegal throughout the United States. Instead, the states and Congress would be free to ban, protect or regulate abortion as they saw fit.”

Senate Majority Leader Mitch McConnell, R-Kentucky, has vowed that Trump’s nominee “will receive a vote on the floor of the United States Senate” which Democrats have criticized since McConnell did not consider President Barack Obama’s nominee, Judge Merrick Garland, several months before the 2016 election. McConnell and other Republicans have said the situation is different this time because the same party, Republicans, control both the Senate and the White House.

Paolo Carozza, a Notre Dame law professor, said he was “conflicted” about his colleague potentially being rushed into a confirmation just weeks before the election.

He told WBEZ, Chicago public radio, that he would love to see Barrett on the bench “because I think she’d be a great justice,” but he said he wished there were “more sort of harmony and less conflict in the process of creating our highest court, because in the long run, I think it really undermines the credibility of the judiciary.”

Some in the Notre Dame community said Barrett would be a fair-minded justice, not guided by ideology but by her strict “originalist” reading of the U.S. Constitution.

Snead also said he does not believe there is anyone in the country “more well qualified than she is to be on the Supreme Court because of her combination of brilliance, her work ethic, her open mindedness, her charitable manner of engaging with people.”

Barrett has been married for more than 18 years to Jesse Barrett, a partner in a South Bend law firm who spent 13 years as a federal prosecutor in Indiana. Two of their children are adopted from Haiti.

She now faces the Senate process which includes public hearings, a committee vote and the Senate floor vote where a simple majority, or 50 votes, is needed to confirm her as the next Supreme Court justice. The Republicans have 53 seats in the current Senate, and if needed, Vice President Mike Pence could break a tie vote.

Although the exact timeline has not been set, Senate Judiciary Committee Chairman Lindsey Graham, R-South Carolina, has said he hopes to hold a final confirmation vote by the end of October, just days before the election.

If Barrett is confirmed as a Supreme Court justice she would be the sixth Catholic justice, joining Chief Justice John Roberts and Justices Kavanaugh, Clarence Thomas, Samuel Alito and Sonia Sotomayor. Justice Neil Gorsuch was raised Catholic but is now Episcopalian. Justices Stephen Breyer and Elena Kagan are Jewish. 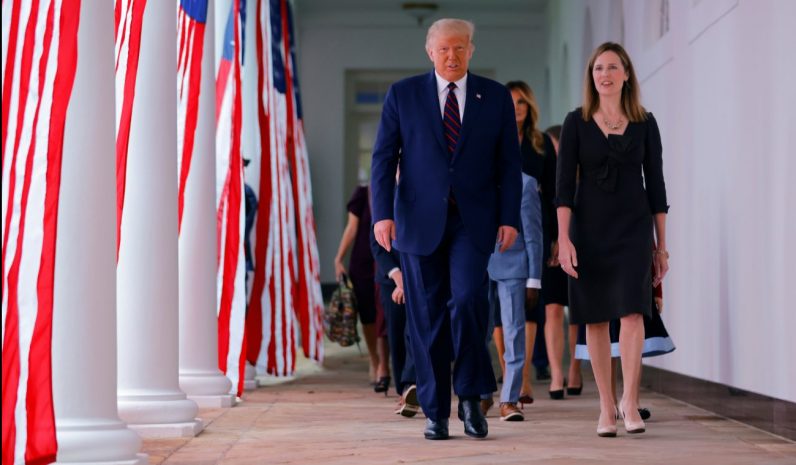