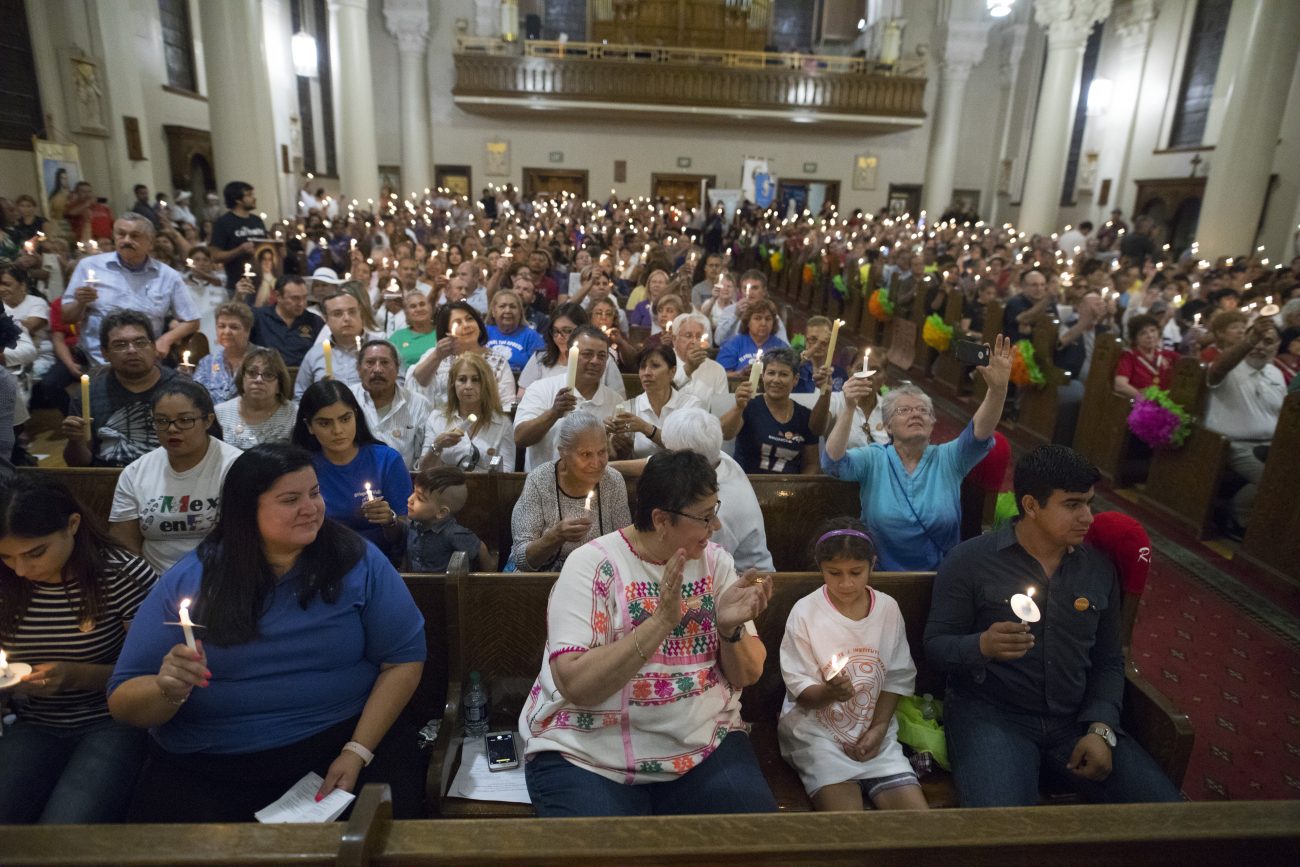 In this 2018 file photo, worshippers attend a candlelight vigil at St. Patrick's Cathedral in El Paso, Texas. The cathedral was vandalized Sept. 15, 2020, which caused major damage to a statue of the Sacred Heart of Jesus. (CNS photo/Jorge Salgado)

WASHINGTON (CNS) — Authorities in El Paso, Texas, have apprehended a suspect who is said to have entered the border city’s St. Patrick Cathedral Sept. 15 and destroyed an almost 90-year-old statue of the Sacred Heart of Jesus.

“I am devastated at this irreplaceable loss as I know members of this parish community and the whole church of El Paso will be,” diocese Bishop Mark J. Seitz said in a statement posted on Facebook late Sept. 15. “In this moment, we will reach out in confidence to the one this statue represented, and I know he will console us.”

El Paso authorities have not released the name of the suspect or other details. But the diocese’s Facebook post said the suspect walked into the sanctuary, which is open for prayer, at 10 a.m. Sept. 15 and attacked the statue, which was behind the main altar of the church.

The post included photos of the statue on the floor, knocked off its foundation, with its right arm broken off and most of the face, except for the jaw, smashed.

“I am in shock and we at the cathedral are heartbroken over such an unexpected situation,” said Father Trini Fuentes, rector of the cathedral.

Bishop Seitz said church officials don’t know yet about the person who carried out the vandalism.

“But he certainly must be a person who is greatly disturbed to have attacked this peaceful place in our city and this image of the King of Peace,” he said. “I hope this might be the impetus for him to receive the help he needs. He will be in my prayers.”

He said the statue, with open arms and “heart aflame with love for us,” was one of his favorite representations of Jesus and he took inspiration from it as he prepared for Mass.

“As sad as I am to see a statue attacked and destroyed, I am grateful that it was not a living person,” Bishop Seitz said. “But a statue, particularly this statue, concretizes and connects us to persons and ideals that are not visible to our eyes. They reveal to us realities that are close to us, but unseen.”

Just a day before, a church in Midvale, Utah, also reported a break-in and vandalism of a statue of St. Therese, which also was knocked off its pedestal and resulted in its head breaking off, Fox News 13 in Utah reported Sept. 15. The following day, it added, a house on the parish property was reportedly burglarized.

Via Twitter, the Texas Catholic Conference of Bishops said it was joining in prayer with the Diocese of El Paso “in reparation for the act of vandalism at St. Patrick Cathedral.”

PREVIOUS: Pastoral urges Catholics to draw closer to God, one another amid pandemic