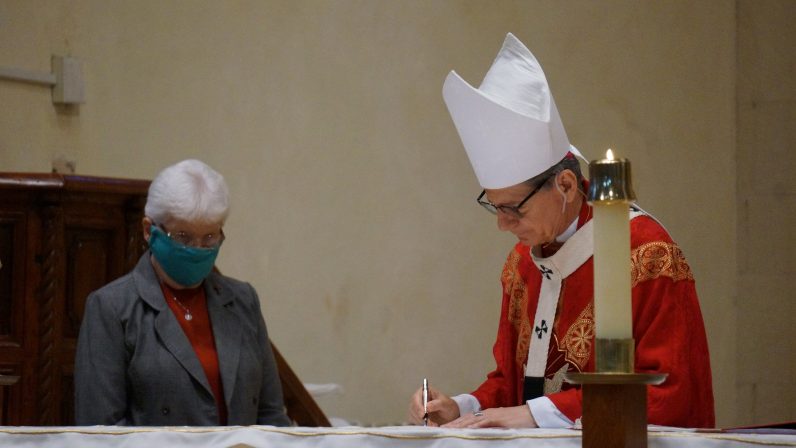 SAN ANTONIO (CNS) — Archbishop Gustavo García-Siller of San Antonio said that “we do not know exactly what God has in store for us,” but he hopes that while “we wait and work” for this COVID-19 crisis to be over, it will not “just be an episode in history from which we recovered.”

Instead, it must be “a turning point that we embraced allowing God to heal and transform each one of us, our archdiocese and the whole world into something better,” he said before promulgating a new pastoral during a Mass at San Fernando Cathedral Sept. 14, the feast of the Exaltation of the Holy Cross.

The pastoral, which is in English and Spanish, is titled “Transformed by Hope, Let Us Rebuild Our Tomorrow!” and addressed to all the people of the Archdiocese of San Antonio.

“In this challenging time, we ask the Holy Spirit to grant us freedom in spirit, in order to loosen ties and hold-backs that prevent our souls from flying toward the divine,” he said before signing the pastoral at the Mass, attended by ministry representatives from various institutions — primarily educational entities — in the archdiocese.

“We pray humbly and constantly for the virtue of fortitude, a gift of the Holy Spirit that is rooted in trust,” Archbishop García-Siller he said.

The 38-page document states: “Ignited by the Holy Spirit who dwells in our hearts, let us dive into the dynamics of the current times! Let us come in closer spiritual contact with God and with one another! 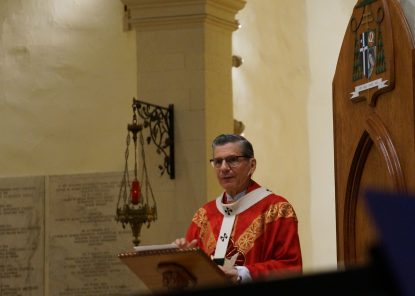 “Let us recognize and caress the face of the Lord — whom we adore — in the flesh of every suffering brother or sister. And may our perception, thoughts, feelings and actions become a channel of God’s love for his children. Ven, Holy Spirit, Ven!”

Archbishop García-Siller in the pastoral said that so many have suffered in numerous ways due to the COVID-19 pandemic.

“Hundreds of thousands of people around the world have lost their lives, millions have suffered from the illness or have lost dear ones. Countless more are currently undergoing financial turmoil, necessary seclusion or find themselves facing varied causes of seemingly unbearable distress,” he said.

The archbishop said he was “particularly heartbroken” by how the pandemic has exacerbated the “neglect and abandonment” experienced by the marginalized in society, those who are looked on “with indifference or disdain,” who lack access to health care, food and shelter and have other hardships — all of which has been made worse by the pandemic.

As the scientific community works on a COVID vaccine, “we must also cure a larger virus, that of social injustice, inequality of opportunity, marginalization and the lack of protection for the weakest,” he said quoting Pope Francis from his Aug. 19 general audience.

More than ever immigrants “are being treated in less than human ways in many dimensions of our social life, including the legal system,” he said, and “some ethnic groups are suffering more than others.”

“Unequal opportunities and services, stereotypes and prejudices, still tremendously affect the way African American communities are generally treated, as opposed to most people of Western European descent,” he continued. “The same can be said about Native American groups, Hispanics and others.”

During this time, he said, an increased number of people of East Asian and Pacific Island heritage, “have been mocked, bullied and assaulted.”

The “tremendous recession” caused by the pandemic has “exposed grave deficiencies in our economic system,” leading more low-income people and the middle class to struggle financially, while the rich get richer, he said.

He expressed concern the pandemic and the suffering it has caused have led some to promote “the business of abortion and euthanasia,” with the latter being used to deprive the elderly and the terminally ill of the natural end to their pilgrimage due to a lost sense of the meaning of life in their suffering, and because their treatments are considered too costly by people who care more about their own profit.”

Archbishop García-Siller also called it scandalous some use fetal cell lines taken from aborted babies for research purposes, including trying to develop a COVID vaccine.

He pointed to other important problems drawing attention during the last few months, including the “brutality of some police officers and its frequent connection with racism.”

“Legitimate indignation has triggered demonstrations, which have been infiltrated by violent agitators and ideological agendas. In addition to that, we have witnessed the desecration and destruction of religious and historic symbols,” he added.

“In one way or another the pandemic is affecting the whole world. … There are undoubtedly some very unique challenges,” he said.

“We are all called to share each other’s burdens as well as their joys. ‘We are in this together’ is a common hope expressed these days,” he added.

During this time “not only is God’s grace readily available for us … but perhaps the circumstances to which the pandemic is forcing us can be used as opportunities to get to know ourselves, God and the people around us better, in new and different ways, as we grow spiritually,” he said.

“It is a paradox that now that many people cannot go out, we can make a trip inside ourselves,” he added.

“As we strive to look ahead full of trust and hope, let us turn our hearts and our minds to Mary,” Archbishop García-Siller said. Quoting the pope, he added: “Our Lady is the star that guides us.”

NEXT: Vandalism at El Paso cathedral destroys statue of Jesus