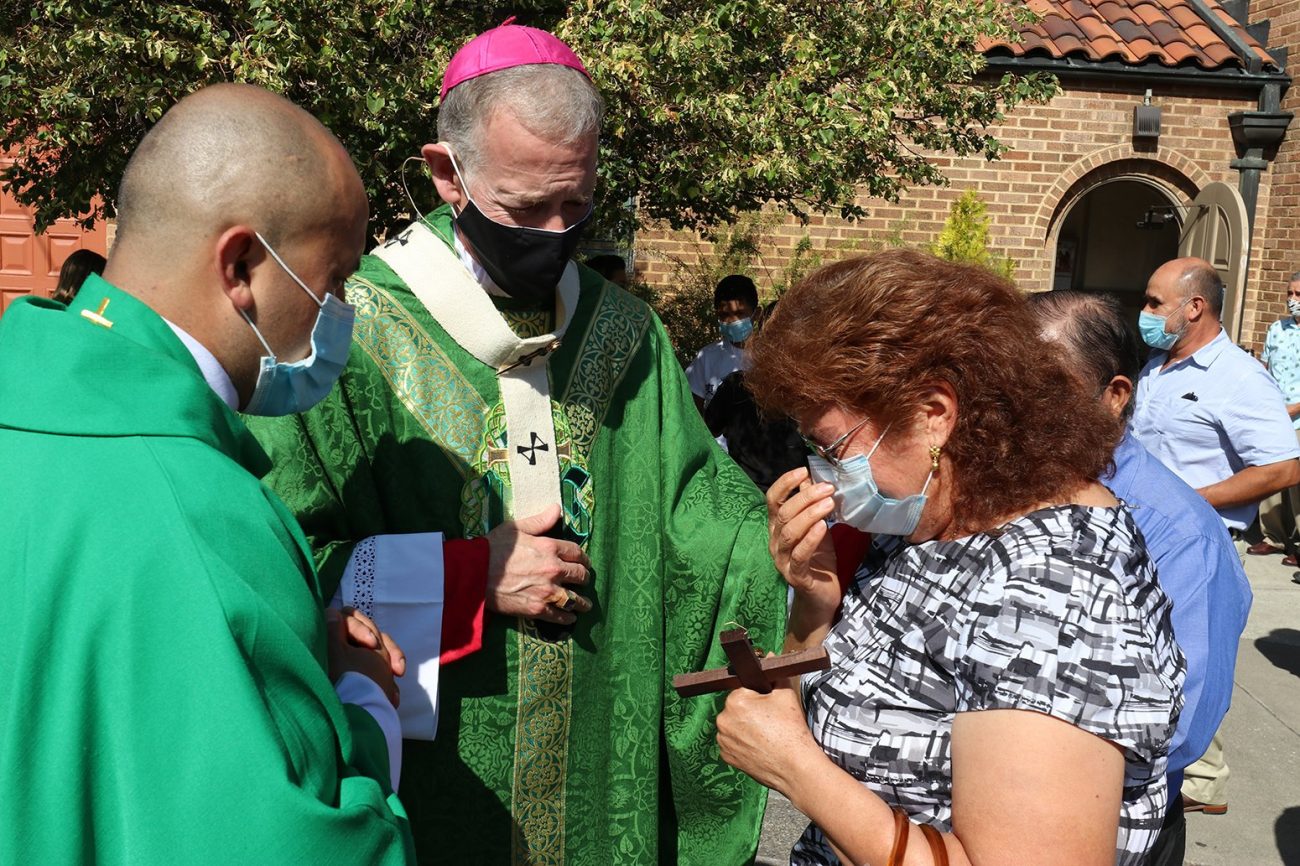 MEDFORD, Ore. (CNS) — Archbishop Alexander K. Sample of Portland visited Southern Oregon Sept. 19-20 to meet some of the hundreds of people who lost homes earlier in the month to powerful wind-driven fires.

In Sacred Heart Parish in Medford alone, almost 150 families are at a loss with homes in ruins and ashes. Many are lower-income Hispanics. Some could not get homeowners insurance or distrusted banks and so lost their life savings. Entire neighborhoods in Talent and Phoenix disappeared.

“It is beyond me to try to explain why such suffering is allowed to happen in our world,” the archbishop said during a Sept. 20 homily at Sacred Heart Church. “I’ve had some pretty interesting conversations with the Lord these days.”

The archbishop expressed compassion for people who have faced the pandemic, political strife and social divisions, only to be devastated by fire. “You have experienced a tremendous tragedy and loss,” he said.

Between Masses, the archbishop spoke with families, many of whom wept as they told him their stories.

“I bring to you not just my own personal presence but as the shepherd of this local church, I bring with me the love, prayers, concern, and the support of all your brothers and sisters in Christ,” he told them.

The archbishop pointed out the psalm antiphon of the day: “The Lord is near to all who call upon him.”

“That is the message I would like all of you to carry in your hearts in these days,” he said.

“God allows suffering and evil for one reason and one reason alone: To bring about an even greater good,” he said during Mass at Shepherd of the Valley Church in Central Point.

He explained that the most sublime example of this is the suffering and death of Jesus, which was terrible yet led to salvation and eternal life for believers.

“So, whenever we have those doubts about what God is up to, look at the cross and see that God has not abandoned us,” the archbishop said in Medford. “He loves those who are suffering so greatly in this hour.”

In the middle of suffering, it is not possible to see what will come later, he admitted.

“Trust in God,” he told the Central Point congregation. “He is with you now closer than ever. And just as he did not abandon his son but raised him to new life, he will not abandon you.”

The archbishop told fire victims that not only are fellow Catholics praying, but they are sending funds. The archbishop has asked national church organizations to aid the region.

“My brothers and sisters, know that you are not forgotten,” the archbishop said. “You are not alone.”

The Catholic Sentinel, Portland’s archdiocesan newspaper, plans in the coming days to tell the stories of families who have lost their homes.

A video of Archbishop Sample’s visit with victims of wildfires can be seen on YouTube at https://youtu.be/BzUSjXkPaI0.

PREVIOUS: Archbishop says God is calling immigrant church to be ‘light’ to nation of immigrants