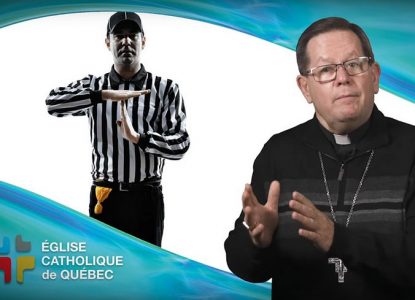 In a video posted online Sept. 9, Cardinal Gerald C. Lacroix of Quebec addresses archdiocesan priests, calling on them to take a “break” in catechetical programs to give them the time they need to think about what comes next. (CNS screenshot/YouTube)

QUEBEC CITY (CNS) — Cardinal Gerald Lacroix asked parishes in the Archdiocese of Quebec to “pause” their catechetical programs to give them the time they need to think about what comes next.

The last few months, he said, have given the Quebec church an “unhoped-for opportunity” to “begin anew,” he said in a video posted online Sept. 9.

“Fewer and fewer of our brothers and sisters in Quebec are Christians,” he said. “This cannot leave us indifferent. It is urgent that we evangelize and form (people) to Christian life. We must realize that our methods and ways of doing things do not bear the fruits we expect.”

“If you have not yet begun catechesis with children and young people to prepare them for the sacraments of Christian initiation, the time is right to take a break. Let’s at least give ourselves the autumn to reflect together,” he invited.

He asked for “time and space” to discern the next steps to implement “the priority of formation to Christian life for adults.”

“I know that this request is going to create a certain stir,” he said. “But without this pause, we know that it will not be possible to make in-depth changes, changes that are necessary.”

The next day, the Archdiocese of Quebec was quick to add that this was not a strict “moratorium.” The intention was that this pause may facilitate a “transformation” in favor of “the Christian initiation of adults,” said Marie Chretien, pastoral coordinator for the archdiocese.

The Archdiocese of Quebec said this pause would not affect baptisms or marriages even if, one day, pastoral approaches to these sacraments also would be reviewed.

These past decades, sacraments like reconciliation, first Communion, and confirmation have all known a steady decrease. Parishes also have a harder time recruiting volunteers to help give catechesis.

She was particularly touched by the attention given to adults. “It’s true that we can’t seem to develop this work in a broader way. We haven’t yet finished what we want to do.”

Catechesis, she added, is to be conceived beyond its stereotype of sacramental preparation, in order to be “for all ages” and become “an opportunity to listen to what resonates in oneself and in one’s experience.”

Daniel Laliberte, a former archdiocesan employee who now teaches the Centre Jean XXIII in Luxembourg, said he was delighted with this announcement. As a theologian, he has worked many on the sacraments of Christian initiation and has hoped for such a move for many years.

The stakes already seem clear enough to him: “To put it bluntly, if, after the pause required by the archbishop,” catechesis “does not start again having assumed these two changes — offering faith rather than just the sacraments, and deploying a solid catechesis for adults — then the pause will have been useless.”

Though many church workers have agreed for years that a change is necessary within the Quebec church, most wonder why they cannot seem to make it happen.

Laliberte believes the main problem is that few people are able to propose a plan that can clearly indicate the objective to be achieved and the steps to do it.

“Whether we like it or not, times have changed so much that the church, confined to its practices, has seen its credibility seriously eroded, so much so that it is at odds with today’s world,” warned the professor.

According to him, the issue is truly communitarian. And it starts when a “missionary church” committed to fraternal love and dignity is made visible, he said.