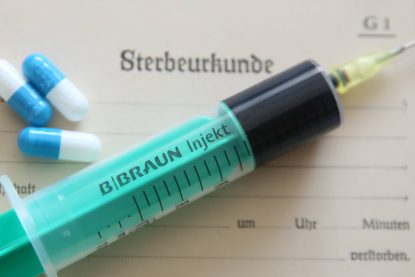 A photo illustration shows tools used in euthanasia. The Spanish bishops’ conference has denounced a proposed bill that would legalize euthanasia in Spain. (CNS photo/Norbert Fellechner, www.imago via Reuters)

VATICAN CITY (CNS) — Euthanasia legislation is headed for the Spanish Senate and, if passed, it would be a defeat for human dignity and would affirm a self-centered view of life that proposes death as a solution to one’s problems, the Spanish bishops’ conference said.

“To insist on ‘the right to euthanasia’ is typical of an individualistic and reductionist vision of the human being and of a freedom detached from responsibility,” the conference’s executive committee wrote in a statement released Sept. 14.

“On the one hand, the social dimension of the human being is denied, (by) saying ‘My life is mine and only mine and I can take it away,’ and, on the other hand, it is asked that someone else — that is, organized society — legitimize the decision,” the bishops wrote.

Spanish legislators are preparing for a final vote on the controversial law that would make Spain the fourth European country to legalize physician-assisted suicide after Belgium, the Netherlands and Luxembourg.

The move to vote on the proposed legislation, the bishops’ conference said, “is bad news, since human life is not a commodity at anyone’s disposal.”

The Spanish bishops also argued that legalizing euthanasia will exacerbate rising suicide rates in the country and “will not help in emphasizing to those who are tempted by suicide that death is not the right way out.”

Currently, assisted suicide is punishable in Spain with up to five years in prison. A person found to have been directly involved in someone’s death can face homicide charges and up to 10 years in prison.

El Pais, the Spanish newspaper, said the bill would allow adults with a terminal illness and those with serious and chronic disabilities to request help for assisted death from the public health care system.

Medicine should not be used to end life, but to cure, care, relieve and console those approaching their final days, the bishops said. They urged legislators to instead opt for palliative medicine and care, which “aim at humanizing the process of death and accompanying people to the end.”

“We advocate for an adequate legislation of palliative care that responds to the current needs that are not fully met. The fragility we are experiencing during this time constitutes an opportunity to reflect on the meaning of life, fraternal care and the meaning of suffering and death,” the bishops said.

“The ‘yes‘ to the dignity of the person, even more so in moments of greatest helplessness and fragility, obliges us to oppose this law which, in the name of a presumed dignified death, denies at its root the dignity of all human life,” the bishops said.

Cardinal Antonio Cañizares Llovera of Valencia said the government had become the enemy of society instead of its protector, while Cardinal Carlos Osoro Sierra of Madrid said the legislation represented the “betrayal of life.”

Cardinal Cañizares said he had not wished to intervene in politics but insisted that his pastoral responsibility as a bishop “does not permit me to shut up.”

Spanish media have reported that one survey has revealed that up to 87% of the public are sympathetic to the introduction of a euthanasia law, with about 70% of doctors in favor of a change in the law.

PREVIOUS: By the numbers: Statistics illustrate progress in tribunal reforms

NEXT: Canadian cardinal proposes a ‘break’ from parish catechesis