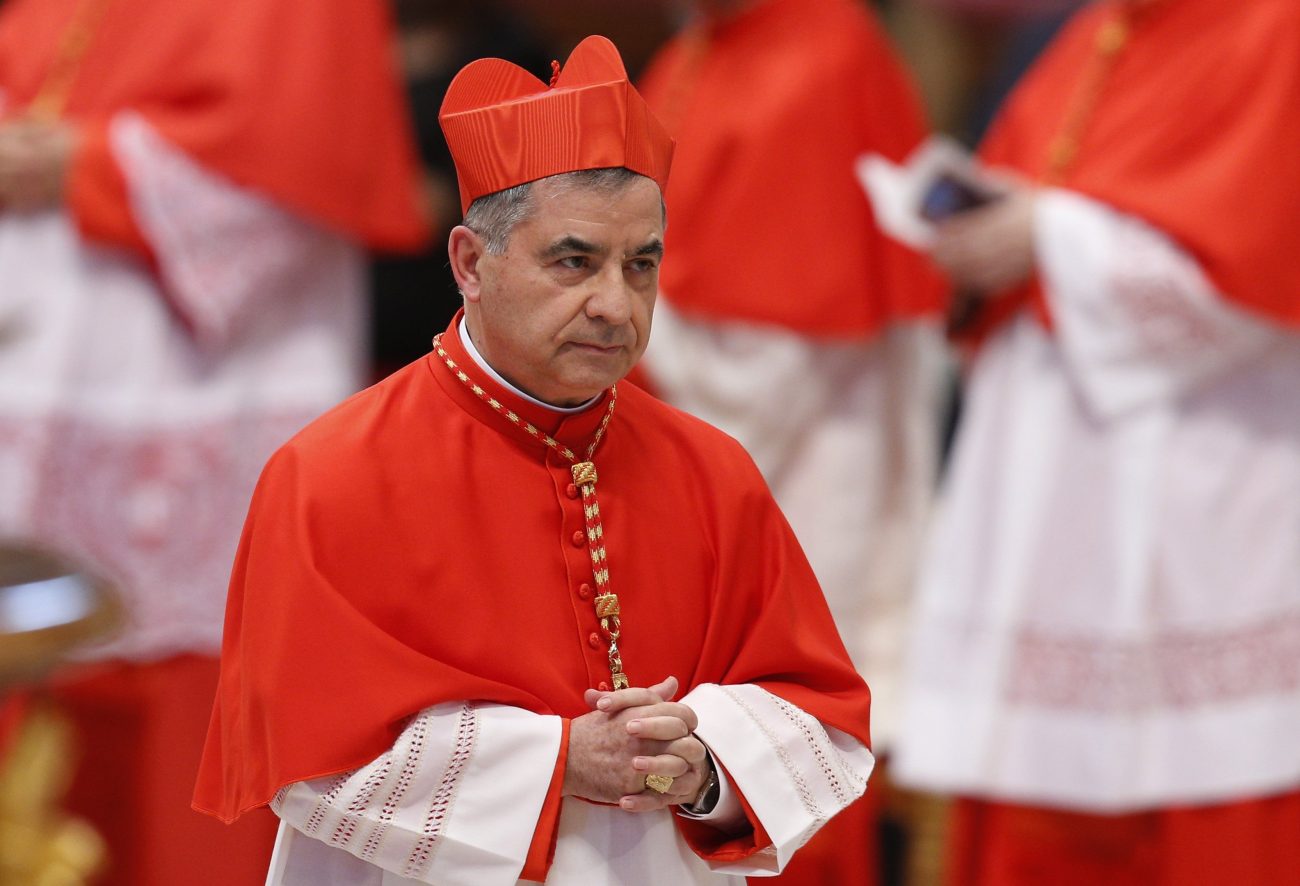 The Vatican announced Sept. 24, 2020, that Pope Francis accepted Cardinal Angelo Becciu's resignation as prefect of the Congregation for Saints' Causes and his renunciation of the rights associated with being a cardinal. Cardinal Becciu is pictured in a file photo. (CNS photo/Paul Haring)

VATICAN CITY (CNS) — In a move apparently related to Vatican financial scandals, Pope Francis accepted Cardinal Angelo Becciu’s resignation as prefect of the Congregation for Saints’ Causes and his renunciation of the rights associated with being a cardinal, the Vatican announced late Sept. 24.

The cardinal, 72, has been one of the central figures in a financial scandal involving millions of dollars of Vatican money invested in a property in London. He also is accused of using Vatican funds to support a Caritas project in his home diocese run by his brother.

But Cardinal Becciu told Il Fatto Quotidiano, an Italian newspaper, that investigators “have found nothing” to accuse him of regarding the London property. On the other hand, he said, “I may have made a mistake out of too much love for my diocese, but I don’t see the crime. I am ready to shout the truth.”

Cardinal Becciu will remain a priest and retired bishop but will no longer exercise the role of a cardinal, including by serving as a papal adviser, a member of Vatican congregations and councils, and as an elector of a new pope.

The Vatican announcement did not give a reason for the resignation but referred questions to Cardinal Becciu; he did not respond to Catholic News Service’s emailed request for comment.

However, in a brief telephone interview with the Italian newspaper, Il Messaggero, Cardinal Becciu said he was asked by Pope Francis to step down.

The cardinal told the newspaper he was “shocked” and “upset” at the pope’s request that he resign; the newspaper said the request came during a meeting Sept. 24, which first appeared to be a regular appointment to discuss approving decrees in sainthood causes.

The forced resignation, he said, was “a blow for me, my family, and the people of my hometown.”

“Out of a spirit of obedience and out of the love that I have for the church and the pope, I accepted his request to step aside. But I am innocent and I will prove it. I ask the Holy Father to give me the right to defend myself,” Cardinal Becciu said.

The last cardinal to renounce the rights and privileges of being a cardinal was Scotland’s Cardinal Keith O’Brien, former archbishop of St. Andrews and Edinburgh, who did so in 2015; he had resigned as archbishop two years earlier after admitting to sexual misconduct. He did not participate in the 2013 conclave that elected Pope Francis, and he died in 2018.

Theodore E. McCarrick, the former archbishop of Washington, resigned from the College of Cardinals in July 2018; he did not just renounce the rights and duties of a cardinal.

Before Pope Francis named him a cardinal in 2018 and appointed him to head the Congregation for Saints’ Causes, Cardinal Becciu had served for seven years as “sostituto,” the No. 3 position in the Vatican Secretariat of State.

It was in that position that he was involved in the Vatican purchase of a property in London’s posh Chelsea district which garnered attention in October 2019 when Vatican police conducted a raid on offices in the Secretariat of State and the Vatican financial oversight office.

The October raid was part of an investigation into five individuals, four of whom were once among the cardinal’s closest collaborators at the Vatican Secretariat of State.

The day after the raid, the Italian magazine L’Espresso published an internal notice as well as leaked documents alleging the raid was part of a Vatican investigation into how the Secretariat of State used $200 million to finance the London property development project in 2014.

According to leaked documents, the Vatican Secretariat of State purchased a majority stake in the London property in 2018 and incurred debts from deal.

Cardinal Becciu defended the purchase, saying that making property investments in Rome and abroad was a common Vatican practice and denying that funds from Peter’s Pence, the global collection for the poor, were used.

However, the Vatican investigation continued to focus on those involved in the property deal.

In June, Vatican authorities arrested Gianluigi Torzi, an Italian broker who served as the middleman in the Vatican’s purchase of the majority stake in the property from London-based Italian financier, Raffaele Mincione.

After spending 10 days in a Vatican jail cell, Torzi was granted a conditional release after providing “a detailed memorandum” and documents “deemed useful for the reconstruction of the facts under investigation.” He still faces Vatican charges of extortion, embezzlement, aggravated fraud and money laundering.

The London property deal involved “things that don’t seem ‘clean,'” the pope told reporters in November on his return flight from Japan. “It was the internal auditor general, who said, ‘Look, here is something that doesn’t add up.’ He came to me.”

The pope said he authorized the October raid after speaking with the Vatican prosecutor. He also said the investigation was proof that financial reforms that began under Pope Benedict XVI were working and that “the Vatican administration has the resources” to report and investigate suspicious activity.

Cardinal Becciu was born June 2, 1948, in Sardinia and ordained to the priesthood in 1972 for the Diocese of Ozieri.

After earning a degree in canon law, he entered the Vatican diplomatic service in 1984, serving at Vatican embassies and offices in the Central African Republic, Sudan, New Zealand, Liberia, Great Britain, France and, finally, the United States.

In 2001, St. John Paul II named him an archbishop and apostolic nuncio to Angola and to Sao Tome and Principe.

In 2009, Pope Benedict XVI named him nuncio to Cuba, a position he held until 2011, when the pope asked then-Archbishop Becciu to move to the Vatican Secretariat of State.

NEXT: Pope to U.N.: Respect for each human life is essential for peace, equality