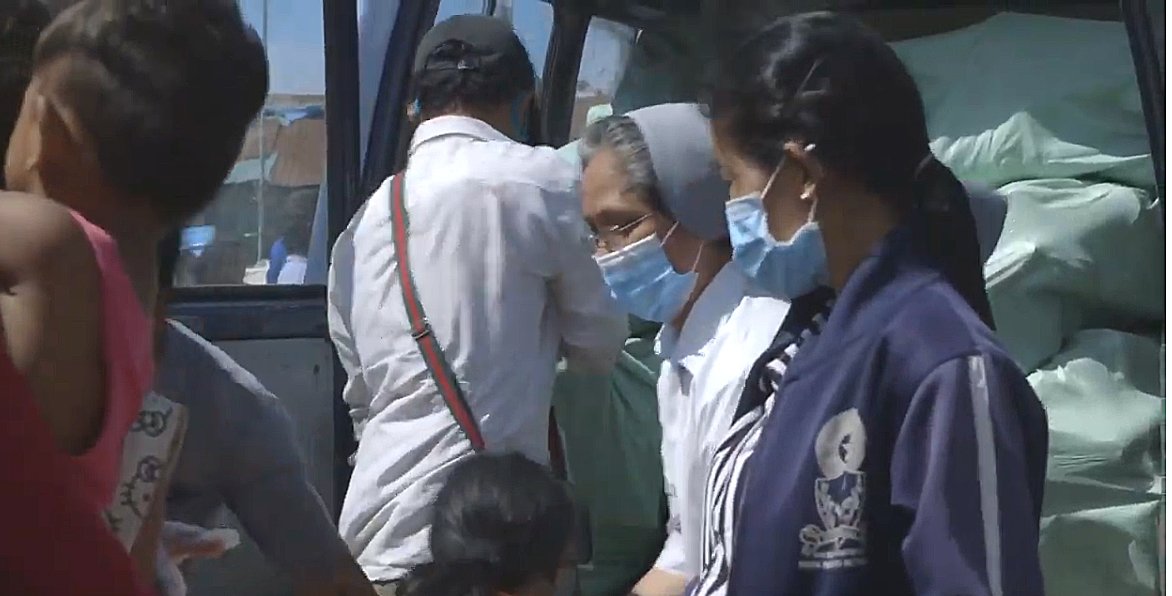 Salesian Sister Jessica Salvana works with volunteers to unload food for families of the children who, before the pandemic lockdown, attended school in Phnom Penh, Cambodia. The sisters' story is part of the #YouAreMySister campaign of the International Union of Superiors General, focusing on how women religious have experience that should be heard as governments and development organizations respond to the pandemic. (CNS screenshot/YouTube)

ROME (CNS) — A day after Pope Francis gave a general audience talk on the principle of “subsidiarity,” women religious from around the world launched a campaign illustrating the principle, which emphasizes local involvement in decision-making, listening to people’s real needs and adapting programs to meet those needs.

The International Union Superiors General, the organization of heads of religious orders counting more than 650,000 members around the world, launched their #YouAreMySister campaign Sept. 24.

“The international response to COVID-19 has to be more agile and more sensitive to local communities, with resources redirected to where there is the most urgent need,” Loreto Sister Patricia Murray, UISG executive secretary, said in a statement. “Sisters are uniquely placed to help address the most pressing issues in poor communities brought about by the pandemic because we are already at the center of community development efforts. But too often we are not being listened to.”

The campaign launch featured short videos from Cambodia, India, Brazil and Kenya recounting how, in response to new problems and new needs raised by the COVID-19 pandemic, women religious and their congregations switched gears.

For example, when schools in Phnom Penh, Cambodia, shut down, the Salesian sisters began visiting the children and their families and discovered that many were going without food. The sisters began distributing food and providing hygiene education in the students’ neighborhoods. In Tonantins, Brazil, an isolated Amazonian community, members of the Religious of the Sacred Heart of Mary and the Little Sisters of the Immaculate Conception provide health care and emotional support, but they also speak out for people often overlooked by regional and national officials.

Through the UISG campaign, the women religious are calling attention to how the pandemic, and especially its economic devastation, has increased the danger of human trafficking and contributed to hunger worldwide.

The sisters want government leaders and large humanitarian organizations to listen to them because they are listening to people at the grassroots.

The “State of Food Security and Nutrition in the World,” a report by U.N. agencies published in July, estimated that “almost 690 million people went hungry in 2019 — up by 10 million from 2018” and that the pandemic and its related shutdowns would make the situation much worse. The report estimated that, “at a minimum, another 83 million people, and possibly as many as 132 million, may go hungry in 2020 as a result of the economic recession triggered by COVID-19.”

Sister Murray told Catholic News Service the hashtag comes from Proverbs 7:4, which says: “Say to wisdom, you are my sister.”

“Anyone in the world can say to a Catholic sister, ‘You are my sister,’ because that’s how we feel about our brothers and sisters,” she said. But also, “we have to acknowledge that sisters have a wisdom to share and that wisdom comes from their practical experience on the ground.”

Right now, she said, the sisters on the ground are seeing increased hunger, greater needs for health care and a whole avalanche of problems creating the conditions that often lead to human trafficking.

“We are trusted. We are there. And we will stay,” she said.

The sisters’ service, their prayer, their study and reflection, Sister Murray said, means that they have something important and valuable to say to anyone planning post-COVID humanitarian and development projects — if they want projects that will make a difference.

“We’ve learned agility,” she said. The Second Vatican Council called on the church to “read the signs of the times” and that is something the sisters have done consistently, showing they are “able to pivot to meet new needs and form new partnerships.”

“It’s not about blowing our own horns,” Sister Murray said. Rather, it is about being part of local communities, listening to the people and seeing what works “to give individuals and communities the fullness of life the Gospel promises.”

“In a sense,” she said, “it’s a new missionary model in terms of you don’t come thinking you have the answers, but you know that you can be part of the solution and, together, working with the people at the grassroots level, you help find the solutions to hunger, health care and human trafficking.”

NEXT: Cardinal Becciu resigns as prefect, renounces rights as cardinal