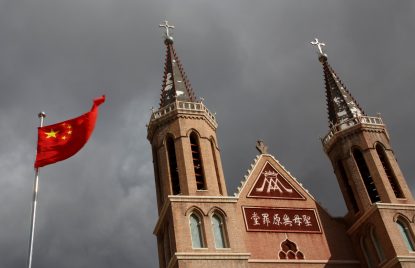 The Chinese national flag is pictured in a file photo in front of a Catholic church in the village of Huangtugang. (CNS photo/Thomas Peter, Reuters)

VATICAN CITY (CNS) — As the expiration of a provisional agreement signed between the Vatican and China approached, the Vatican secretary of state said he hopes it will be extended.

“Our intention is that it will be prolonged, that it will continue to be adopted ‘ad experimentum,'” or on a trial basis, said Cardinal Pietro Parolin, according to SIR, the news agency of the Italian bishops’ conference.

The “provisional agreement” on the appointment of bishops, which was signed by representatives of the Vatican and the Chinese government in September 2018, is set to expire in October.

The agreement was panned by several church leaders, including Cardinal Joseph Zen Ze-kiun, the 88-year-old retired archbishop of Hong Kong, who has been one of its strongest critics.

Speaking to journalists on the sidelines of a Sept. 14 event commemorating the 45th anniversary of the Helsinki Accords, Cardinal Parolin said he believes Chinese authorities may also want to continue the agreement.

While there has been no confirmation from the Vatican, the Reuters news agency reported Sept. 14 that, according to a source, Pope Francis had approved an extension of the agreement.

“With China, our current interest is to normalize the life of the church as much as possible, to ensure that the church can live a normal life, which for the Catholic Church means also having relations with the Holy See and the pope,” Cardinal Parolin said.

Although the Vatican also is concerned with issues such as “peaceful coexistence and overcoming tensions,” the current agreement is focused on the “ecclesiastical issue” of bishop appointments, the Vatican secretary of state said.

According to a report Sept. 11 by Asia News, Zhao Lijian, the Chinese foreign ministry spokesman, told journalists during a press briefing that the Vatican and China “will continue to maintain communication and consultation and improve bilateral relations.”

However, there was no official confirmation on whether the agreement will be renewed or extended.

“With the concerted efforts from both sides, the interim agreement on the appointment of bishops between China and the Vatican have been implemented successfully since it was signed around two years ago. Since the beginning of this year, the two sides have lent mutual support to each other amid the COVID-19 pandemic, jointly committed to uphold global public health security and accumulated more mutual trust and consensus through a series of positive interactions,” Zhao said.

NEXT: Creation must be protected, not exploited, pope says at audience