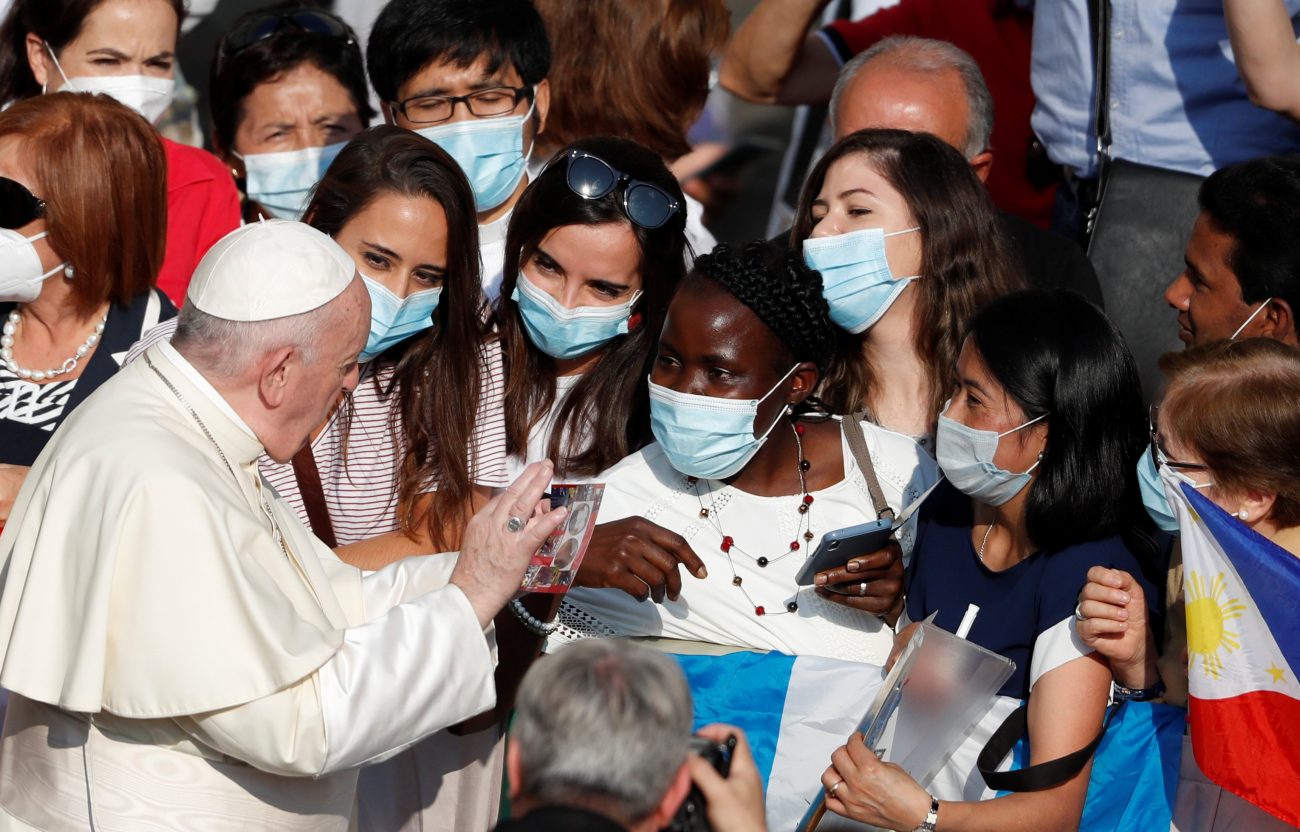 Pope Francis greets the crowd as he arrives for his general audience in the San Damaso courtyard at the Vatican Sept. 16, 2020. (CNS photo/Yara Nardi, Reuters)

VATICAN CITY (CNS) — Human beings must change their relationship with nature and view it not as an “object for unscrupulous use and abuse” but as a gift they are charged by God to care for and protect, Pope Francis said.

People are called to contemplate creation as a reflection of “God’s infinite wisdom and goodness” and not act as if people are the “center of everything” and the “absolute rulers of all other creatures,” the pope said Sept. 16 during his weekly general audience.

“Exploiting creation — this is sin,” he said. “We believe that we are at the center, claiming to occupy God’s place and thus we ruin the harmony of creation, the harmony of God’s design. We become predators, forgetting our vocation as guardians of life.”

The audience was held in the San Damaso courtyard of the Apostolic Palace. While the pope maintained his distance when greeting most of the faithful, he approached several pilgrims to sign autographs, speak directly to them or briefly swap his signature zucchetto for one brought as a gift.

Continuing his series of talks on “healing the world,” the pope reflected on the theme of “caring for the common home and contemplative attitude.”

Contemplation, he said, is the best “antidote against the disease of not taking care of the common home” and falling “into an unbalanced and arrogant anthropocentrism,” in which humans place themselves and their needs “at the center of everything.”

“It is important to recover the contemplative dimension, that is, to look at the earth, at creation as a gift, not as something to be exploited for profit,” the pope said. “When we contemplate, we discover in others and in nature something much greater than their usefulness.” 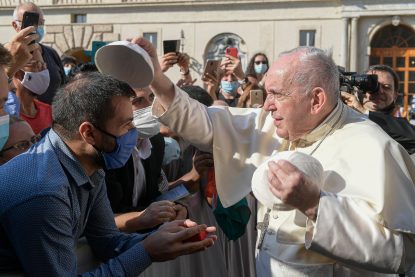 Pope Francis places a zucchetto he briefly swapped on the head of a pilgrim during his general audience in the San Damaso courtyard at the Vatican Sept. 16, 2020. (CNS photo/Vatican Media)

“Those who live to exploit nature, end up exploiting people and treating them like slaves,” the pope said. “This is a universal law: if you do not know how to contemplate nature, it will be very difficult for you to contemplate people, the beauty of people, your brother, your sister.”

Citing a recent report that the Pine Island and Thwates glaciers in Antarctica are collapsing due to global warming, Pope Francis said the consequential rising sea levels “will be terrible,” and he called on people to “guard the inheritance God has entrusted to us so that future generations can enjoy it.”

“Each one of us can and must become a guardian of the common home, capable of praising God for his creatures (by) contemplating them and protecting them,” the pope said.