Cardinal urges world to help restore Lebanon, not let it ‘fall into despair’ 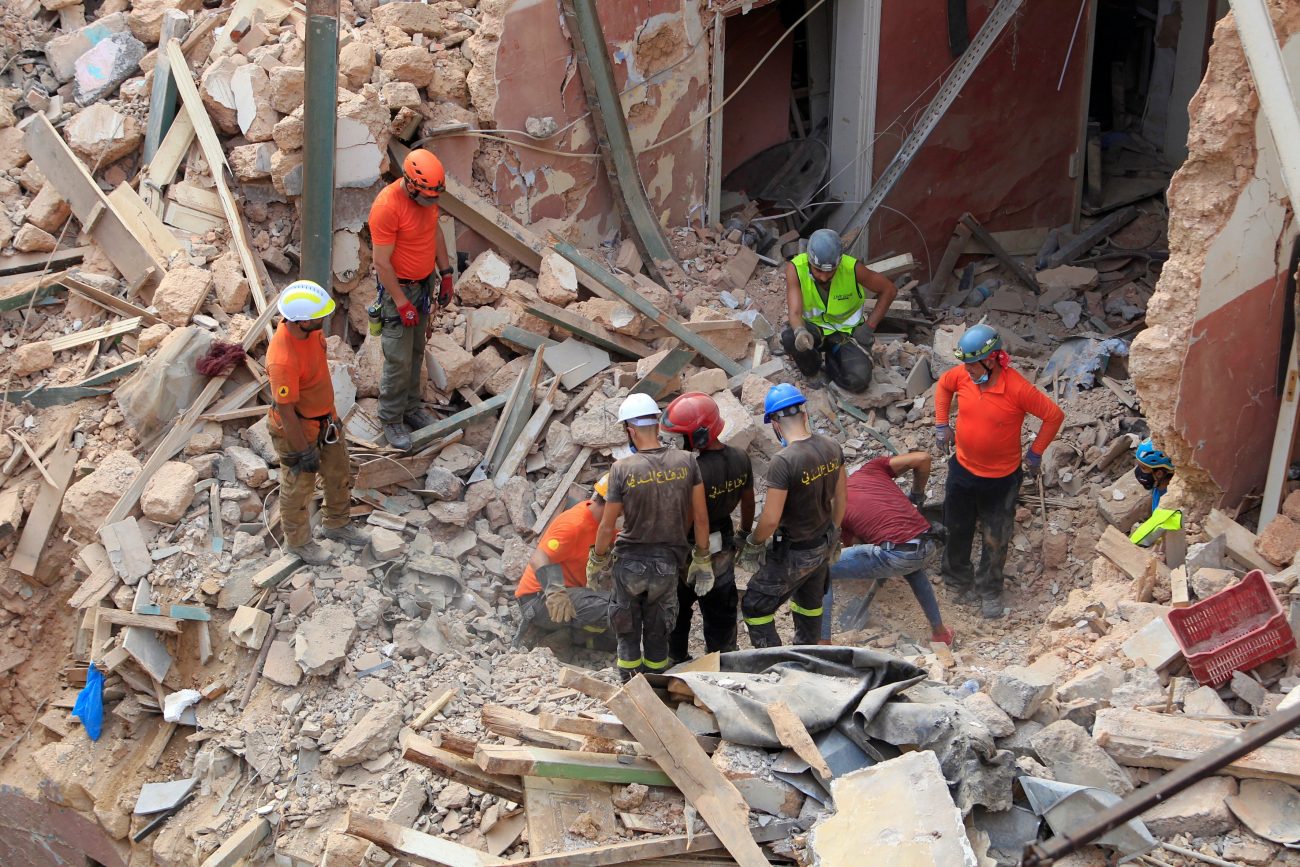 Members of a rescue team search through rubble of destroyed buildings in Beirut's port area Sept. 4, 2020, one month after a massive explosion. (CNS photo/Aziz Taher, Reuters)

RYE, N.Y. (CNS) — The Catholic Church in Lebanon plays a leading role in shaping public opinion in that troubled country because it is free and speaks the truth, Cardinal Bechara Rai, Maronite patriarch, told an internet audience Sept. 10.

“The church is free. The patriarch and the bishops are free and we say the truth as we see it. We are not looking for anything and this is why our word is heard and appreciated,” he said.

Cardinal Rai headlined the videoconference and offered a detailed description of the current situation in Lebanon and its prospects for the future.

“Lebanon, the last Christian foothold in the Middle East, is home for 18 Christian and Muslim confessional communities, living together equal in rights and duties. It is the only democratic secular state in the Arab world. It is an example of unity in diversity,” Cardinal Rai said.

“Lebanon is experiencing unprecedented economic, social and financial problems, and is facing, as a result, an existential danger like never before in its history,” he added.

The current problems include the coronavirus pandemic and the human and physical devastation caused by an Aug. 4 explosion at the port of Beirut that killed 200 people, injured 6,000 and left at least 300,000 homeless, Cardinal Rai said. These problems are exacerbated by decades of political and financial corruption.

“Due to the fast economic deterioration and the sociopolitical crises, the middle classes, the backbone of the population and the bedrock of a flourishing nation, are slipping sharply into poverty; more than half of the Lebanese population now lives below the poverty line,” Cardinal Rai said.

He said the presence of more than half a million Palestinian refugees and 1.5 million displaced Syrians has overburdened the country’s infrastructure and further taxed its ailing economy. The purchasing power of the national currency has decreased by 80% and many Lebanese have emigrated to find work in other countries.

The modern state of Lebanon was established in 1920. For almost 50 years, it maintained a position of active neutrality that contributed to its prosperity and earned it the nickname of “Switzerland of the Middle East,” Cardinal Rai said.

Lebanon started to decay and lost its neutrality after the 1969 Cairo Agreement was imposed on Lebanon, Cardinal Rai said. The agreement allowed Palestinians to fight Israelis through southern Lebanon, he said. He urged a return to the provisions of a 2002 Arab League accord that would restore Lebanon’s neutrality.

Under the Lebanese constitution, power is shared among Christians and Muslims.

“For us, dialogue between Christians and Muslims is the backbone of the existence of Lebanon,” Cardinal Rai said. The constitutional power-sharing is a formalized statement of a practice that existed before the constitution was adopted. Sharing and dialogue ensure coexistence of the two groups.

The practice of Christianity in Lebanon is unique in the Middle East. “In all the other Arab countries, Islam is the religion of the state and Christians are not given a chance to state their opinions. There is no such thing as freedom of conscience,” Cardinal Rai said.

“In Lebanon, Christians and Muslims live together in equality and we want to maintain this for the sake Christianity in the whole Arab world,” he said. It gives hope to Christians throughout the Middle East.

Cardinal Rai said the war on Iraq has destroyed Christianity in the Middle East. One and one-half million Christians lived in the region before the U.S.-led invasion of Iraq. One million Christians have been displaced, he said. Although some priests and bishops remain in the region, Christian schools, hospitals and universities are no longer operable.

“As a result, the impact of Christianity on society has disintegrated. That is why we are so keen on keeping Lebanon as a strong country,” Cardinal Rai said.

Mustapha Adib was appointed prime minister Aug. 31 after his predecessor and the entire government resigned in the wake of the deadly port explosion in Beirut. Cardinal Rai urged Adib to choose a small group of government ministers who are “independent, intelligent technocrats” capable of running the country without falling into old patterns of corruption.

Cardinal Rai said people are eager to know what the church recommends as Lebanon considers its future.

“The Maronite patriarch historically has been a national reference and not just a Maronite reference,” he said. “Lebanese politicians and the diplomatic corps await the sermon of the patriarch on Sunday to see what direction the church wants the country to go,” he explained.

In addition, the bishops of the country issue a monthly public communication that “has elements of politics and religion and the state of the country at large,” he said. “People wait to hear what the patriarch wants and what the bishops want and this creates public opinion,” he said

“The weakening of the Christian community in Lebanon would be a huge loss for the country, the Middle East and, indeed the world,” he said.

“Please do not let Lebanon fall into despair. Help us to restore it, once again, to that vibrant and flourishing religious, political and cultural model in the Middle East, so that it may be able to play its role and fulfill its own mission,” he concluded.

The hourlong event was organized by the Fordham Center on Religion and Culture in cooperation with Catholic Near East Welfare Association and Salt & Light Media.

Cardinal Timothy M. Dolan of New York is chairman of the board of the Catholic Near East Welfare Association, a pontifical organization that is delivering aid directly to the Lebanese people, without regard to religious affiliation.

In an introduction to the conference, Cardinal Dolan said Lebanon is a “beautiful laboratory” of religious freedom and diversity, and has become a light of hope to the world. It also has experienced the darkness and terror of war, turmoil, corruption and deep divisions.

Cardinal Dolan said Cardinal Rai is the voice that makes the most sense in Lebanon.