COVID-19 robbed refugees ‘of the little that they had,’ says Salesian 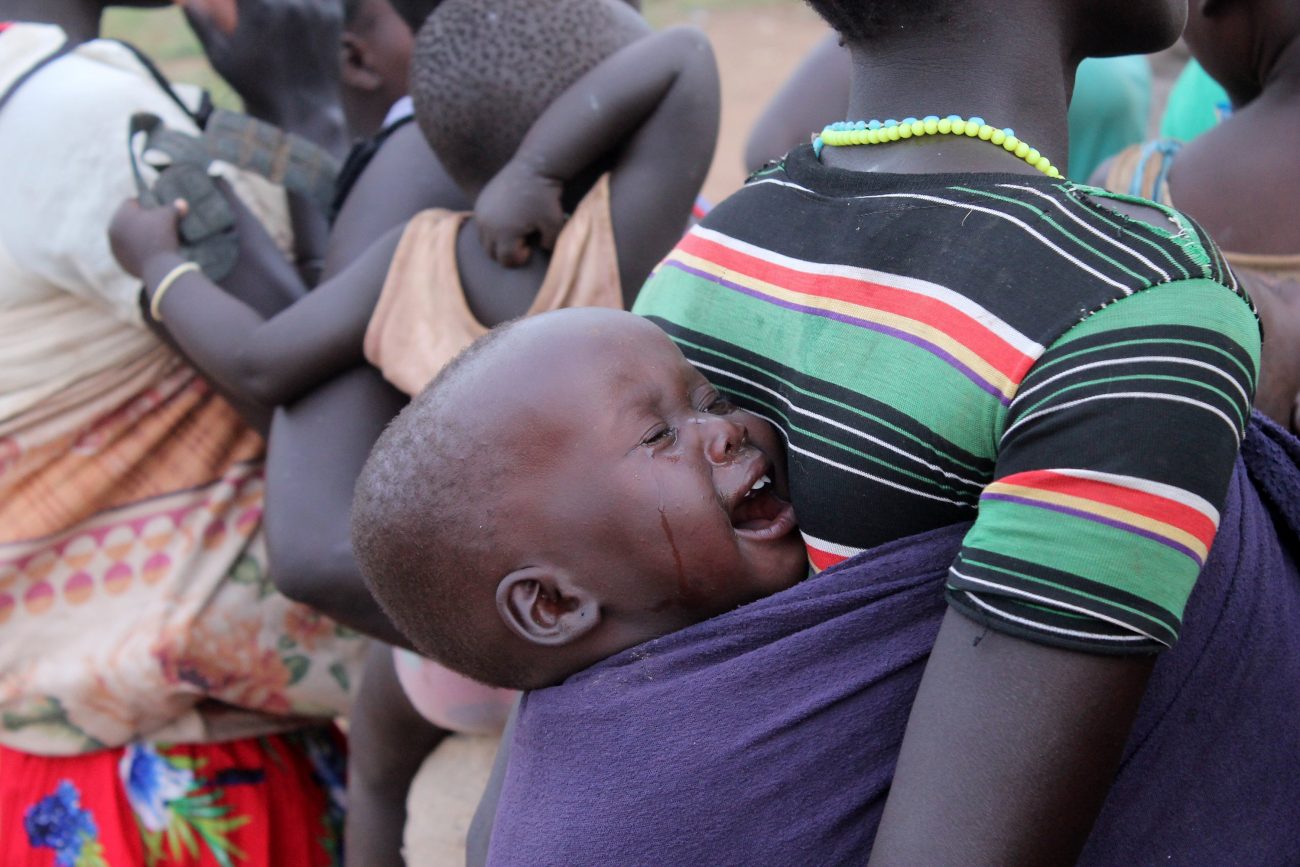 Adol Majo carries her crying baby in a wrap on her back as she waits in line for food aid in Palabek refugee camp in northern Uganda. More than 1.4 million refugees in the East African nation face severe hunger as COVID-19 worsens. (CNS photo/Tonny Onyulo)

PALABEK REFUGEE CAMP, Uganda (CNS) — Carrying her hungry baby on her back in the traditional African baby wrap, 38-year-old Adol Majok struggled in the long line of people waiting to get food rations and other essential items distributed by Catholic groups.

“My children are starving. They haven’t eaten anything for the last three days,” said Majok, a single mother of three sons and two daughters. “They are going to die unless I get them food to eat.”

Majok arrived at Palabek three years ago after her husband was killed during fighting in Pajok, a town in South Sudan. She lost everything in the violence and had no source of income.

After a few months at the camp that hosts around 46,000 refugees, mostly from South Sudan, Majok opened a small tea stall business to support her family. She sold bread, biscuits, roasted peanuts, cakes and other food besides her tea.

However, her life changed again the minute the government announced the first confirmed coronavirus case in the country. Her list of clients, mostly refugees, quickly dwindled as the government shut down markets and social gatherings aimed at slowing the spread of virus.

“They stopped to buy tea and foodstuffs the way they used to before,” she said, while fighting back tears. “My sufferings started. I had to close my business and as a result I lacked something to eat with my children. I now depend on aid.”

Majok is among 1.4 million refugees in Uganda facing hunger because of aid disruption, loss of income and rising food prices linked to the COVID-19 crisis. The U.N. Refugee Agency warns that unless urgent action is taken to address the situation, levels of acute malnutrition, stunting and anemia are expected to rise, especially among children.

But Catholic groups are trying to fill that gap, making an effort to help those in need with food, clothing and other supplies. International development agencies and local dioceses are working to deliver flour, soap, beans, sugar and cooking oil to deliver to families in more than 14 refugee camps across Uganda.

The Salesians of Don Bosco in Palabek are helping refugees with food, clothing and other essential goods.

“Refugees who are among vulnerable groups should be remembered because COVID-19 robbed them of the little that they had,” said Salesian Father Lazar Arasu, director of Don Bosco Palabek Refugee Services. “They are suffering because they are the worst hit by the pandemic. The food ration has reduced because of lockdown. But we are trying our best to help them with everything during this hard time.”

The Salesians are also providing certified seeds, fertilizers and farming support to refugees to help them mitigate food shortage amid the pandemic. The Indian-born priest said his agency has given farmers several kilos of beans, corn, peanuts and a range of vegetable seeds.

“We are now slowly finding solutions to empower refugees to be self-sufficient through the cultivation of food,” said Father Arasu, who is among the five Salesian missionaries living and working in Palabek camp. “We have hired land for them from the local Ugandan neighbors so that they can grow food and fend for themselves.”

Catechist Peter Jok, a South Sudanese refugee, said they have been distributing face masks, soap and sanitizers in an effort to help refugees protect themselves against the virus that has already infected more than 31.4 million people worldwide.

Uganda, a nation of 42 million people, has recorded just over 6,700 cases and just over 60 deaths since March. According to a statement by the U.N. High Commissioner for Refugees, 94 refugees and humanitarian workers at Kyangwali, one of the refugee camps in northern Uganda, have tested positive for the virus that causes the COVID-19 disease, and two refugees have died.

“We are all worried because we don’t want any refugee to contract the virus here. It will be devastating,” said Jok, who works in Palabek camp. “We are encouraging them to keep the social distancing and observe the set government guidelines to fight the virus. The church has also ensured they access all the services entitled to them, including food, water and health care.”

Father Arasu noted that the economic hardship caused by the pandemic might further exacerbate mental health conditions in refugee populations. The Salesians have been providing information, counseling and psychosocial support to vulnerable refugees in the camp.

“Refugees need our support and prayers all the time. They have experienced a lot. Many have been tortured, lost their loved ones, lost properties and even (been) raped,” said Father Arasu, who has ministered in Uganda for more than two decades. “We are offering pastoral care and counseling to refugees during the pandemic to make them feel wanted.”

Deng Ajiing is one of the beneficiaries of the counseling services offered by the Salesians during the pandemic. She fled the war in 2017 in Pajok with her young baby after her husband was killed and her daughter raped and killed by soldiers in her presence.

She has been recovering from trauma, but the pandemic exacerbated her situation. After sleeping hungry for four days, Ajiing went into depression and thought of committing suicide. However, she was rescued by the Salesians.

“Things are really bad. I thought of dying and joining my husband and daughter. I thought there was no reason to live. I was sleeping hungry every day with my baby,” she said. “But I thank those people who offered me food and emotional support during this period of pandemic.”

Meanwhile, Majok said, “We cannot go out to look for food or do business because of lockdown and fear of contracting the virus. If we don’t get food, hunger will kill us.”

PREVIOUS: True change requires input of everyone, not just the powerful, pope says