True change requires input of everyone, not just the powerful, pope says 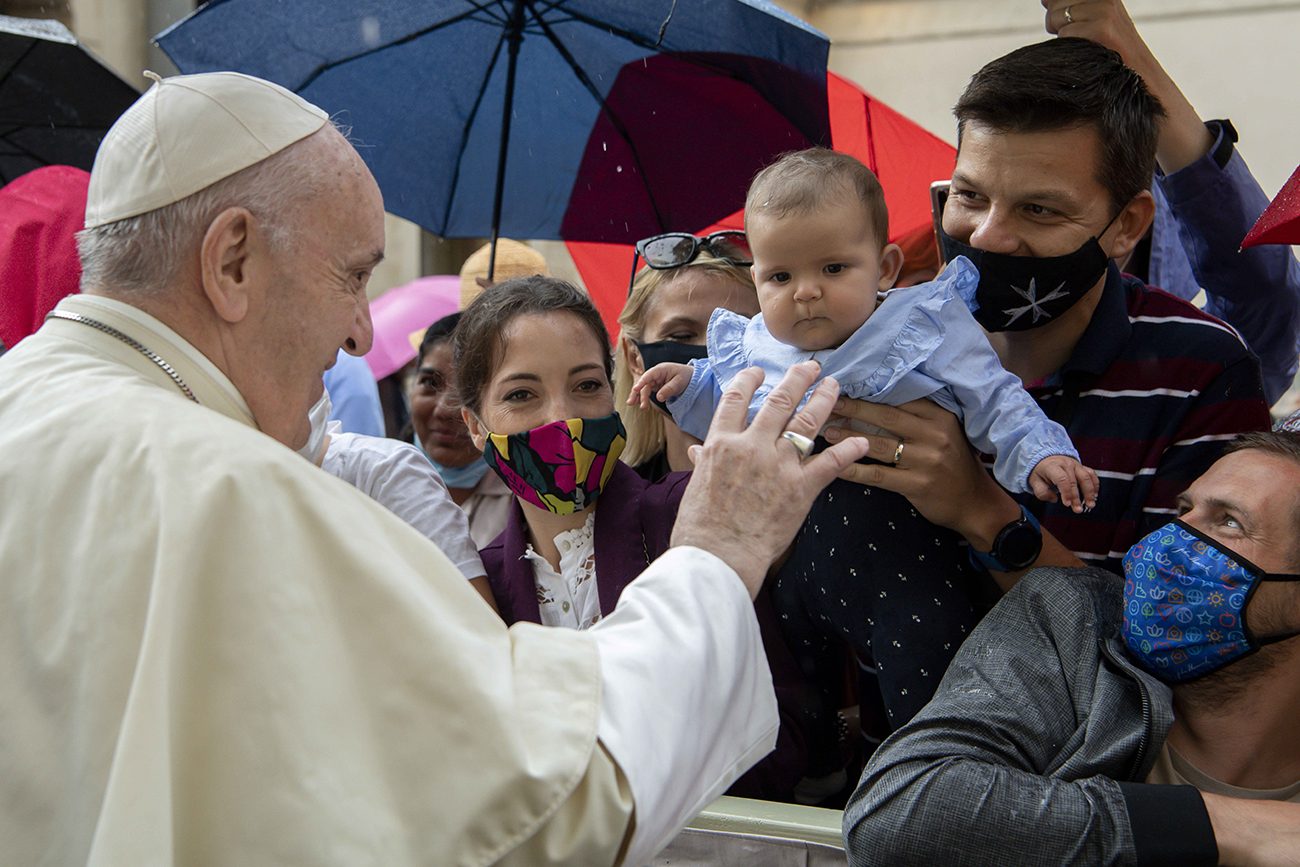 VATICAN CITY (CNS) — The world will not overcome the current crisis if only big businesses, financial institutions and the powerful have a voice, Pope Francis said.

“Everyone must be listened to. Everyone — those on the top, those on the bottom,” he said Sept. 23 during his weekly general audience.

“Getting out of this crisis does not mean brushing a coat of paint over the current situation,” he said.

“Overcoming a crisis means changing. And true change comes about with everyone, all the people,” who make up a community, he said to applause.

“Either together or it will not work,” he said at the audience, which was held in the San Damaso courtyard of the Apostolic Palace.

He continued his series of talks on “healing the world” by reflecting on the “principle of subsidiarity,” which emerged in church teaching in Pope Pius XI’s 1931 encyclical “Quadragesimo Anno” on the reconstruction of the social order.

Subsidiarity has been explained as balancing the many necessary levels of society — government, business, family, associations, etc. — and seeking the allocation of resources by higher levels of society to support engagement and decision-making by the lower levels.

Pope Francis said the principle works both ways: from top to bottom and from the bottom to the top, with all levels working in a cooperative, not competitive way, leading to greater unity and working for the common good.

Unfortunately, he said, not everyone has the possibility, the right, the resources or the courage to take on their responsibility in helping heal the world.

“Many people cannot participate in the reconstruction of the common good because they are marginalized, excluded or ignored; certain social groups do not succeed in making a contribution because they are economically or socially suffocated,” he said.

In some places, people are not free to express their own faith or values and could even go to prison if they did and, especially in Western nations, “many people repress their own ethical or religious convictions.”

“Unfortunately, this injustice happens often in those places where huge economic and geopolitical interests are concentrated, such as, for example, certain extractive activities in some areas of the planet” and where the voices of indigenous peoples, their culture and worldviews are not taken into consideration.

“Today, this lack of respect for the principle of subsidiarity has spread like a virus,” the pope said.

Also, when it comes to finding a vaccine for the coronavirus, he added, “the large pharmaceutical companies are listened to more than the health care workers employed on the front lines in hospitals or in refugee camps.”

The pope recalled “the spontaneous gesture of applauding for doctors and nurses” during the lockdown in Italy and other countries, as a sign of encouragement and hope.

“Let’s extend this applause to every member of the social body for their precious contribution, no matter how small,” and make sure they are listened to, consulted and given a chance to do something, he said.

“Let’s applaud those this culture characterizes as the rejected: the elderly, children, persons with disability, workers, all those who dedicate themselves to service,” he said, and let them collaborate to overcome this crisis.

People should not be content just with applauding, though, he said. “Let’s encourage ourselves to dream big … seeking the ideals of justice and social love that are born of hope” rather than trying to reconstruct a past that was “unjust and already ill.”

At the end of the audience, Pope Francis blessed a large bell that was commissioned by the “Yes to Life” Foundation in Poland.

The bell, called “The voice of the unborn,” was to be used at events recognizing the value of human life from its moment of conception to its natural end, the pope said in remarks to visitors from Poland.

May the tolling of the bell, “reawaken the consciences of lawmakers and all people of goodwill in Poland and the world,” he said.

NEXT: COVID-19 robbed refugees ‘of the little that they had,’ says Salesian