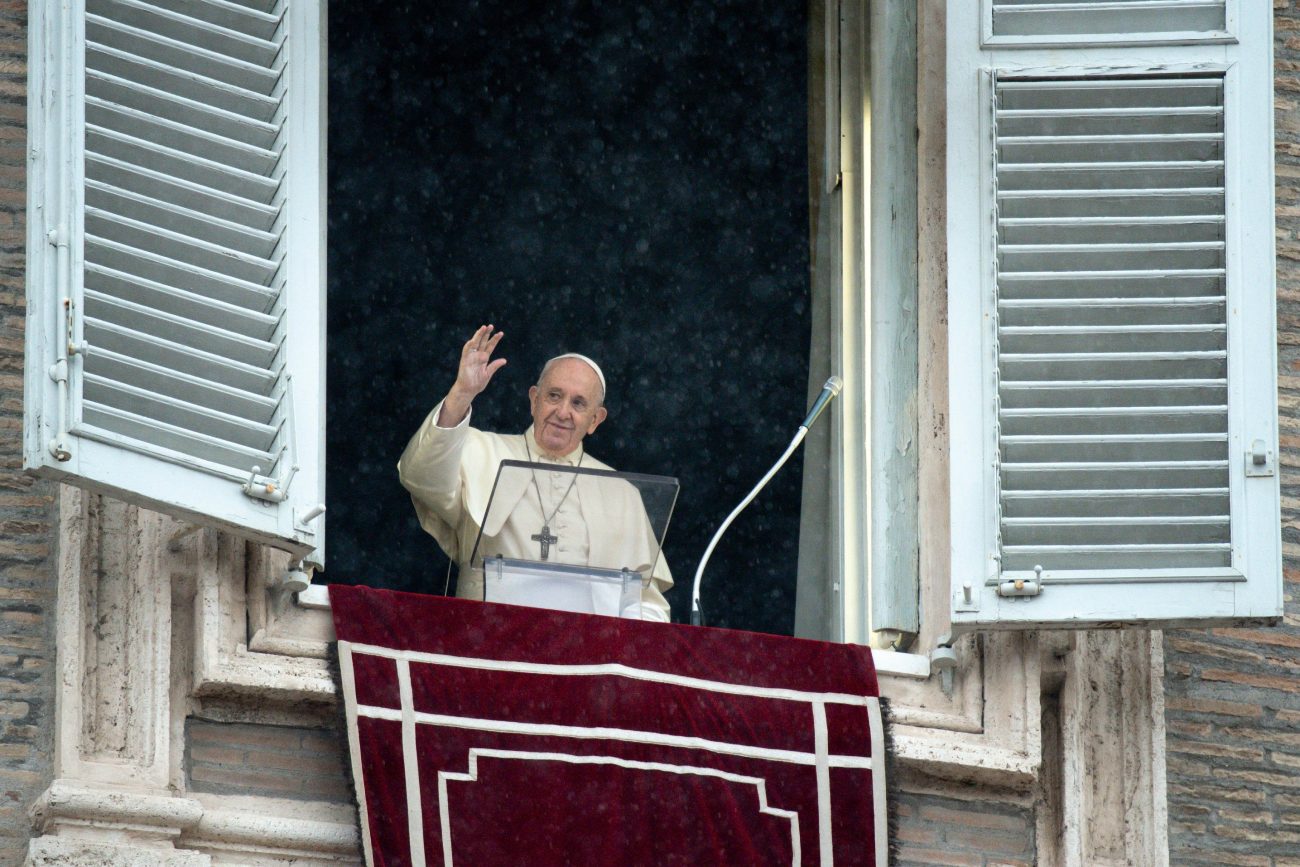 Rain falls as Pope Francis leads the Angelus from the window of his studio overlooking St. Peter's Square at the Vatican Sept. 27, 2020. (CNS photo/Vatican Media)

VATICAN CITY (CNS) — Pope Francis called for the use of dialogue — not weapons — for resolving the problems and conflict escalating in the Caucasus region.

“I pray for peace in the Caucasus and I ask the parties in the conflict to make concrete gestures of goodwill and fraternity that can lead to the resolution of problems, not with the use of force and weapons, but through dialogue and negotiations,” he said.

The pope made his remarks after praying with visitors in St. Peter’s Square for his Sunday Angelus address Sept. 27. He asked the visitors to again “pray together, in silence, for peace in the Caucasus.”

He said he was following the “worrying reports about clashes” in the Caucasus region, which has seen escalating conflict between Armenia and Azerbaijan in the long-disputed breakaway Nagorno-Karabakh region.

A fresh series of clashes erupted Sept. 27, leaving at least 31 people dead, and the fighting continued Sept. 28 with at least 15 more casualties being reported so far.

Armenia and Azerbaijan have had an undeclared war over the territory since 1988; about 30,000 people have died in the fighting and even more people have been displaced.

After the fall of the Soviet Union, the Nagorno-Karabakh region, which has an Armenian ethnic majority, proclaimed itself an independent state, leading to years of conflict and a broken cease-fire agreement.

Armenian Apostolic Catholicos Karekin II was in Rome and met briefly Pope Francis Sept. 27, the Vatican said, but the Orthodox leader’s visit to Rome was cut short, according to AsiaNews.

Catholicos Karekin said he was returning to his country to be close to his people at this critical time, reported the Rome-based missionary news agency.

After praying the Angelus, Pope Francis also highlighted the World Day for Migrants and Refugees, which the church celebrated Sept. 27.

The theme the pope chose for 2020 was “Forced like Jesus Christ to flee,” focusing on people displaced within the borders of their own country. The pope asked that people remember and pray for those who are forced to flee or migrate as well as for all those who come to their assistance.

Pope Francis also gave his support and encouragement to all those who work in the tourism sector, which has been hit hard by the coronavirus pandemic.

Sept. 27 marked the United Nations’ celebration of World Tourism Day. The U.N. World Tourism Organization estimates that international tourism could plummet by 60% or even 80% over the course of the year, putting millions of jobs at risk.

Pope Francis recognized the difficulties being faced by so many countries and he expressed his “encouragement to all those working in tourism, especially small family operations and young people.”

“I hope that everyone may soon recover from the current difficulties,” he said.

And lastly, the pope prayed for those dedicated to the fight against breast cancer.

He greeted a group of women in the square, giving a special mention to them and all those working in this fight. “May the Lord sustain your commitment,” he said.

PREVIOUS: Pope to U.N.: Respect for each human life is essential for peace, equality