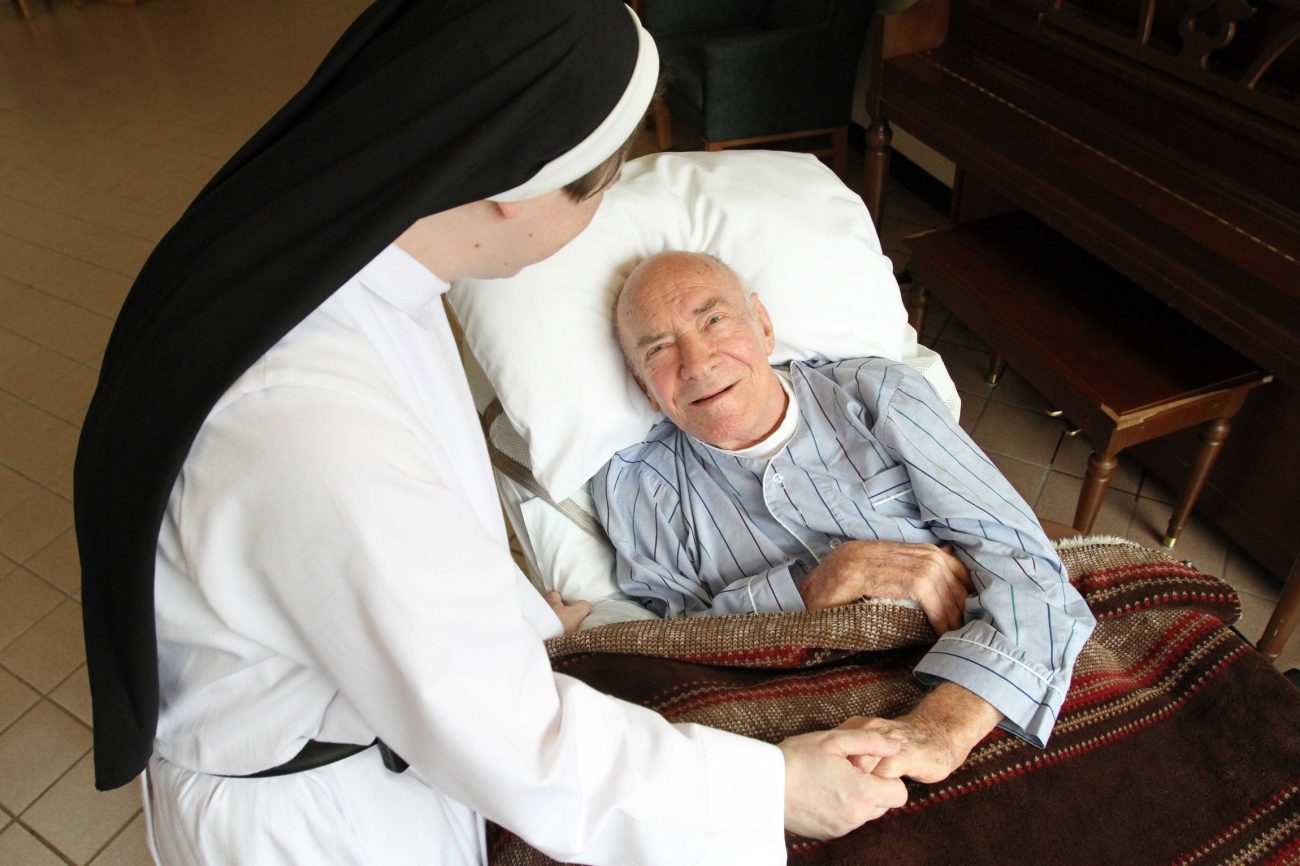 A patient is pictured in a file photo chatting with a nun at Rosary Hill Home, a Dominican-run facility in Hawthorne, N.Y., that provides palliative care to people with incurable cancer and have financial need. (CNS photo/Gregory A. Shemitz)

VATICAN CITY (CNS) — With the legalization of assisted suicide and euthanasia in many countries, and questions concerning what is morally permissible regarding end-of-life care, the Vatican’s doctrinal office released a 25-page letter offering “a moral and practical clarification” on the care of vulnerable patients.

“The church is convinced of the necessity to reaffirm as definitive teaching that euthanasia is a crime against human life because, in this act, one chooses directly to cause the death of another innocent human being,” the document said.

Titled “Samaritanus Bonus: On the Care of Persons in the Critical and Terminal Phases of Life,” the letter by the Congregation for the Doctrine of the Faith was approved by Pope Francis in June, and released to the public Sept. 22.

A new, “systematic pronouncement by the Holy See” was deemed necessary given a growing, global trend in legalizing euthanasia and assisted suicide, and changing attitudes and rules that harm the dignity of vulnerable patients, Cardinal Luis Ladaria, congregation prefect, said at a Vatican news conference Sept. 22.

It was also necessary to reaffirm church teaching regarding the administration of the sacraments to and pastoral care of patients who expressly request a medical end to their life, he said.

“In order to receive absolution in the sacrament of penance, as well as with the anointing of the sick and the viaticum,” he said, the patients must demonstrate their intention to reverse their decision to end their life and to cancel their registration with any group appointed to grant their desire for euthanasia or assisted suicide.

In the letter’s section on “Pastoral discernment toward those who request euthanasia or assisted suicide,” it said a “priest could administer the sacraments to an unconscious person ‘sub condicione’ if, on the basis of some signal given by the patient beforehand, he can presume his or her repentance.”

The church’s ministers can still accompany patients who have made these end-of-life directives, it added, by showing “a willingness to listen and to help, together with a deeper explanation of the nature of the sacrament, in order to provide the opportunity to desire and choose the sacrament up to the last moment.”

It is important to carefully look for “adequate signs of conversion, so that the faithful can reasonably ask for the reception of the sacraments. To delay absolution is a medicinal act of the church, intended not to condemn, but to lead the sinner to conversion,” it said.

However, it added, “those who spiritually assist these persons should avoid any gesture, such as remaining until the euthanasia is performed, that could be interpreted as approval of this action.”

Chaplains, too, must show care “in the health care systems where euthanasia is practiced, for they must not give scandal by behaving in a manner that makes them complicit in the termination of human life,” the letter said.

Another warning in the letter regarded medical end-of-life protocols, such as “do not resuscitate orders” or “physician orders for life-sustaining treatment” and any of their variations.

These protocols “were initially thought of as instruments to avoid aggressive medical treatment in the terminal phases of life. Today, these protocols cause serious problems regarding the duty to protect the life of patients in the most critical stages of sickness,” it said.

On the one hand, it said, “medical staff feel increasingly bound by the self-determination expressed in patient declarations that deprive physicians of their freedom and duty to safeguard life even where they could do so.”

“On the other hand, in some health care settings, concerns have recently arisen about the widely reported abuse of such protocols viewed in a euthanistic perspective with the result that neither patients nor families are consulted in final decisions about care,” it said.

“This happens above all in the countries where, with the legalization of euthanasia, wide margins of ambiguity are left open in end-of-life law regarding the meaning of obligations to provide care.”

The church, however, “is obliged to intervene in order to exclude once again all ambiguity in the teaching of the magisterium concerning euthanasia and assisted suicide, even where these practices have been legalized,” it said.

Euthanasia involves “an action or an omission which of itself or by intention causes death, in order that all pain may in this way be eliminated.”

Its definition depends on “the intention of the will and in the methods used,” it added.

The letter reaffirmed that “any formal or immediate material cooperation in such an act is a grave sin against human life,” making euthanasia “an act of homicide that no end can justify and that does not tolerate any form of complicity or active or passive collaboration.”

For that reason, “those who approve laws of euthanasia and assisted suicide, therefore, become accomplices of a grave sin that others will execute. They are also guilty of scandal because by such laws they contribute to the distortion of conscience, even among the faithful.”

The letter also underlined a patient’s right to decline aggressive medical treatment and “die with the greatest possible serenity and with one’s proper human and Christian dignity intact” when approaching the natural end of life.

“The renunciation of treatments that would only provide a precarious and painful prolongation of life can also mean respect for the will of the dying person as expressed in advanced directives for treatment, excluding however every act of a euthanistic or suicidal nature,” it said.

However, it also underlined the rights of physicians as never being “a mere executor of the will of patients or their legal representatives, but retains the right and obligation to withdraw at will from any course of action contrary to the moral good discerned by conscience.”

Other aspects of end-of-life care the letter detailed included: the obligation to provide basic care of nutrition and hydration; the need for holistic palliative care; support for families and hospice care; the required accompaniment and care for unborn and newly-born children diagnosed with a terminal disease; the use of “deep palliative sedation”; obligation of care for patients in a “vegetative state” or with minimal consciousness; and conscientious objection by health care workers.

The full text of “Samaritanus Bonus: On the Care of Persons in the Critical and Terminal Phases of Life” can be found on the Vatican’s website in English and in Spanish.

PREVIOUS: Pope: Coronavirus vaccine must be for all, not just the wealthy

NEXT: Quebec government limits churches to 50 people, 25 in riskier regions