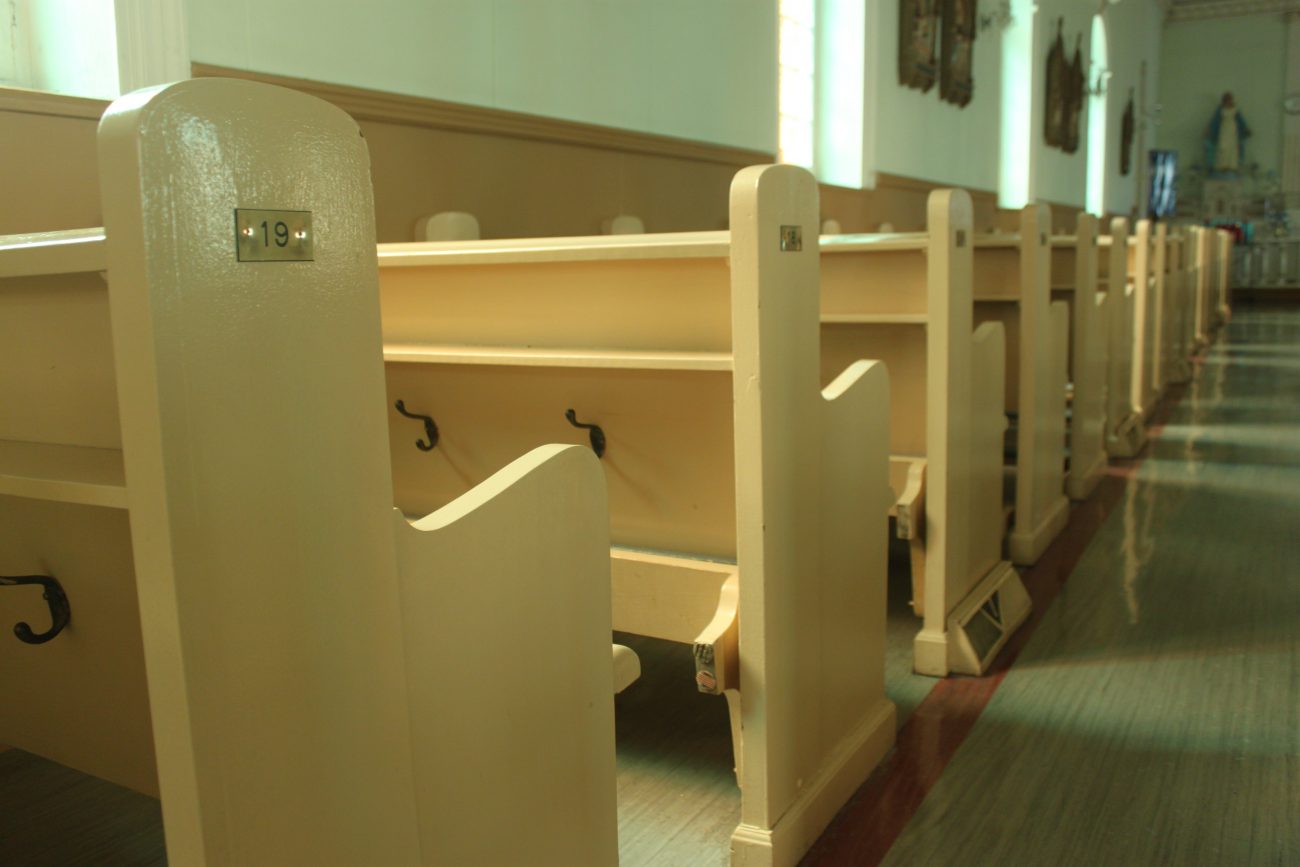 Empty pews are pictured in a file photo at St. Irenee's Catholic church in the Charlevoix region, near Quebec City. During the COVID-19 pandemic, the Quebec government is limiting churches to 50 people inside, 25 in riskier regions. (CNS photo/Philippe Vaillancourt, Presence)

MONTREAL (CNS) — The Quebec government took religious leaders by surprise by announcing Sept. 20 that the maximum number of people allowed to participate in an event in a place of worship would be lowered from 250 to 50 in all regions of the province, starting Sept. 21.

But the Quebec government also announced that three regions, including Montreal and Quebec City, moved from “yellow” to “orange” on the COVID-19 alert scale. In these regions, places of worship are now allowed to accommodate only 25 people instead of 250. This measure will be adjusted when these regions move back from orange to yellow.

Christian Dube, minister of health and social services, said that because of the spread of COVID-19, Quebec health authorities have had to “permanently adjust, regardless of the alert level” a previously adopted measure.

“For gatherings taking place in rented rooms, places of worship, festive events, weddings, BBQs, picnics, it will now be a maximum of 50 people,” he said at a news conference in Montreal.

Bishop Pierre Goudreault of Sainte-Anne-de-la-Pocatiere reacted to the announcement with “incomprehension, disappointment and indignation.”

“I would like to recall that no outbreak of the coronavirus has occurred from a Catholic church. Why restrict gatherings there when the participants in Masses are exemplary in their way of respecting and practicing sanitary measures?” he asked.

“The government once again placed places of worship and bars in the same category,” said the Interreligious Table, a consultation body created during last spring’s lockdown that brings together Christians, Muslims and Jews, including Catholic bishops.

These past months, religious people “have spared no effort to try to engage in a frank and open dialogue with government authorities in a spirit of collaboration,” said Bishop Christian Rodembourg of Saint-Hyacinthe, spokesman for the Interreligious Table.

“Letters have not even been acknowledged, while unanswered phone calls and emails have become uncountable,” said the bishop, who is also president of the Assembly of Catholic Bishops of Quebec. “This situation is disappointing and unacceptable.”

The Table demands that the government “reclassify places of worship” in the same category as theaters, cinemas and concert halls immediately. This would allow places of worship to continue to accommodate up to 250 people instead of being limited to 25 or 50.

“We also ask that a frank and open channel of communication be established between us and the government authorities. We are not asking for a privilege. We present ourselves as partners and simply wish to be considered fairly by the government,” said Bishop Rodembourg.

In Quebec City, Cardinal Gerald Lacroix said he was “very surprised” by the announcement. “Please, review it,” he also told government officials.

“It’s not fair,” he said, pointing out how the news was received with dismay by families who are preparing for a wedding or a funeral.

He said he hopes to see more respect from for religious groups by the provincial government.

The cardinal said he is concerned about the disastrous impact that such a decision could have on the finances of Catholic churches — already weakened by the health crisis and lockdown — that rely largely on donations from the faithful for their finances.

With a limit of 25 people inside a church, “it’s impossible to survive,” he said. “We are very, very concerned about that.”

Contributing to this story was Philippe Vaillancourt.

Gloutnay is a reporter for Presence info in Montreal. Vaillancourt is editor.

NEXT: Cardinal says he has ‘unpleasant’ job of disciplining theologians