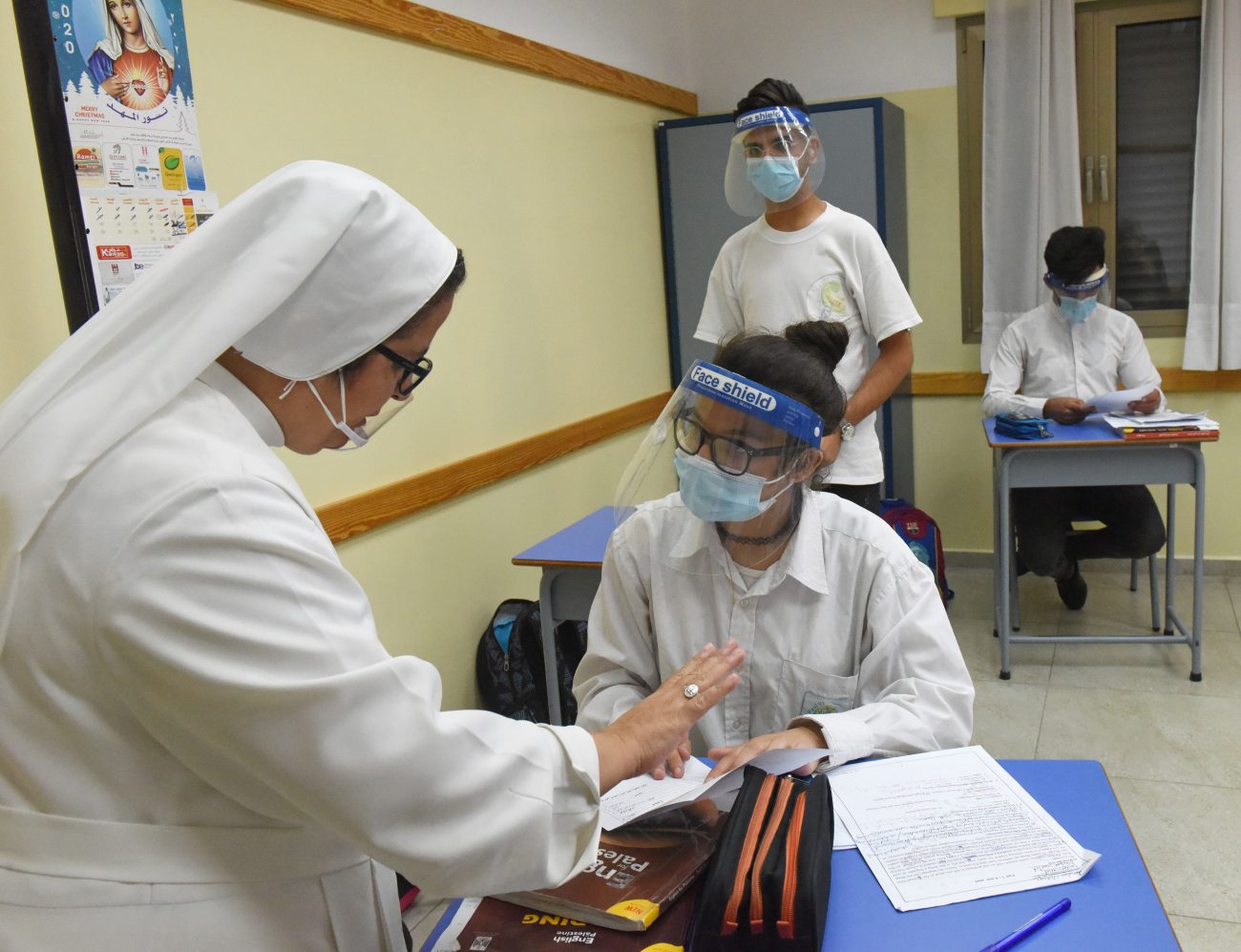 Sister Lara Hijazin, director of the Ephpheta Institute for the Deaf, speaks to a student wearing a protective visor and mouth guard in Bethlehem, West Bank, Sept. 15, 2020. The visors and plastic mouth covers were made so the students can read lips and be protected from COVID-19. (CNS photo/Debbie Hill)

JERUSALEM (CNS) — Catholic leaders in the Holy Land expressed astonishment that a large group of evangelical Christians from the U.S. received visas to come to Israel to help with the grape harvest in West Bank settlements, while Catholic institutions have not been able to obtain Israeli visas for their volunteers and staff members because of the COVID-19 pandemic.

“The refusal to grant visas is jeopardizing the work of the Christian communities, especially the institutions that serve the neediest,” they said in a Sept. 10 statement.

Catholic institutions and religious communities requesting visas for their volunteers have been told numerous times that visas could not be issued because of COVID-19, they said. Israel has banned most non-Israelis from entering the country since the start of the COVID-19 pandemic earlier this year.

However, a Sept. 8 report in the Israeli daily Ha’aretz newspaper said some 70 volunteers from the Missouri-based Hayovel Volunteer in Israel organization were given visas so they could come to Israel and pick grapes for settler-owned wineries during the grape harvest season. The harvest season usually runs from August to October.

The volunteers were given a three-month visa and completed a 14-day quarantine before beginning work on the harvest at the Har Bracha settlement near Nablus, according to the paper.

The church statement noted that many Catholic-administered hospitals, schools, homes for the elderly and the handicapped, clinics and social centers in Israel depend heavily on volunteers who come from Catholic communities around the world, especially from the U.S. and Europe.

Many of the institutions such as St. Louis Hospital, which provides end-of-life care, and the Sisters of Charity home for the severely handicapped — both in Jerusalem — serve Muslims and Jews as well as Christians, the statement noted.

An administrator at the Sisters of Charity home for the severely handicapped in the Ein Kerem neighborhood of Jerusalem said they were short-handed on staff to care for the children and felt this acutely because they were abnormally busy preparing for the upcoming government-imposed three-week lockdown, set to go into effect Sept. 18 at the onset of Rosh Hashana, the Jewish new year holiday.

In Bethlehem, West Bank, Sister Lara Hijazin, director of the Ephpheta Institute for the Deaf and a member of the Sisters of St. Dorothy, said their volunteers from Italy have been unable to come since March because they have not been given visas.

The Ephpheta boarding school section has been closed since the outbreak of the pandemic, said Sister Hijazin, so the local staff is managing with the basic learning needs of the students despite the loss of the volunteers. But, she said, the students are not being given the extra activities in sports and English, which expand their capabilities and outlook.

“The volunteers come, giving new directions, opening the minds of people here. If the volunteers come we have more help for our students for other activities, and they assist the teachers,” said Sister Hijazin. “When there are no volunteers, these activities are stopped.”

The church leaders asked that visas be granted to volunteers “that sacrifice periods of their lives” to work in Catholic institutions of the Holy Land and to members of religious congregations who want to join their religious communities in the Holy Land “in lives of prayer and service.”

They also requested that new students of various Catholic academic institutions in the Holy Land be afforded visas as well, especially after it was announced that foreign students registered to study in programs of Jewish Israeli institutions can receive visas.

“The Catholic Church of the Holy Land seeks to play its role in helping to build a society in which all have their place,” the leaders said. “We also ask — insist — that Christians and their institutions enjoy the same rights as all others in the state of Israel. … We ask again that visas be granted to those whose presence in the Holy Land is a necessity for the life of the church.”

PREVIOUS: Creation must be protected, not exploited, pope says at audience

NEXT: By the numbers: Statistics illustrate progress in tribunal reforms