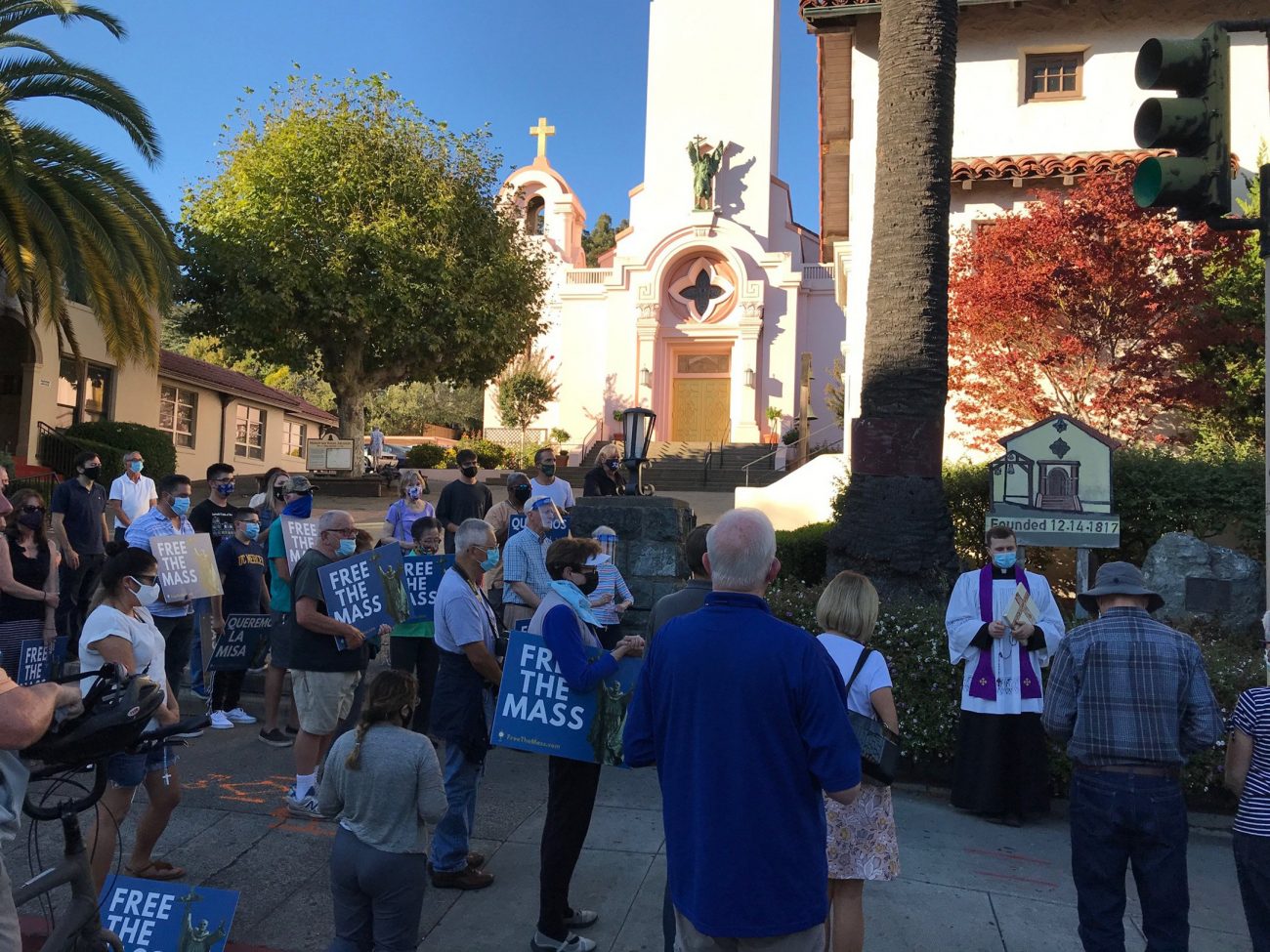 People in San Rafael, Calif., gather in front of Mission San Raphael to pray the rosary Oct. 13, 2020, after vandals tore down a statue of St. Junipero Serra there the day before. (CNS photo/courtesy Archdiocese of San Francisco)

Just the saint’s feet are left after the statue on church property was vandalized and desecrated Oct. 12 by what Archbishop Salvatore J. Cordileone described as a “small, violent mob,” who he hopes will be prosecuted for attacking the statue.

The vandalism took place Oct. 12 — Columbus Day, or Indigenous Peoples Day as the holiday is now called in some cities and states, including California — during what was at first a peaceful protest held at St. Rafael Mission Church, the archbishop said, but then some participants became violent and destroyed the statue.

“Once again, this time at St. Raphael Parish, a statue of St. Junipero Serra was mindlessly defaced and toppled by a small, violent mob,” Archbishop Cordileone said in an Oct. 13 statement. “This kind of behavior has no place in any civilized society.”

He said the police arrested five “of the perpetrators,” but “what happens next is crucial.”

“If these are treated as small property crimes, it misses the point: The symbols of our faith are now under attack not only on public property, but now on our own property and even inside of our churches,” he said. “We cannot allow a small unelected group of lawbreakers to decide what sacred symbols we Catholics or other believers may display and use to foster our faith. This must stop.”

“There is no question that the indigenous peoples of our continent suffered under Europeans who came here and their descendants, especially after the mission era ended and California entered into the United States,” Archbishop Cordileone added. “But Father Serra is the wrong symbol of those who wish to address or redress this grievance.” 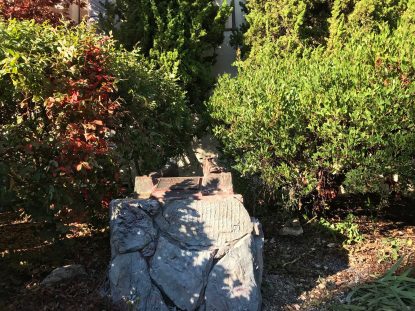 The base of what was a St. Junipero Serra statue is seen in front of Mission San Raphael in San Rafael, Calif., after vandals tore down the statue Oct. 12, 2020. (CNS photo/courtesy Archdiocese of San Francisco)

Known for spreading the Gospel in the New World during the 18th century, Father Serra was a Franciscan friar who arrived in Mexico from Spain. He made his way on foot up the coast of Mexico and to California, where he established a chain of missions that are now the names of well-known cities such as San Diego, San Francisco and Santa Barbara.

He was the first president of the California mission system, and personally founded nine of the state’s 21 missions. It is estimated that during his ministry, St. Junipero Serra baptized about 6,000 native people.

In 2015, some people objected to his canonization, like critics of his beatification in 1988, because of questions raised about how Father Serra allegedly treated the native peoples of California and about the impact of Spanish colonization on native peoples throughout the Americas.

In recent years, activists also have attacked the legacy of Christopher Columbus, saying he should not be honored with a federal holiday or with statues; over the summer a number of Columbus statues also were desecrated.

The renaming the holiday as Indigenous Peoples Day by various localities was done in recognition of the indigenous populations displaced after Columbus’ arrival in the Americas in 1492 and the European exploration and colonization that followed.

“Father Serra and his fellow Franciscans renounced all worldly pursuits to give their lives to serving the native peoples and so protected them from the abuses of their fellow Spaniards,” Archbishop Cordileone said.

“To look to Father Serra as the icon of oppression of the Indians,” he remarked, “is akin to doing the same with Abraham Lincoln and the institution of slavery in the United States.”

He acknowledged that “there are deep, lingering scars from this oppression that need to be healed, but vilifying a great man who sacrificed to protect the rights of the oppressed is not how we achieve this.”

“Recognition of the truth must necessarily precede healing and reconciliation. Attacking the symbols of faith of millions of Catholics, who are as diverse in ethnicity as any faith in America, is counterproductive,” he added. “It’s also simply wrong.”

This past summer, a statue of St. Junipero Serra in the city’s Golden Gate Park was toppled, and in response Archbishop Cordileone, joined by several dozen people, led the rosary June 27 and recited the prayer of St. Michael the Archangel for protection from evil at the site of the now-toppled statue.

In Sacramento, a Serra statue on the grounds of the California Capitol in Capitol Park was torn down by a group of demonstrators late July 4.

The desecration of these statues is part of a wave of attacks on Catholic churches and statues around the country in the past several months.

NEXT: Pandemic battle should inspire fight for life in all forms, archbishop says