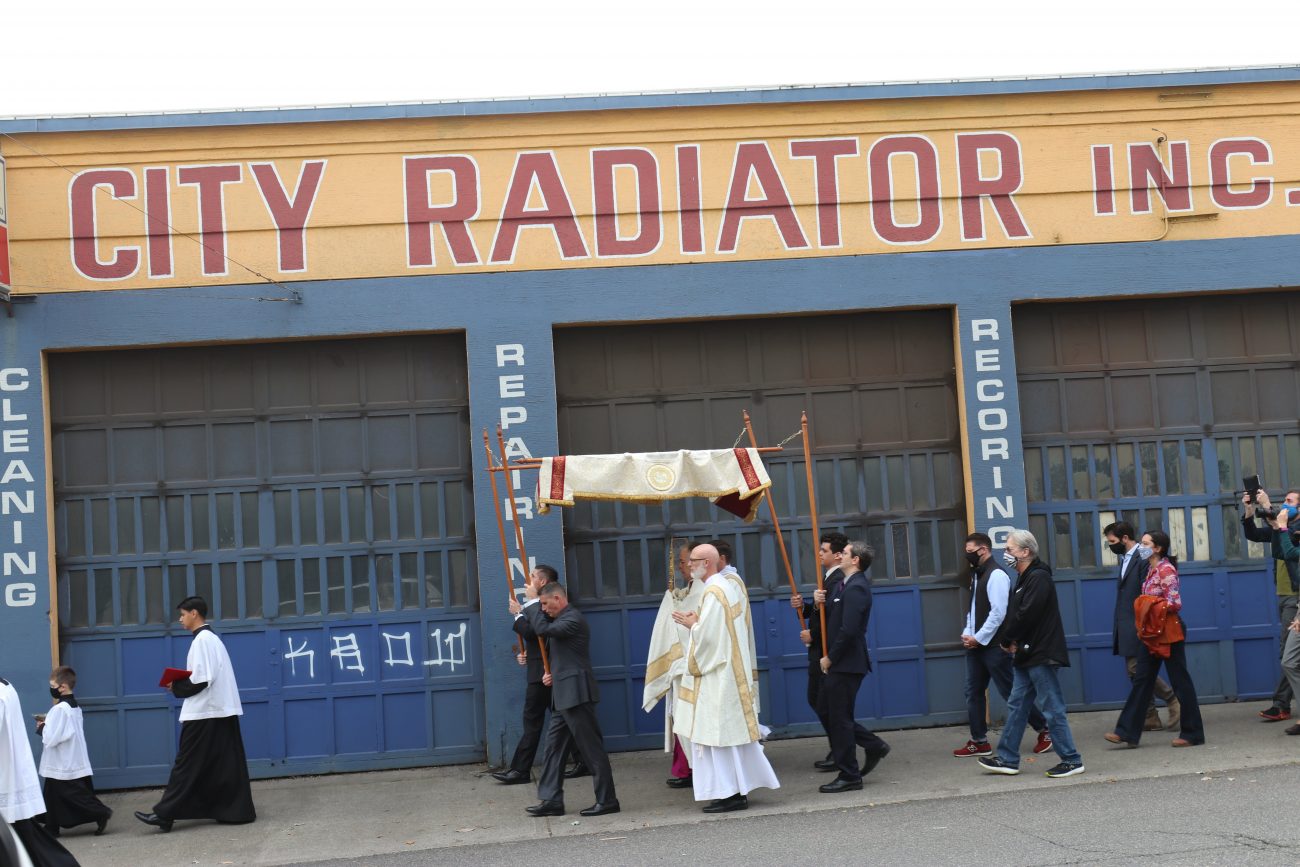 Archbishop Alexander K. Sample of Portland, Ore., carries the Eucharist and leads a process down the street Oct. 17, 2020, on the way to a rosary and exorcism ceremony for peace and justice in Portland. (CNS photo/Ed Langlois, Catholic Sentinel)

Out of the corner of his eye, he saw 225 people walking in procession behind the Eucharist on busy Northwest Everett Street. Hulsey paused for a moment, went to the window and gazed with folded hands, purple surgical gloves and all.

“I’m not Catholic,” he said. “I just recently found God.”

What Hulsey had witnessed was a morning procession from St. Mary’s Cathedral of the Immaculate Conception to a city park where Portland Archbishop Alexander K. Sample offered a rosary for peace and conducted an exorcism for a city that has witnessed peaceful racial justice protests peppered with riots for more than four months.

“There is no better time than in the wake of civil unrest and the eve of the elections to come together in prayer, especially here in Portland,” Archbishop Sample said before the procession.

“The Catholic Church takes the promotion of unity, and accordingly peace, as belonging to the innermost nature of the church,” he said. “For this reason, the church fosters solidarity among peoples, and calls peoples and nations to sacrifices of advantages of power and wealth for the sake of solidarity of the human family.”

Catholics across western Oregon took part in the morning prayers Oct. 17 via livestream. There were almost 8,000 views on Facebook.

“Mary, your son is the Prince of Peace,” the archbishop said as he knelt before the Blessed Sacrament, placed on an altar under spreading elm trees. “Through your intercession, may he bring peace to our cities and our communities, may his peace reign in our hearts.” Prayers were offered in English, Latin, Spanish, Vietnamese and Tagalog.

The archbishop conducted a Latin exorcism rite meant to cleanse a community of evil.

The voice of a fitness coach at a nearby gym mingled with the solemn prayers, as did the wail of sirens and the general hum of Saturday morning traffic. Worshippers were not distracted; on the contrary, they seemed to revel in the mix, hoping the sacred would infuse the secular.

“What we did contrasts with what has been going on in our city and all this disarray,” said Carolina Ruth Valdez, who attends St. Stephen Church in Southeast Portland. “Jesus is the Prince of Peace. No Jesus, no peace.”

Valdez said she came because she wanted to give witness to a weary city that Jesus is with the people no matter what is happening. As the final prayers ended back on the cathedral steps, Valdez started a cheer: “Viva Cristo Rey!” The crowd responded enthusiastically as the cathedral bells tolled the noon hour.

Sandra Kvalheim, who lives in nearby Vancouver, Washington, said it’s important for people of faith to be seen in public promoting belief and peace. “They see your run-of-the mill Catholic on the street and see that their religion is so important to them.”

“We know we need a lot more prayer, a lot more conversation about this,” Miller told the Catholic Sentinel, newspaper of the Archdiocese of Portland. “What is happening is not the right way to go about it. The church has the answer. It’s always going back to first things. What are first principles and what is our foundation in faith? I think that will address a lot of the confusion today.”

Miller’s son Justin, a student at Holy Trinity School in Beaverton, Oregon, hopes for an end to violence and destruction. “I don’t want any more people to get hurt,” he said.

Organizers were prepared in case the half-mile Catholic procession met with violent foes. Nine burly Knights of Columbus from St. Anthony Parish in Tigard, Oregon, posted themselves around the event and kept an open eye. Everything went smoothly, said Scott Young, who led the guard. In fact, onlookers seemed fascinated and asked Young what was happening.

Langlois is managing editor of the Catholic Sentinel, official newspaper of the Archdiocese of Portland. 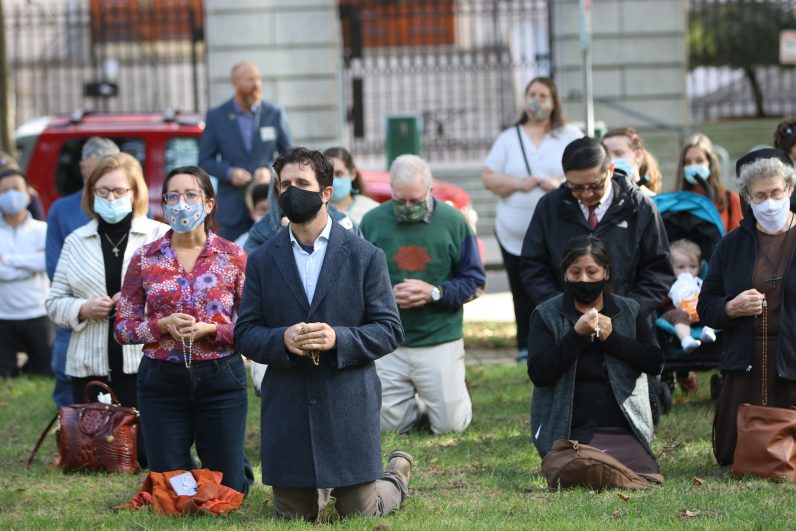 Catholics in Portland, Ore., kneel to pray a rosary for peace and justice in a downtown park Oct. 17, 2020. (Ed Langlois/Catholic Sentinel)

NEXT: In virtual seminar, Catholics urged to stand for faith in public square