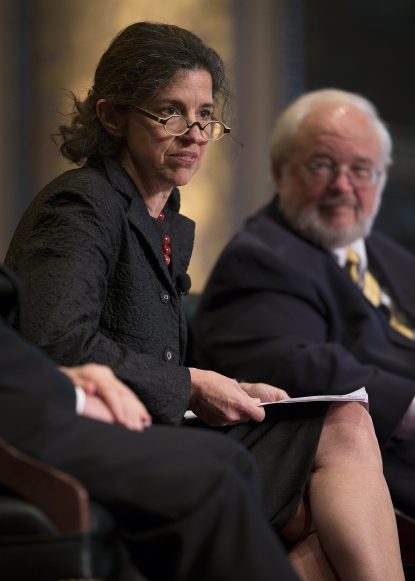 PHOENIX (CNS) — Ahead of what has been described as one of the most contentious elections in the United States, the Diocese of Phoenix offered a perspective on the role and responsibility of Catholics in the voting booth during its recent “Catholics in the Public Square Seminar” livestreamed from the diocesan pastoral center.

This biennial event normally draws several hundred attendees. But this year, pandemic restrictions limited in-person attendance for the event, and the livestream of the event received at least 3,160 views.

In his homily for a Mass opening the Oct. 3 events, Phoenix Bishop Thomas J. Olmsted said Jesus told his disciples in the day’s Gospel reading he had given them “the power to tread upon serpents’ and scorpions,” a passage the bishop said “sounds like it was meant for the desert of Arizona.”

Just as he sent the disciples, “Jesus is sending you and me as his witnesses in a nation experiencing calamity of sin, division and vitriol, to be his faithful disciples” and also “faithful citizens of our nation,” the bishop said.

This means “forming our consciences well and recognizing that there’s a hierarchy of issues that are involved, including that innocent human life is always a priority,” he explained.

The seminar shares its name with Bishop Olmsted’s booklet, which is a part of the “Shepherd’s Voice” series of booklets written by bishops from throughout the country touching on various topics. Now in its fifth edition, 350,000 copies have been printed and will be distributed to parishes throughout the diocese.

Echoing Bishop Olmsted’s remarks regarding a hierarchy of issues, Ron Johnson, director of the Arizona Catholic Conference, said there are some issues that can be debated and decided using prudential judgment, others are always wrong or intrinsically evil.

“There is a hierarchy of issues, namely in the form of abortion and euthanasia, that is paramount,” said Johnson. “All the other things we’re concerned about — and we’re concerned with a lot in our Catholic teaching — are false and illusory if we don’t start with the fundamental right, the right to life.”

In addition to being ranked the most pro-life state in the country by Americans United for Life, Arizona is No. 1 in school choice, Johnson said.

The state’s tax credit program allows for taxpayers to donate to charities, such as Catholic school tuition organizations and social service programs, like Catholic Charities.

“Their donations have just skyrocketed through these credits,” Johnson said. “The reason it’s so huge is because they come without government strings. Faith-based groups are able to utilize these credits — crisis pregnancy centers and others that otherwise would rightfully have some concerns about getting government money.”

Alan Sears, founder of Alliance Defending Freedom, a law firm dedicated to defending religious liberty cases, highlighted the history of anti-Catholicism in the United States and stressed that it is “time again for Catholics, indeed, all Christians, for all people of faith, to act, to step boldly back into the public square.”

Among the rights protected by the First Amendment is the right to worship, he said, noting that Archbishop Salvatore J. Cordileone of San Francisco has been fighting city ordinances that restrict worship to 25 people indoors and 50 outdoors — accounting for only 1% of the archdiocesan cathedral’s capacity, for example — while other businesses, such as gyms or salons that require one-on-one contact, are allowed to operate with at least 10% capacity.

“No one protesting this discrimination is suggesting that churches create a public health crisis or act irresponsibly. The church has been among the most compliant and supportive of public health measures and protecting our people while we maintain our ability to worship,” Sears said. “But our folks need and want the Eucharist.”

Helen Alvaré, a professor at Antonin Scalia Law School at George Mason University in Virginia, discussed the legal history of religious freedom, stating that in 1990’s case Employment Division, Department of Human Resources of Oregon v. Smith, the Supreme Court decided that if a state passes a law that is “neutral and generally applicable” on its face, then religion has to lose.

“In a shocking display of national unity, almost a unanimous House and Senate passed a law signed by President (Bill) Clinton, with the ACLU and the USCCB marching arm in arm toward victory,” she said, referring to the Religious Freedom Restoration Act.

But it was a three-year process to reach a carefully negotiated RFRA these various groups could come together to support, that Congress could pass and Clinton could sign in 1993.

RFRA states that even if a law is neutral on its face, if it impacts religions differently, the law cannot stand, unless the state has a compelling state interest, exercised by the least restrictive means, said Alvaré. Another Supreme Court decision ruled the act was only applicable to federal law, leading states to pass their own versions of the law.

“Then came the same-sex marriage issue, and Religious Freedom Restoration Acts were now declared an enemy of LGBT people, and almost exclusively on the strength of that issue, the old coalition of left and right fell apart,” Alvaré said, and the passage of the state versions came to a stop.

Offering an example currently headed to the Supreme Court, Alvaré mentioned the case of Catholic Social Services in the Philadelphia Archdiocese being denied the right to place foster children because it won’t place children in same-sex or cohabitating unmarried households for religious reasons. This goes against what the city mandates.

“Literally two days after (the city) withdrew permission” for the agency to continue placing children, Alvaré said, city officials announced they now “had 250 kids that they had nowhere to place.”

Alvaré said Catholics need to have a clear, robust response to these issues that combines the church’s mission with its theology “in a way that the law can understand, but also for the court of public opinion.”

“People aren’t going to have confidence if our teaching isn’t excellent, if our institutions don’t fill them with a sense of pride. And not just pride in a jingoistic sense of ‘I’m right and you’re wrong,’ but pride because it’s based in a deep intelligence and faith,” she said.

NEXT: USCCB promotes ‘Election Novena’ to pray for nation