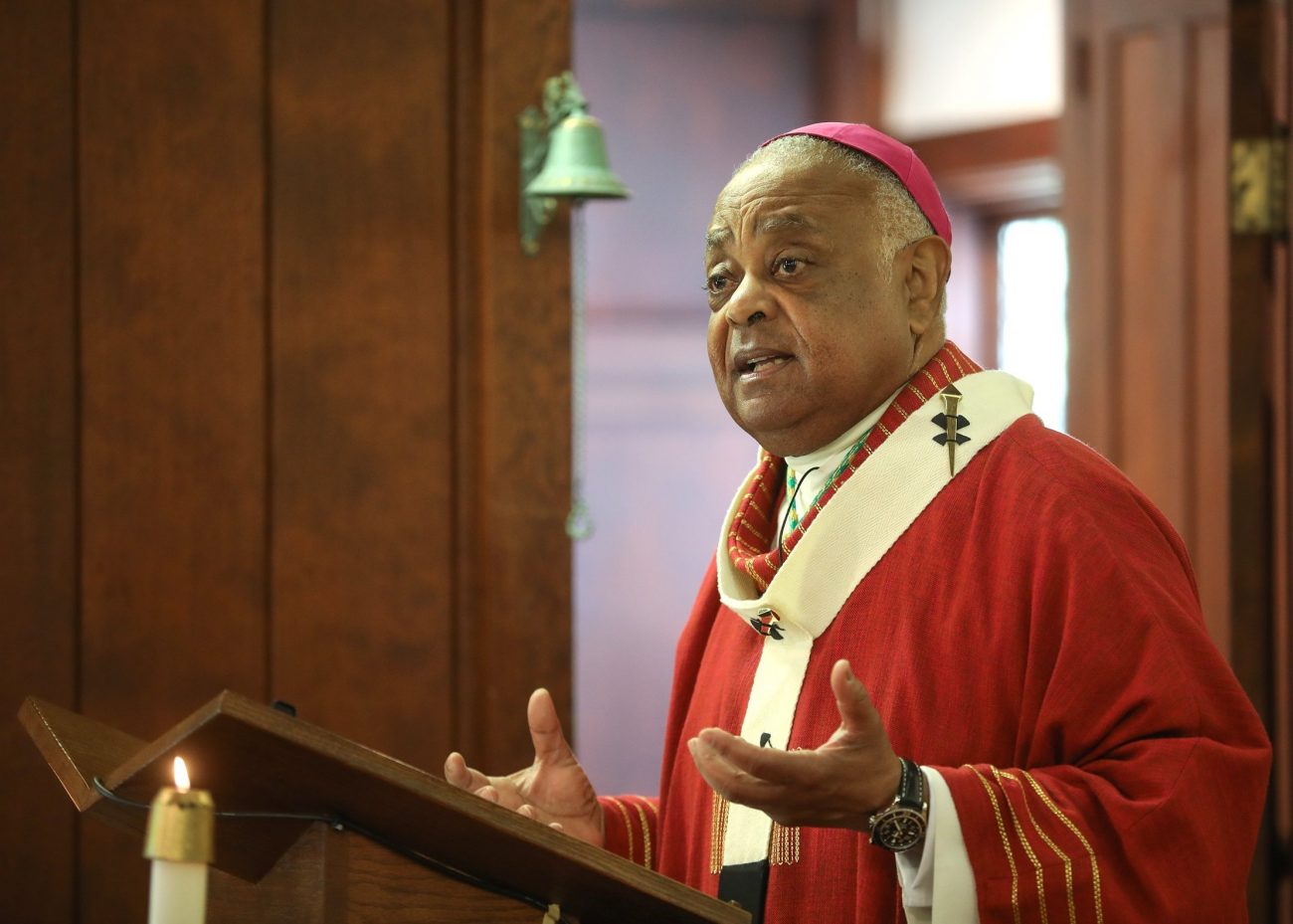 Archbishop Wilton D. Gregory of Washington was one of 13 new cardinals named by Pope Francis Oct. 25. He is pictured at Our Lady of the Wayside Church in Chaptico, Md., in this May 31, 2020, file photo. (CNS photo/Andrew Biraj, Catholic Standard)

WASHINGTON (CNS) — Cardinal-designate Wilton D. Gregory, installed as Washington’ s archbishop in May 2019, thanked Pope Francis “with a very grateful and humble heart” for naming him as one of 13 new cardinals Oct. 25.

“This appointment which will allow me to work more closely with him in caring for Christ’s church,” he said in a statement issued shortly after the pope announced new cardinals at the end of his Angelus address.

Cardinal-designate Gregory will be the first African American cardinal from the United States to be elevated to the College of Cardinals. He and the other 12 prelates will to be elevated at a Nov. 28 consistory at the Vatican.

Nine of the new cardinals are under age 80 and will be eligible to vote in a conclave; four elderly churchmen will receive red hats as a sign of esteem and honor.

In addition to Cardinal-designate Gregory, the pope chose as cardinal electors two officials of the Roman Curia and bishops from Italy, Rwanda, the Philippines, Chile and Brunei.

“Pope Francis is sending a powerful message of hope and inclusion to the church in the United States” by naming Washington’s African American archbishop as a cardinal, said Los Angeles José H. Gomez, president of the U.S. Conference of Catholic Bishops.

“As a former president of our national bishops’ conference, (Cardinal-designate) Gregory displayed generous and principled leadership. The naming of the first African American cardinal from the United States gives us an opportunity to pause and offer thanks for the many gifts African American Catholics have given the church,” Archbishop Gomez said in statement.

He asked the nation’s Catholics to join him “in praying for the continued ministry” of the newly named cardinal, who was USCCB president from 2001 to 2004.

A native of Chicago, Cardinal-designate Gregory turns 73 Dec. 7. As a sixth grader attending St. Carthage School in Chicago in 1958, he was inspired by the example of the parish priests and Adrian Dominican sisters there to become Catholic.

At the news conference when he was introduced as Washington’s new archbishop, he said, “Within six weeks of being in Catholic school and not being from a Catholic background, I said, ‘I want to be a priest.'”

Wilton Daniel Gregory was baptized as a Catholic during the Easter Vigil that school year.

Later after studying as a seminarian he was ordained as a priest of the Archdiocese of Chicago in 1973, and earned a doctorate in sacred liturgy from the Pontifical Liturgical Institute in Rome in 1980.

After serving as a parish priest in Chicago and as a master of ceremonies to Cardinals John Cody and Joseph Bernardin, he was ordained an auxiliary bishop of Chicago in 1983.

During his three years as president, the church’s clergy sex abuse crisis escalated, and under his leadership, the bishops implemented the “Charter for the Protection of Children and Young People.”

St. John Paul II appointed Bishop Gregory to serve as the archbishop of Atlanta, where he was installed in 2005 and served until Pope Francis named his as the new archbishop of Washington in 2019.

At the news conference where he was introduced as Washington’s new archbishop, Archbishop Gregory promised to work for healing in the archdiocese, which had been shaken by the clergy abuse crisis, including the resignation and removal from the priesthood of Theodore McCarrick, former Washington archbishop and cardinal, following charges that McCarrick had abused minors and engaged in sexual misconduct with adults.

“I am arriving with a commitment to transparency,” then-Archbishop Gregory said. “The only way I can serve this archdiocese is by telling the truth. I will always tell the truth.”

At his installation Mass as Washington’s new archbishop, Archbishop Gregory pointed to the Gospel story of Jesus calming the stormy seas when he was in the boat with his apostles.

“I remind you … he is here. He is here when the seas are calm, and he is here during every moment of uncertainty, anger, fear and shame. He invites us to place our trust in him,” Archbishop Gregory said.

Archbishop Gregory emphasized that same message in 2020 when the coronavirus pandemic initially caused a shutdown of public Masses and the closure of Catholic school campuses.

In a column for the Catholic Standard, Washington’s archdiocesan newspaper, Archbishop Gregory wrote that “even in the uncertainty of this current situation, if we are open, God will use this moment to bring our hearts closer to him and more firmly in union with one another.”

Following the nationwide racial protests in the wake of the death of George Floyd, who died May 25 after a Minneapolis police officer knelt on his neck for almost nine minutes during an arrest, Archbishop Gregory said in a statement that “this incident reveals the virus of racism among us once again even as we continue to cope with the coronavirus pandemic.”

Archbishop Gregory has praised peaceful protests for racial justice, saying the young people helping lead those marches offer hope for building a more just nation where all lives are respected.

Cindy Wooden in Rome contributed to this story.

NEXT: Senate confirms Amy Coney Barrett to the Supreme Court