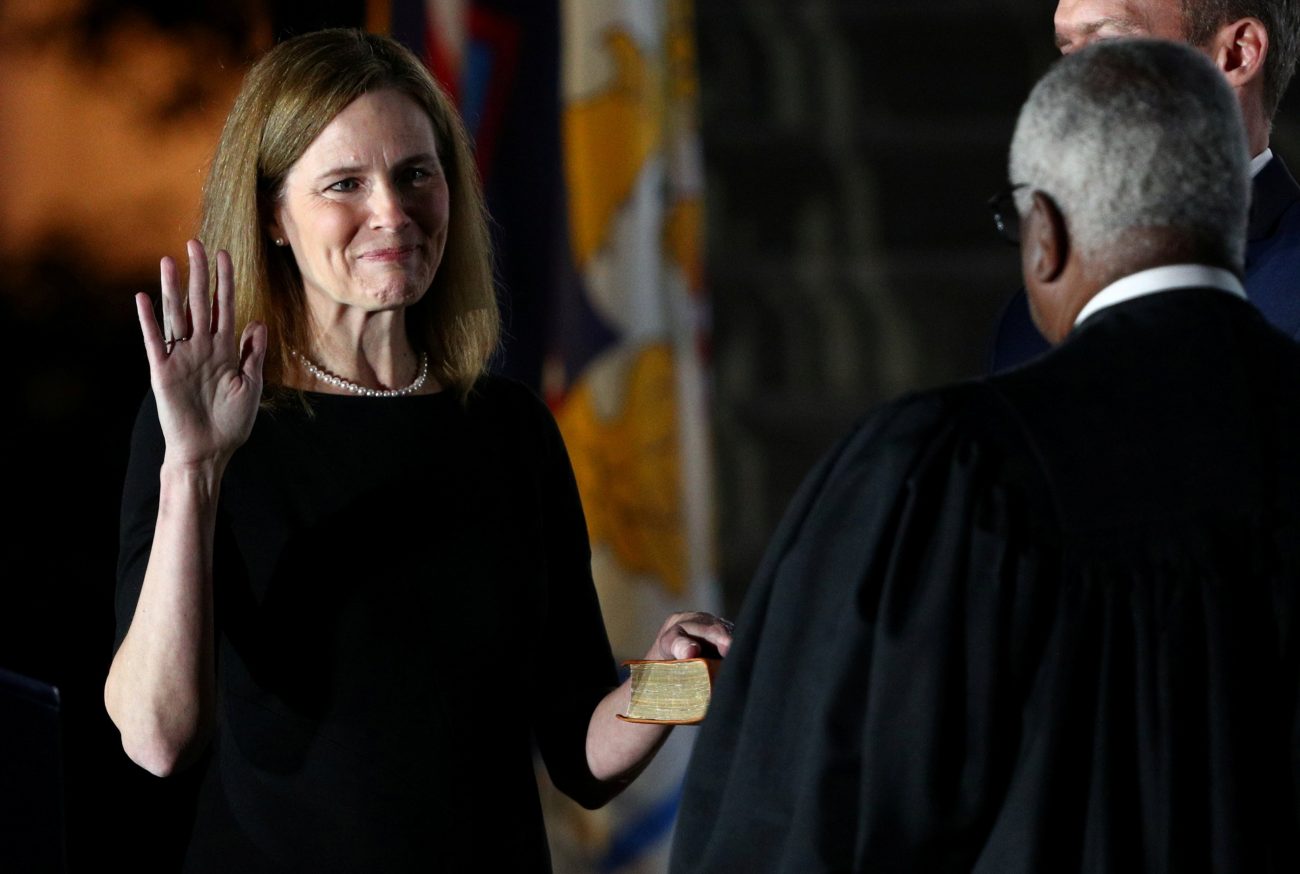 Judge Amy Coney Barrett holds her hand on the Bible as she is sworn in as an associate justice of the U.S. Supreme Court by Supreme Court Justice Clarence Thomas at the White House in Washington Oct. 26, 2020. (CNS photo/Tom Brenner, Reuters)

WASHINGTON (CNS) — A divided Senate, in a 52-48 vote, confirmed Amy Coney Barrett as a justice for the Supreme Court the evening of Oct. 26 and soon afterward she was sworn in by Justice Clarence Thomas at a White House ceremony.

“The oath that I’ve solemnly taken tonight means at its core that I will do my job without any fear or favor and that I will do so independently of both the political branches and of my own preferences. I love the Constitution and the democratic republic that it establishes and I will devote myself to preserving it,” Barrett said after the outdoor ceremony.

The 48-year old, who has been on the Chicago-based U.S. Court of Appeals for the 7th Circuit since 2017, said it was a privilege to be asked to serve on the Supreme Court. She said she was “truly honored and humbled” to be stepping into this role, which is a lifetime appointment.

Barrett is now the 115th justice for the court, replacing Justice Ruth Bader Ginsburg, who died Sept. 18. She is the sixth Catholic justice on the current bench.

Thomas administered the constitutional oath to Barrett, who was to take the judicial oath in a private ceremony at the Supreme Court Oct. 27.

Reaction to the confirmation was swift and just as divided as it has been since she was first announced as President Donald Trump’s nominee just weeks before the presidential election. Congressional Democrats took to Twitter to criticize the Senate for acting so swiftly on this vote but not passing a COVID-19 relief package.

The Associated Press reported that no other Supreme Court justice has been confirmed on a recorded vote with no support from the minority party in at least 150 years, according to information provided by the Senate Historical Office. 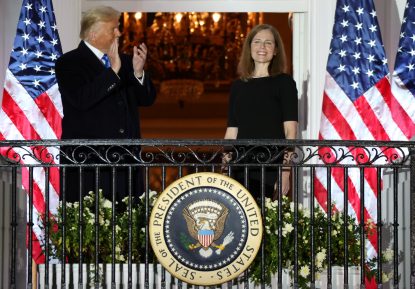 President Donald Trump applauds U.S. Supreme Court Associate Justice Amy Coney Barrett after she took her oath of office and was sworn in to serve on the court at the White House in Washington Oct. 26, 2020. (CNS photo/Jonathan Ernst, Reuters)

During her nomination hearings before the Senate Judiciary Committee, Barrett did not give direct answers on how she would vote on top issues but assured the senators that she would follow the rule of the law.

“My policy preferences are irrelevant,” she said, Oct. 13 when asked if she had intended to dismantle the Affordable Care Act, and she reiterated this same view when asked about abortion and same-sex marriage.

On the opening day of the hearings, Republican senators adamantly emphasized that Barrett’s Catholic faith should not be a factor in questioning. And although it did not become a topic of questioning, it was mentioned even in opening remarks by Senate Judiciary Committee Chairman Lindsey Graham, R-South Carolina.

He asked if Barrett would be able to set aside her religious beliefs to fairly decide legal cases, which she said she could.

The oldest child of the couple’s seven children is a current student at the University of Notre Dame. Amy Coney Barrett began working at the law school in 2002 as a law professor focused on federal courts, constitutional law and statutory interpretation.

G. Marcus Cole, the Joseph A. Matson dean at Notre Dame Law School, said the school is “immensely proud of our alumna, colleague and friend,” adding that for more than two decades the school has experienced Barrett’s “brilliant scholarship, her devoted teaching and her thoughtful, open-minded approach to legal questions.”

He also praised Barrett’s “exemplary kindness and generosity toward everyone she encounters” and said that while the school community would miss her presence they would “look forward to witnessing these qualities as she serves on our nation’s highest court.”

During the Senate Judiciary hearing, an open letter to Barrett signed by 100 Notre Dame professors was published online urging her to put a “halt” to the nomination process until after election. The letter emphasized this would allow “voters to have a choice” in the next judge on the nation’s high court.

“We at NCR do not like the prospect of five of the six conservative justices being Catholic and worry what that says about our church. In America, however, there are no religious tests for office and no senator should oppose Barrett on account of her religion.” It went on to say it was Barrett’s “bad faith in discussing the law that warrants disqualifying her.”

After the Senate vote, some Catholic bishops congratulated Barrett on Twitter.

Bishop J. Strickland of Tyler, Texas, said in an Oct. 26 tweet: “Thanks be to God that Amy Coney Barrett was approved as our newest Supreme Court Justice. Let us pray that she serves always guided by the truth God has revealed to His people. Immaculate Virgin Mary intercede for her.”

Similarly, Bishop Richard F. Stika of Knoxville, Tennessee, tweeted his congratulations and added: “Note to the Democrats. Justice Ginsburg was against packing the SC!” He was referring to a plan by President Franklin D. Roosevelt that has recently been touted by progressive Democrats to increase the number of justices on the court.

New Orleans Archbishop Gregory M. Aymond issued a more personal statement, pointing out that Barrett is from Metairie, Louisiana, and that her parents, Deacon Michael Coney and his wife, Linda, are members of St. Catherine of Siena Parish in Metairie.

“One of our own, Judge Amy Coney Barrett, has been confirmed by the U.S. Senate as an associate justice of the Supreme Court,” he said. “We pray that the Holy Spirit will continue to lead her and guide her in her service to our country.” 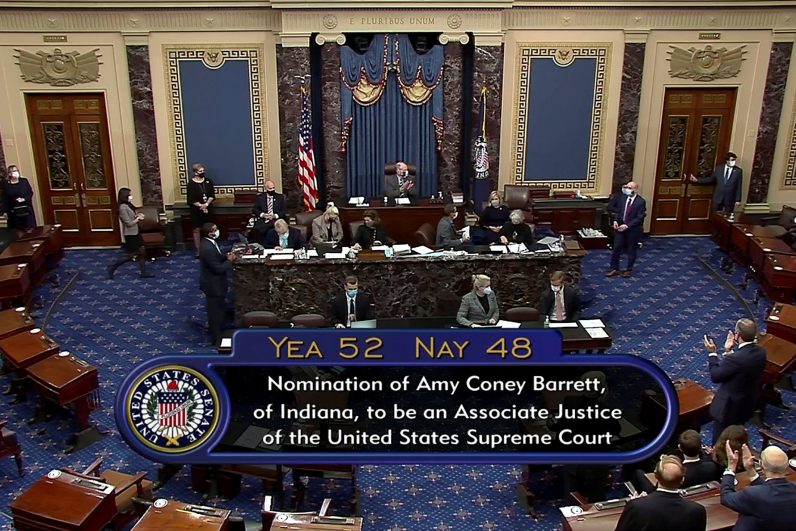 The tally is shown as the U.S. Senate votes on the confirmation of President Donald Trump’s nominee Judge Amy Coney Barrett to be an associate justice of the U.S. Supreme Court Oct. 26, 2020. (CNS photo/U.S. Senate TV, Handout via Reuters)