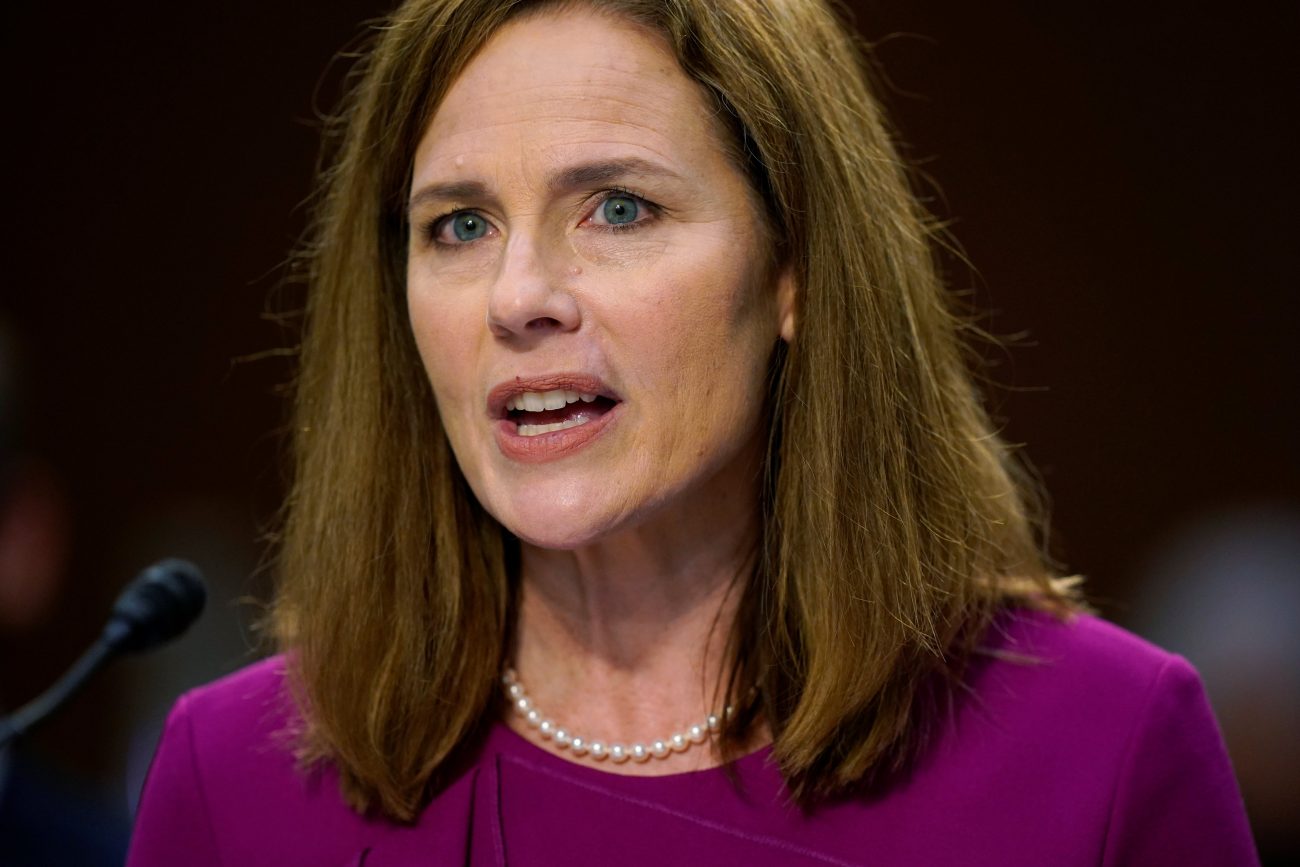 Judge Amy Coney Barrett of the U.S. Court of Appeals for the 7th Circuit, President Donald Trump's nominee for the U.S. Supreme Court, speaks during her confirmation hearing before the Senate Judiciary Committee on Capitol Hill in Washington Oct. 12, 2020. (CNS photo/Patrick Semansky, Pool via Reuters)

Democratic senators homed in on concern that Barrett’s confirmation would lead to a vote to potentially overturn the Affordable Care Act when the legislation comes before the nation’s high court in November.

Republican senators emphasized the nominee’s qualifications for the role and stressed that her Catholic faith, which was raised in her 2017 questioning before a Senate committee for her federal judiciary nomination, shouldn’t be an issue in the current proceedings.

Indiana senators who introduced Barrett, remotely, to the committee near the end of the five hours of discussion about her, highlighted Barrett’s judicial talents and also emphasized that her Catholic faith should not come into question. Sen. Todd Young, R-Indiana, also pointed out that in his state: “Faith is seen as an asset in public service.”

In her remarks, Barrett said she was “honored and humbled” to be nominated to the Supreme Court. She spoke of her husband, their seven children, her siblings and her parents. She mentioned the “the devoted teachers at St. Mary’s Dominican,” the girls high school she attended in New Orleans, and she also mentioned that if she were confirmed, she would be the only justice on the bench not from Harvard or Yale but the University of Notre Dame.

Other than the school references, Barrett’s only remark about her faith came after thanking people for their support in recent weeks. She added: “I believe in the power of prayer, and it has been uplifting to hear that so many people are praying for me.”

In giving an indication of her judicial philosophy, she said: “Courts have a vital responsibility to enforce the rule of law … but courts are not designed to solve every problem or right every wrong in our public life. The policy decisions and value judgments of government must be made by the political branches elected by and accountable to the people.”

She said she tried to follow that view as a judge, “mindful that, while my court decides thousands of cases a year, each case is the most important one to the parties involved.”

At the start of the hearings, Sen. Lindsey Graham, R-South Carolina, who is chairman of the Senate Judiciary Committee, pointed out the four-day process prior to sending the nomination onto the full Senate for a vote would be a “long contentious week.”

He also noted the proceedings were “not about persuading each other unless something really dramatic happens.” He predicted that “all the Republicans will vote yes, all the Democrats will vote no” for President Donald Trump’s nominee to fill the Supreme Court seat left vacant by the Sept. 18 death of Ruth Bader Ginsburg.

“Nothing about this today is normal,” said Sen. Cory Booker, D-New Jersey, in the middle of the first day of introductory remarks by members of the committee, noting the country is in the middle of holding a presidential election and battling the coronavirus pandemic.

Signs of coronavirus precautions were obvious in the room itself where senators were socially distanced and wore masks while bottles of hand sanitizer and plastic containers of bleach wipes were visible on the counters. The hearing room also did not have the usual crowds these events typically draw, and a few senators participated remotely.

Two members of the Senate Judiciary Committee had tested positive for COVID-19 earlier, but those in the Senate hearing room were not required to be tested for the coronavirus before taking part in the hearing in the enclosed room, as some of the Democratic senators mentioned.

Prior to the hearings, protesters and supporters of Barrett’s nomination gathered outside in the rain to express their views with signs such as “Let the people decide!” or “Women for Amy.”

During the hearing, Barrett sat at a table across from the senators, and her husband and six of their children sat behind her.

Sen. Dianne Feinstein, D-California, the senior Democrat on the committee, started the discussion with a trend that was followed by her fellow Democrats, voicing an overriding concern that with Barrett’s confirmation “Americans stand to lose the benefits that the ACA provides.”

On Nov. 10, the court will hear oral arguments about the health care law, often called Obamacare, for the third time in a case brought by 18 Republican state attorneys general and supported by the Trump administration.

As a judge for the U.S. Court of Appeals for the 7th Circuit, Barrett did not hear any cases dealing with the ACA. But in 2017, she wrote a paper in the Notre Dame Law School journal that was critical of Chief Justice John Roberts’ majority opinion in the 2012 ruling, saying he “pushed the Affordable Care Act beyond its plausible meaning to save the statute.”

This quote was mentioned by several Democratic senators, many of whom referred to and showed poster-sized pictures of their constituents suffering from health problems who they said would lose their health insurance if ACA is dismantled.

A few Democrats brought up the Supreme Court’s Roe v. Wade decision legalizing abortion, saying it also stood in the balance with Barrett’s nomination. Several of them described the current hearings as a “sham” or “charade” for being rushed through amid the election and the pandemic.

Republicans highlighted Barrett’s qualifications and many of them brought up the issue of her Catholic faith, which had come up in her 2017 hearings. Several made reference to a comment made at the time by Feinstein, who told her: “The dogma lives loudly within you, and that’s a concern.”

Feinstein was referring to Barrett’s speeches and a 1998 article she co-wrote about the role of Catholic judges in death penalty cases. The senator also questioned Barrett about upholding Roe v. Wade.

Sen. Ben Sasse, R-Nebraska, said the confirmation hearings should be about civics, not politics, and stressed that the senators should not get into religious tests of a court nominee or try to determine “whether ‘the dogma lives too loudly’ within someone.”

Sen. Josh Hawley, R-Missouri, similarly recalled the questioning Barrett received in 2017 and said it reflected a “the very terminology of anti-Catholic bigotry.”