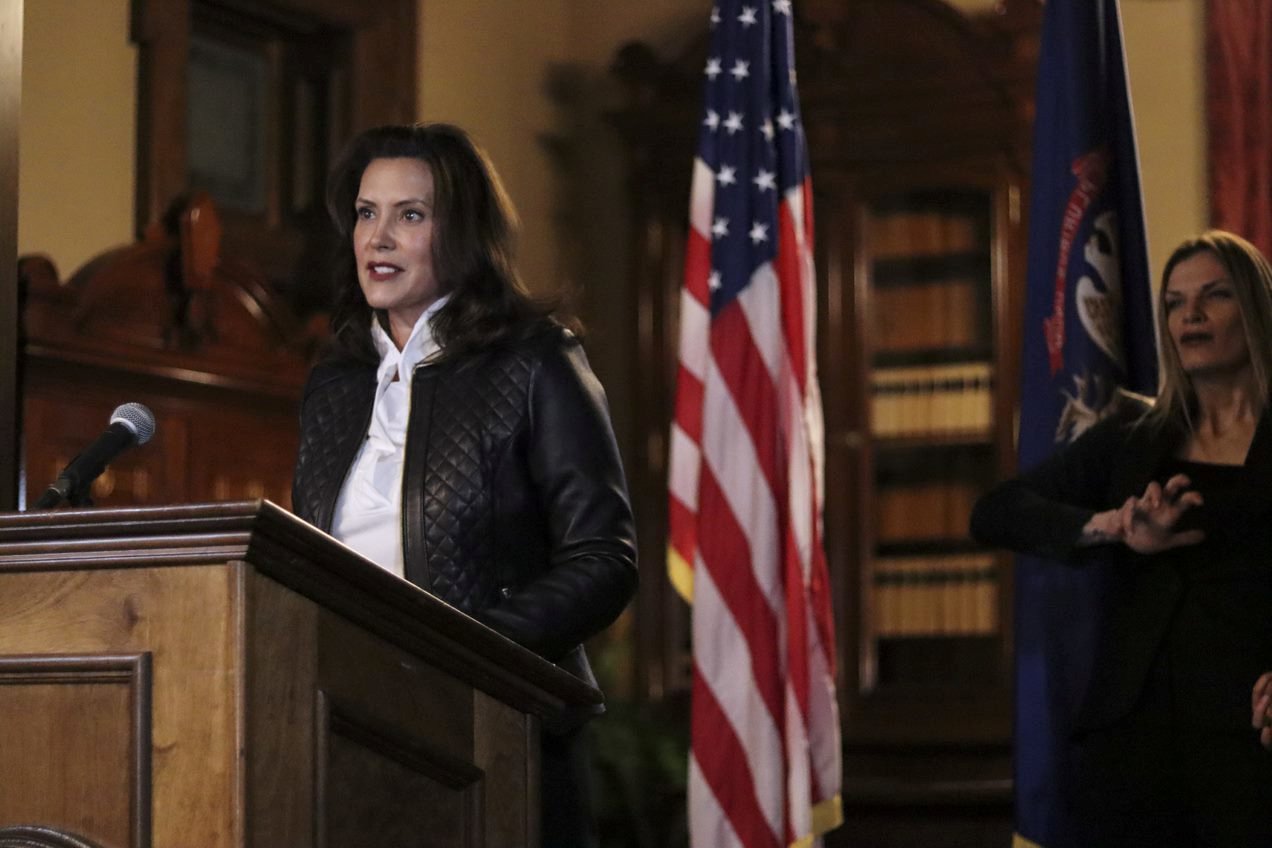 Michigan Gov. Gretchen Whitmer speaks during an Oct. 8, 2020, news conference in Lansing, Mich., after 13 people, including seven men associated with the Wolverine Watchmen militia group, were arrested and charged with a plot to take Whitmer hostage and attack the state Capitol building. (CNS photo/Michigan Governor's Office via Reuters)

GAYLORD, Mich. (CNS) — A Michigan Catholic bishop and the leadership of the Adrian Dominican sisters offered prayers of thanksgiving that Gov. Gretchen Whitmer was safe after the FBI foiled an alleged plot to kidnap Michigan’s chief executive.

Several of those involved were federally charged with conspiracy to kidnap.

“I am deeply saddened and disturbed by this threat against Governor Whitmer,” Bishop Walter A. Hurley, apostolic administrator of the Gaylord Diocese, said in an Oct. 8 statement.

“On behalf of the Diocese of Gaylord, I would like to express our thanksgiving for Governor Whitmer’s safety and our gratitude to law enforcement whose swift action protected her from this tragedy,” he said. “The governor and her family are in our prayers during this difficult time.”

Bishop Hurley said hostage taking and kidnapping “are egregious acts of terrorism that demonstrate a shocking disregard for the dignity of the human person.”

“As Catholics, we firmly believe that such acts are morally reprehensible, gravely going against the intrinsic values of life, justice and charity,” he added. “Such evil should trouble us all. Instead of hatred and animosity — which breed violence and terrorism — we are called to love one another.”

In an Oct. 9 letter to Whitmer, the general council of the Adrian Dominican Sisters similarly said they offered a prayer of thanksgiving for the governor’s safety and decried the alleged kidnapping plot.

“We are appalled and horrified by news of the alleged plot by a Michigan terrorist group to kidnap and take you hostage as part of a larger anti-government plan to ‘instigate a civil war,'” the sisters said. “No elected leader in a democracy should ever face the threat of armed assault.

“We write to express our support and prayers for you and your family in the face of this terrifying threat, and to speak out unequivocally against those who would take political differences — the essence of our democracy — to such violent and extreme ends.”

CNN reported that 13 people were charged Oct. 8 in an alleged domestic terrorism plot to kidnap Whitmer.

“The alleged scheme included plans to overthrow several state governments that the suspects “believe are violating the U.S. Constitution,” including the government of Michigan and Whitmer, CNN said, quoting according to the federal criminal complaint.

“Six people were charged federally with conspiracy to kidnap, and seven other people, associated with the militia group “Wolverine Watchmen,” were charged by the state,” the cable news outlet said.

In their letter, the Dominican sisters called it “both shocking and deeply saddening” that such hatred and division is alive in the hearts of fellow Michiganders, who allegedly are affiliated with an extremist white supremacist group known as the Wolverine Watchmen.”

“It is a chilling reflection on the state of divisiveness and discord in our country and the urgent need for words of healing, reconciliation and unity to be spoken from the White House and Congress, and by elected leaders at all levels of government,” they said.

Whitmer has faced backlash from many Michiganders for her closure rules she has implemented to “flatten the curve” of COVID-19 cases. Since March, she has issued over 180 executive orders in response to the coronavirus pandemic.

On Oct. 2, the Michigan Supreme Court ruled she lacks the power to issue these executive orders without consent from the Legislature.

NEXT: Brooklyn bishop says diocese not deterred by ruling against temporary stay