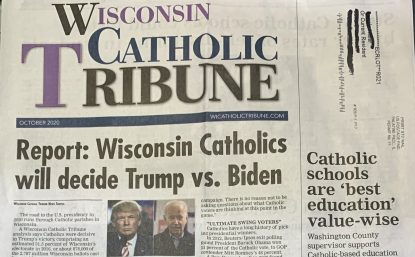 This is the front page of the Wisconsin Catholic Tribune, which was mailed to Catholic homes around the state ahead of the Nov. 3 presidential election. The Compass, the official Catholic newspaper of the Diocese of Green Bay, Wis., reported that it is not known how the Tribune’s publisher received addresses and names of Catholic families. (CNS photo/Sam Lucero, The Compass)

GREEN BAY, Wis. (CNS) — Ahead of the Nov. 3 presidential election, a publication mailed to Catholic homes around Wisconsin is seeking to influence the vote of readers.

The unofficial Catholic publication, called the Wisconsin Catholic Tribune, is familiar to readers of The Compass, the official newspaper of the Diocese of Green Bay. In June, the paper published a report about the Tribune, which is not affiliated with any official Catholic entity.

The June 12 story, “Website uses Compass content in violation of copyright law,” revealed the Wisconsin Catholic Tribune was taking stories from The Compass and other diocesan newspaper websites and using them on its own website.

After the story was published, the Tribune stopped the practice and instead has been using information from parish bulletins and websites.

On Oct. 22, less than two weeks before Election Day, members of the diocese began receiving the eight-page broadsheet, which is published and owned by Franklin Archer Publishing in Chicago. Among those receiving a copy was Frank Ingram of Howard. He contacted The Compass Oct. 23.

“It was clearly a political hit job,” Ingram said. “My initial impression was that this was intended as an official publication of the Catholic Church.”

The paper includes a listing for contacts in each of Wisconsin’s five dioceses, with the names and email addresses of each diocesan bishop. The list, under the heading of “Contact your local diocese,” gave the newspaper more credibility, said Ingram.

“I’m pleased to learn that this is not” an official Catholic publication, Ingram told The Compass. “It seems to be lacking in some of those Christian tenets, such as love your neighbor. … It’s very selective in its choice of the positions of the church it chose to represent. I think the worst thing about it, essentially, is it’s purporting to be something when it’s not.”

Father John Girotti, vicar for canonical services and associate moderator of the Curia for the Diocese of Green Bay, said that no private entity “has the right to call itself Catholic without the approval of the local bishop.”

“Being that the newspaper in question is an instrument of social communication, the bishops of the church have a role in reviewing what it teaches,” Father Girotti told The Compass. “To my knowledge, the Wisconsin Catholic Tribune, has no direct connection to any diocese or bishop in the church.”

In its June 12 story, The Compass reported that Franklin Archer has a history of publishing online secular newspapers as a way to push out political messages before the elections. One of Franklin Archer’s publications, the print edition of Hinsdale School News, was the target of a Michigan Daily newspaper investigation for potentially violating election law “by attempting to influence the vote on a $140 million school district referendum.”

The New York Times reported Oct. 20 that Franklin Archer is part of a network operating nearly 1,300 websites that seek to fill a void left by vanishing local newspapers. “But many of their stories are ordered up by conservative political groups and corporate PR firms,” the Times reported.

Most of the articles in the Wisconsin Catholic Tribune are related to the presidential election, including a voter guide, results of polls it conducted on its Facebook page and opinion articles written by two advisers to President Donald Trump’s campaign.

However, in its “About us” section, the newspaper claims that “nothing in this publication is intended to advocate for or endorse a particular political candidate or party.”

The Compass reached out to Franklin Archer at a phone number it listed for subscription information. It received a voicemail and left a message. As of Oct. 25, the company had not returned the call.

Kim Vercauteren, executive director of the Wisconsin Catholic Conference, said the Tribune’s direct-mail publication is a reminder to Catholics that not all material has the blessing of the church.

“There are a lot of entities operating in Wisconsin this election season that use the word ‘Catholic’ in their title, thereby implying that they have some formal affiliation with the Catholic Church,” Vercauteren told The Compass in an email.

“In actuality, these are entities organized by lay Catholics and non-Catholics, sometimes even campaign-affiliated representatives. They do not represent the Catholic Church in an official capacity,” she said.

“Unlike our diocesan Catholic newspapers, magazines and national media outlets like the Catholic News Service, they have no formal connection to a bishop or church authority, and therefore, are not required to follow church teaching and guidelines, including those that prohibit candidate opposition or endorsement,” she added.

Vercauteren said that Catholics have a source for official church positions on electoral politics.

“For Catholics who wish to understand official church teaching on electoral politics, I would direct them to what the Wisconsin bishops wrote in their ‘Faithful Citizenship’ series, wisconsincatholic.org/faithful-citizenship, which is based on the U.S. Conference of Catholic Bishops’ ‘Forming Consciences for Faithful Citizenship’ (faithfulcitizenship.org).”