As refugees increase, German Catholics work to include Eastern Catholics 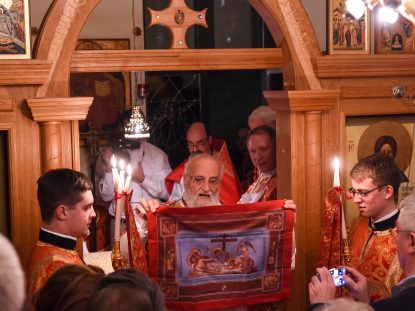 Syriac Patriarch Gregoire III Laham of Damascus is pictured in a file photo during the consecration service of a chapel in the Jesuit College Sankt Georgen in Frankfurt, Germany. Germany’s bishops have pledged to improve the integration of Eastern Catholics in their church, as part of ongoing plans to help migrants and refugees. (CNS photo/Harald Oppitz, KNA)

OXFORD, England (CNS) — Germany’s bishops have pledged to improve the integration of Eastern Catholics in the predominant Latin-rite church, as part of ongoing plans to help migrants and refugees.

“The Catholic Church in Germany is changing and the life of our parishes becoming more diverse — faithful from Eastern Catholic Churches are living with us and finding their home here,” the bishops’ conference said. “This diversity of Catholic Church traditions should be kept alive, so migrants and refugees can be integrated into our community without losing their own identity.”

“They belong to the Catholic Church but come from different Eastern church traditions. Their developed patterns of liturgy and church law deserve to be valued and cherished.”

The statement, signed by Archbishop Stefan Hesse of Hamburg, chairman of the bishops’ Migration Commission, and Auxiliary Bishop Dominicus Meier of Paderborn, the bishops’ representative for Eastern Catholics, accompanied new guidelines for pastoral care of Eastern Catholics lacking their own priests and pastors.

Germany is currently home to 1.77 million registered refugees, according to Interior Ministry data, with a further 450,000 registered as asylum-seekers or “tolerated persons.”

The independent Hamburg-based Statista research center reported Oct. 5 the highest number of new arrivals so far in 2020 — more than 21,700 — had come from Syria, home to four separate Eastern Catholic Churches. Thousands more have come during the year from Iraq, Turkey and Eritrea, also home to Eastern Catholic communities.

Eastern Catholics are in full communion with the pope while retaining their own liturgical and canonical traditions. In Germany, their presence increased after the European Union’s eastward expansion in 2004, and again after the mass influx of refugees in 2015, and the country is now home to Coptic, Ethiopian, Syriac, Maronite, Armenian, Chaldean and Melkite Catholic communities.

While most of Germany’s 27 dioceses had commissioners for Eastern Catholics, the statement said, the new 30-page guidelines were needed to clear up uncertainties over whether Roman Catholic clergy could minister and dispense sacraments to them.

Although ties between Roman and Eastern Catholics were codified by the 1962-65 Second Vatican Council, procedures for ministering to Eastern Catholics without their own parishes and clergy have posed problems in various European countries.

Eastern Catholics also can belong to parish councils and management committees if they met residence and attendance requirements, the statement added.

“Most members of Eastern Catholic churches living in Germany are Ukrainian Catholics or Greek Catholics from other European countries,” the spokesman said.

“We estimate the numbers of believers belonging to Eastern Catholic churches based in the Middle East at 10,000-30,000, although we cannot fix a more precise figure since the German registration system does not specify this,” he said.

PREVIOUS: Pope accepts resignation of bishop accused of failing to act on abuse