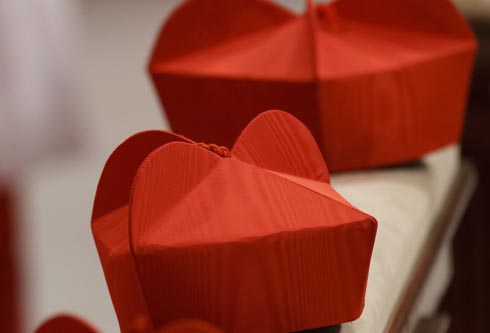 VATICAN CITY (CNS) — With Pope Francis’ new picks for the College of Cardinals, the body will be more religious than ever — in the sense that the number of cardinals coming from religious orders will rise to 51.

The Jesuit pope’s confreres do not lead the tally; in first place are members of the Salesian order, which has nine cardinals. The Jesuits come next with seven.

Thanks to Pope Francis’ nominations Oct. 25, the cardinal-followers of St. Francis of Assisi would be tied with the Salesians if it weren’t for the fact that they live out their vows in three different communities: the Friars Minor, the Capuchins and the Conventual Franciscans.

Two Capuchins, a Conventual Franciscan and a Scalabrinian are among the 13 new cardinals Pope Francis plans to create during a consistory Nov. 28.

Those who will receive their red hats come from eight countries, including Brunei and Rwanda, which have never had cardinals before. They will bring the total number of cardinals to 231 from 91 countries.

For the first time, the number of countries represented by members of the College of Cardinals will go over 90; it was only three years ago — at the consistory to create cardinals in June 2017 — that the number first topped 80 nations. 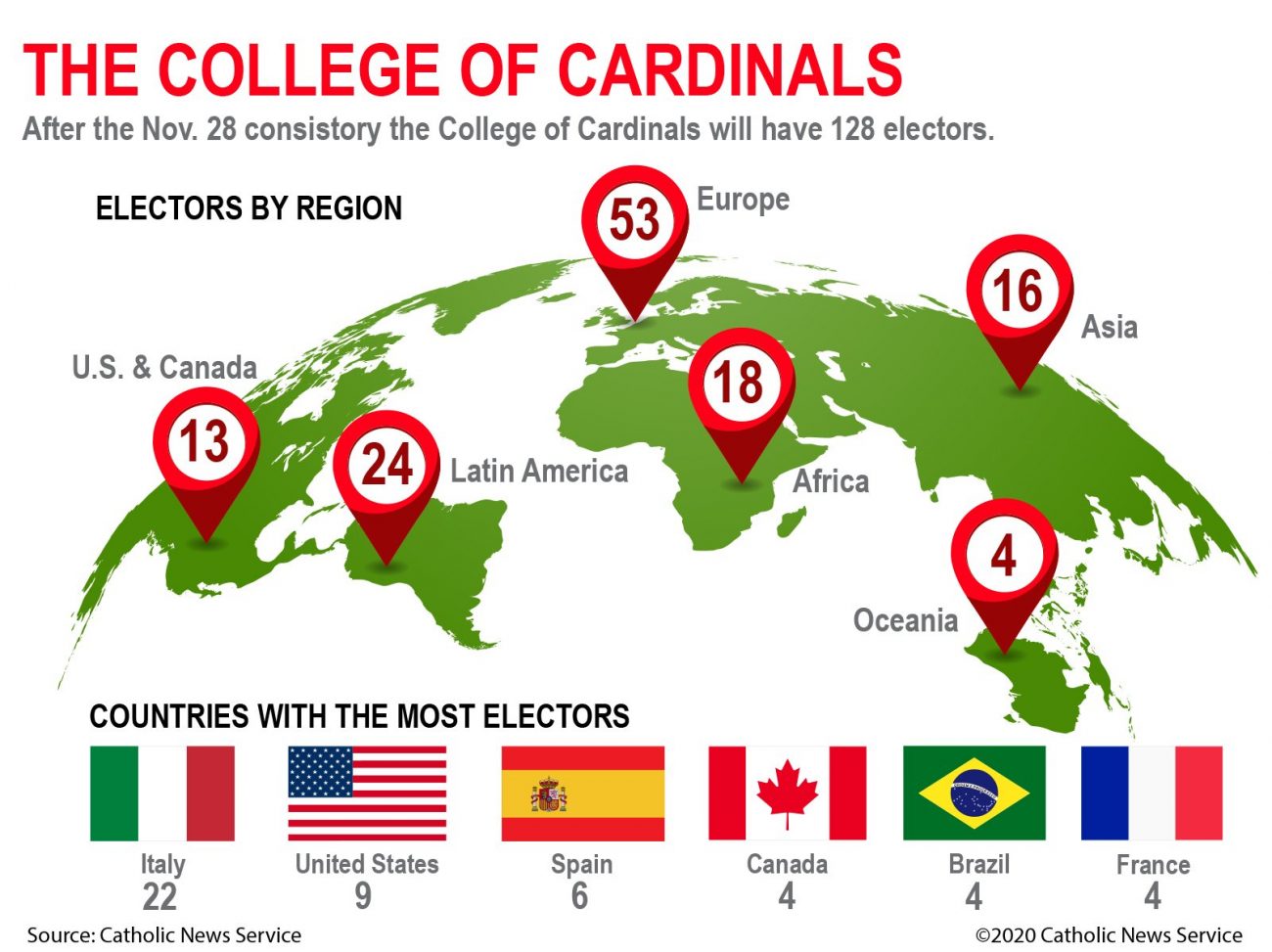 The College of Cardinals will have 128 electors after the Nov. 28 consistory. (CNS graphic/Todd Habinger, The Leaven)

Eighty is a significant number for the College of Cardinals. Since 1971, according to a law issued by St. Paul VI, when a cardinal celebrates his 80th birthday, he is no longer eligible to enter a conclave to elect a new pope.

Four of the churchmen chosen by the pope in October already have turned 80, so their nominations are seen as a papal plaudit for a life of extraordinary ministry: Archbishop Silvano M. Tomasi, 80, is a dual Italian-U.S. citizen long involved in ministry to migrants; Mexican Bishop Felipe Arizmendi Esquivel, the 80-year-old retired bishop of San Cristobal de las Casas, has long been recognized for his care of indigenous people; Italian Father Enrico Feroci, 80, is former director of Rome’s Caritas; and Italian Capuchin Father Raniero Cantalamessa, 86, has been preacher of the papal household for 40 years.

On the younger side, after the November consistory, there will be 128 cardinals eligible to enter a conclave, and they will come from 67 nations.

With 53 electors, Europeans will continue to have the largest number, but the situation is unlikely ever to be a repeat of the 1922 conclave when only 53 cardinals — all Europeans — entered the Sistine Chapel to choose the successor to Pope Benedict XV. The two eligible U.S. cardinals, one from Canada and one from Brazil did not arrive in time to participate. Since then, the amount of time between a papal death and the election of his successor has been expanded, but air travel also is a factor.

When the new cardinals are created, the geographical distribution of the electors will be: just over 41% from Europe; 14% from Africa; 10% from the United States and Canada; almost 19% from Latin America; 12.5% from Asia; and 3% from Oceania.

Italians, including Cardinal Mario Zenari, nuncio to Syria, will have the largest group of voters with 22. The United States will be next with nine electors, followed by Spain with six, and Brazil, Canada and France with four each.

The youngest of the new cardinals is Franciscan Father Mauro Gambetti, custos of the Sacred Convent of Assisi, Italy, who turned 55 Oct. 27. Two other cardinals are younger than he is: Portuguese Cardinal Jose Tolentino Calaca de Mendonca, Vatican archivist and librarian, is 54; and Cardinal Dieudonne Nzapalainga of Bangui, Central African Republic, is 53.